DEDRYCK BOYATA was in good spirits when he returned to training yesterday and looks set to play at Parkhead on Sunday.

There were doubts about the Belgian’s availability for the visit of Steven Gerrard’s Ibrox side when he quit his nation’s Euro 2020 squad in mysterious circumstances last week, as CQN reported.

Boyata had been due to travel to Cyprus for Sunday’s Euro qualifier, but was excused for “personal reasons”.

That sparked fears the 28-year-old centre-back could miss the weekend encounter.

But the classy back-four operator returned to Lennoxtown yesterday to put in a full shift with his team-mates as they prepared for the game that could see them move THIRTEEN points clear at the top of the Premiership in their bid to win an eighth successive crown.

However, there was no sign of Kieran Tierney who faces a late fitness battle to be ready. The left-back was forced to withdraw from the Scotland Euro 2020 squad after sustaining a calf knock. 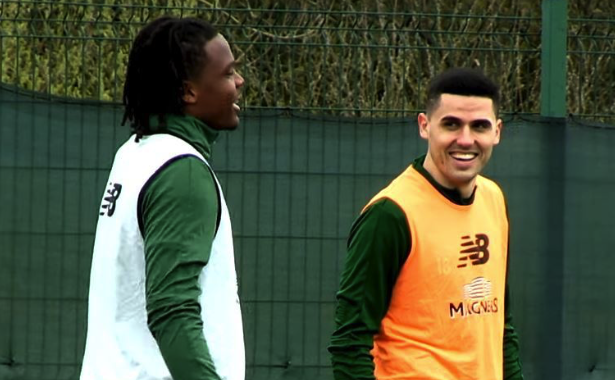 KT has been receiving treatment from the Hoops’ medical staff and will be given until the last minute before Neil Lennon announces his line-up.

Long-term crocks Tom Rogic and Olivier Ntcham, who haven’t made an appearance in 2019, have stepped up their comebacks.

The midfield double-act have both been missing with knee injuries, but are now back training with the Frenchman a possibility to get a place on the subs’ bench, at least.

The game may have arrived too early for the Australian international who last played for the champions in the remarkable 4-3 triumph over Aberdeen at Pittodrie on Boxing Day.

Lennon has also been boosted by the return of young right-back Anthony Ralston.

The 21-year-old hasn’t played since suffering ankle ligament damage in the 3-0 Scottish Cup win over Airdrie in January.

But the defender is making steady progress and will provide opposition to Mikael Lustig and Jeremy Toljan for the No.2 position in the silverware run-in and the quest for the unprecedented treble treble.