DEDRYCK BOYATA’S debut season at Hertha Berlin is in jeopardy after the former Celtic central defender was struck down with a torn muscle in his groin.

The Belgian international, who quit the champions for the Bundesliga outfit at the end of his contract in the summer, has just recently returned from injury.

Boyata’s last appearance for the Hoops came in the 2-1 win over Steven Gerrard’s Ibrox side at Parkhead on March 31. He limped off in the 74th minute to leave the Hoops with 10 men after Neil Lennon had utilised his three substitutes. The score was tied at 1-1 before James Forrest claimed the late winner.

The former Manchester City centre-half sat out the remainder of the campaign as his four years at Parkhead came to a conclusion. 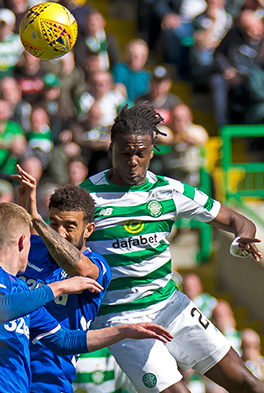 LAST ACTION HERO…Dedryck Boyata heads the ball clear from Connor Goldson in his final appearance as a Celtic player in March.

A thigh injury sustained in training delayed his debut for his new side at the start of the current campaign. He played 80 minutes against Mainz last month, but has made only five other appearances before this latest setback.

Twenty-eight-year-old Boyata was forced to come off during the 3-2 defeat to Hoffenheim in the Bundesliga at the weekend.

Manager Ante Covic fears the worst about the player’s most recent blow.

In a report in the Daily Record, he admitted: “Dedryck will go away to get scans this week, but it looks like a serious groin muscle injury.”

Hertha are currently 11th in the 18-team league with with only three wins from nine games.