DEDRYCK BOYATA, red-carded against Hamilton, is free to line up against Dundee at Parkhead tomorrow night.

The Belgian international defender was dismissed after a challenge on Carlton Morris during the first half of the 1-1 draw with Accies at New Douglas Park on Friday.

Ronny Deila initially agreed with referee Craig Thomson’s decision, but, after reviewing TV footage of the incident, the Hoops boss has decided to lodge an appeal against the sending-off.

That allows Boyata to fac 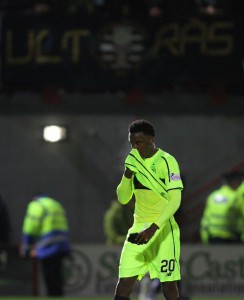 The champions, who are aiming for a sixth successive home victory, are six points clear of Aberdeen who face Dundee United at Tannadice.

Deila said: “It’s a long season, especially when you start talking about winning the league in September.

“There will always be hard weeks. But we are calm and focused. We need to improve to get the results. If we can do that we will have a good chance.

“What Aberdeen are doing is up to them. When we get to the split and there are five games left we will see better if we have a title race or not.

“Hopefully, it’s not. But if we both keep winning games then it will be tight the whole way.”

Dundee face an anxious wait on the fitness of former Celtic centre-half Darren O’Dea and Thomas Konrad ahead of the trip to Glasgow.

O’Dea, who spent six years at Parkhead, has a groin strain while Konrad failed a fitness test on his ankle before the Tayside club’s 1-1 stalemate with Inverness Caley Thistle at the weekend.

Order your copy of  THE QUALITY STREET GANG by Paul Dykes for only £9.99 and receive a free copy of CQNAnnual, issue 3 with your order.