CELTIC have not conceded a goal since Dedryck Boyata’s controversial and delayed comeback to the first team five games ago.

The Belgian World Cup centre-back appeared to down tools when the champions knocked back a £9million bid from Fulham last month.

Boyata missed the trip to Greece where an error-strewn defensive display saw Brendan Rodgers’ side topple out of the Champions League qualifiers at the third hurdle as they crashed 2-1 to mediocre opponents.

The 28-year-old former Manchester City player came back for the home game against Hamilton Accies on August 26 and, remarkably, scored the only goal of the encounter.

Many were raging at Boyata’s stubborn stance last month and Lisbon Lion Bertie Auld was among those who insisted he should never play again for the team.

However, Rodgers replied he would always select his best players and Boyata returned in what is certain to be his last campaign at Parkhead with his contract due to expire in the summer. There is every likelihood he will walk away for nothing in June and could even agree a pre-contract in January. 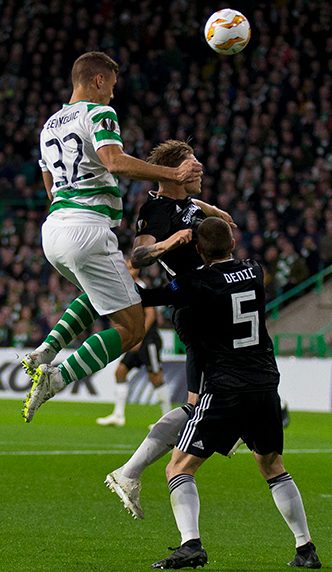 But, despite the fall-outs and protests, the classy back-four operator is still earning praise from his manager who was particularly pleased with his performance against tough Norwegian opponents in Thursday’s Europa League opener at Parkhead – and the part he played in the points-clinching winner from Leigh Griffiths.

Rodgers said: “You can see his (Boyata’s) commitment. It was a wonderful header back into the second six-yard box. Griff read it really well and finished it.

“I thought Filip Benkovic was good, too. He is just finding his way. When the ball comes into the box and you are under a bit of pressure from set-pieces and crosses, you’re looking at a centre-half who can really go and head it.

“I thought he was very good at that. His distribution of the ball was good.

“He will find more comfort the more he plays and once he understands how we play a bit more. For 21, he is very promising.”

With Kristoffer Ajer and Jozo Simunovic missing from the team against the Norwegians, it is likely Rodgers will again go with Boyata and Benkovic against Kilmarnock at Rugby Park tomorrow.