DEDRYCK BOYATA will know within the next 48 hours if he has kicked his last ball for Celtic.

The Belgian international limped off in the 75th minute during Sunday’s 2-1 triumph over Steven Gerrard’s men with a hamstring injury.

It was obvious the centre-back was in distress as he hobbled around the trackside and interim boss Neil Lennon has revealed the problem may be severe.

Boyata is expected to get scan results in the next couple of days that will determine if he can play on.

The World Cup stopper will quit the champions when his contract expires in June and the setback could mean it’s the end of the campaign and his Hoops career following his £1.2million move from Manchester City in June 2015.

With just seven weeks of the term to go, the 29-year-old back-four operator may be sidelined as the club go in search of the unprecedented treble treble.

The extent of the issue will be fully uncovered when the result of scans come through, but Lennon reckons it could signal the end of the classy defender’s season.

The Parkhead gaffer, speaking to the Daily Record, admitted: “He played on having felt a twinge and then he felt a rip five minutes later.

“Again, we’ll have to wait and see, but it’s a blow because he’s been absolutely brilliant.” 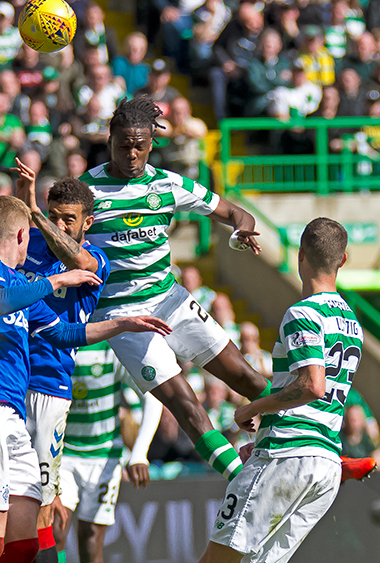 Fulham bid £9million for Boyata in the summer, but ex-boss Brendan Rodgers insisted the club reject the offer and the player remained at Parkhead.

A well-publicised fall-out saw the player miss the crucial Champions League qualifier against AEK Athens in the Greek capital in August which ended in a 2-1 defeat and a 3-2 elimation from Europe’s elite competition.

Boyata made his comeback against Hamilton Accies on August 26 and scored the only goal of the game.

Apart from injury and suspension, he has been a mainstay in the champions’ first team since then.

Kieran Tierney also hirpled out of the derby and could be struggling to face St Mirren in Paisley tomorrow night.

Olivier Ntcham made his first appearance of 2019 against the Govan outfit, but looked well off the pace as the game progressed. He was replaced by Tom Rogic, coming into the team for the first time since the 4-3 victory over Aberdeen at Pittodrie on Boxing Day, and he, too, showed he needs games.

Lennon added: ““We just have to keep going. We have St Mirren on Wednesday and a Scottish Cup semi-final coming up.

“St Mirren had a great win at the weekend and then we’ve got Livingston at home.

“We know what’s at stake to win the league. Three more wins will do it, so that’s the focus – to try and get it done as quickly as possible.

“It would be great if we could and we have to assess the squad as there are a few injuries and fresh injuries, as well.”