Celtic Quick News on News Now
You are at:Home»Latest News»BRENDAN RODGERS: ‘IT’S NOT THE PUNCHES TO THE HEAD OR THE BODY THAT STOP YOU, IT’S THE PATS ON THE BACK’
By CQN Magazine on 27th February 2019 Latest News

The manager who stunned the club’s supporters yesterday by walking out of Parkhead at a crucial stage of the season didn’t appear to have such drastic actions in mind when he reflected on the previous campaign.

Here is what the Irishman said in an extract from Alex Gordon’s publication ‘CELTIC: The History Bhoys: Extra-time’, which was printed last year.

BRENDAN RODGERS was in a philosophical mood as the applause for his deeds faded to a crescendo.

There is no chance of the Celtic manager allowing an inflated ego to carry him off towards dangerous territory. The man from the village of Carnlough, in County Antrim, Northern Ireland, is as grounded an individual as you will find.

There are no chest-thumping moments of bravado or wayward promises from a forty-five-year-old team boss whose focus remains rigidly on winning football games.

He admits there is no place for sentiment in the sport. He paid £1million to Bundesliga outfit RB Leipzig for centre-half Marvin Compper in January, but the one-time German international did not even get ninety minutes on the pitch for the seven-in-a-row champions. He made his debut in the 3-0 Scottish Cup win over Morton at the start of March, was taken off near the end and was never seen again for the remainder of the campaign.

A seven-figure transfer deal does not guarantee a place in a Brendan Rodgers line-up.

Similarly, he would not be enticed into affording Chelsea loanee Charly Musonda any more game-time than he thought was deserved. The eighteen-month temporary contract had a year shaved off it at the end of the season and the twenty-one-year-old Belgian playmaker returned to Stamford Bridge. 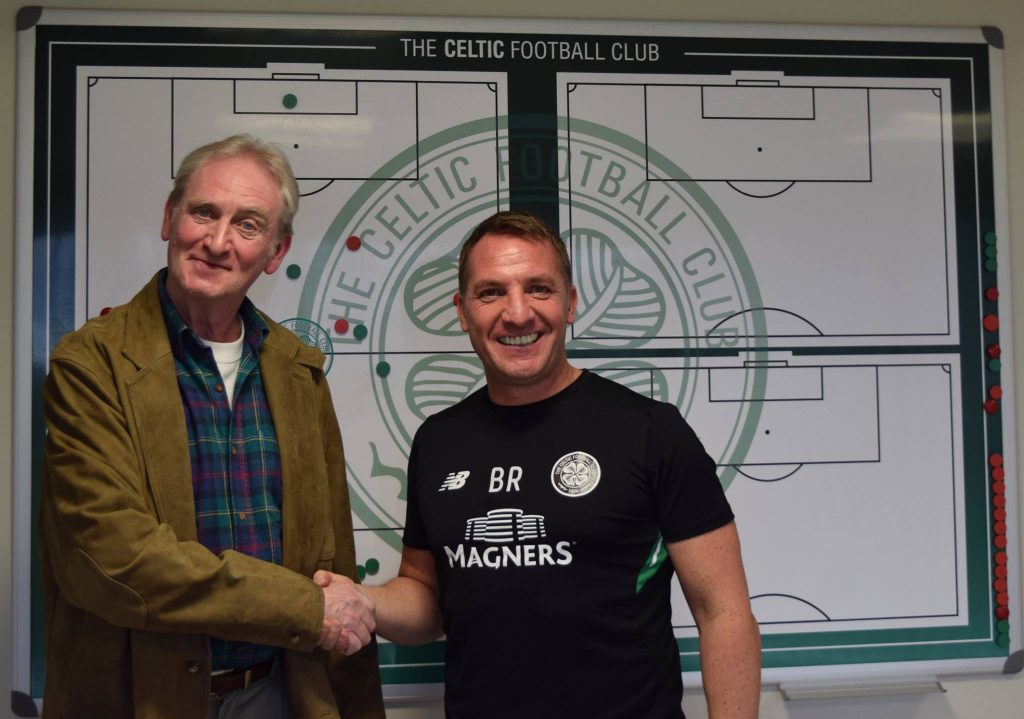 SHAKE ON IT…Brendan Rodgers with author Alex Gordon in the manager’s office at Lennoxtown.

With one minute to go in the Scottish Cup Final, Rodgers might have thought about giving Patrick Roberts the opportunity to say farewell to the fans after his two-and-a-half years as a Celtic player on loan from Manchester City.

Instead, Rodgers introduced Scott Sinclair for James Forrest to see out the fading moments at Hampden.

That’s the way he calls it, a man who can take a step back and remain detached from the sea of euphoria that can sometimes engulf all-too-willing participants whose desire for praise and adulation appears as important as oxygen.

Rodgers looks at the bigger picture and says: “For teams like ourselves, it’s not the punches to the head and body that stop you, it’s the pats on the back.”

He has been victorious where no Scottish manager has succeeded in the history of the Scottish game, winning six trophies in two years.

However, he has no interest in personal glory. He insists: “My satisfaction is for the club as a whole, the joy it will give people and during the off season and then it will all quickly be forgotten about and we’ll go again next year.

“When you come off the back of a really successful season like last year, it’s so easy to go soft and timid and not have quite the same aggression and that’s something I was really aware of.

“I don’t have players who don’t want to be better every day and that’s clearly important. We can never be satisfied. In the cycle or era that we’ll be here, for however long it is, we have to be hungry to succeed.

“Winning everything, that’s the idea. I certainly need to push them even harder next season. They won’t get the pats on the back. This is our job, we are here to win. I think we can be better.”

The Celtic fans can sense treble treble ahead.

* DON’T miss the unbeatable match report and action images for Hearts v Celtic this evening – only in your champion CQN.