Celtic Quick News on News Now
You are at:Home»Latest News»BRENDAN, THE FANS’ FAVOURITE, GETS WARM WELCOME FROM AFFILIATION
By CQN Magazine on 20th May 2016 Latest News

CELTIC supporters voted overwhelming on a Celtic Quick News poll on 10th May for Brendan Rodgers to be appointed as the club’s new manager.

CQN gave three options – Rodgers, David Moyes and the media’s favourite for the job Roy “the betting is suspended” Keane.

FROM THE THREE MOSTLY LIKELY CANDIDATES WHO WOULD YOU LIKE TO BE THE NEXT CELTIC MANAGER?

Meanwhile the Affiliation of Registered Celtic Supporters Clubs has this evening welcomed today’s appointment and issued a rallying call to supporters to renew their season tickets – or get one – and get behind the team as they strive for 6 in a Row, some Cup Final joy and a decent run in European football. 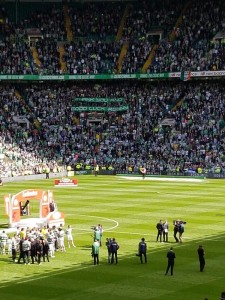 “The news tonight that, after days of rumours, we have appointed Brendan Rodgers as manager is a massive statement of intent from our football club.

“The Affiliation wish to praise the club on this appointment. It’s an appointment that is ambitious and is of a stature befitting of our football club.

“We now need to do what we do best. Get behind the club. Let’s make Paradise, Paradise again.

“Back the manager. Back the club.

Welcome Brendan. We wish you all the best.”