FORMER Celtic star Alan Thompson is tipping Brendan Rodgers to keep his 100 per cent Hampden record and win the Scottish Cup next month.

The ex-Hoops coach is a massive admirer of the Irishman and can’t see him failing at the last hurdle of the current campaign.

Thompson said: “To have someone of the calibre of Brendan Rodgers is brilliant for Celtic and the game in Scotland.

“He brings extra kudos and has raised the bar. I look at what’s happening and he has managed to bring incredible success to the club.

“They are on the verge of back-to-back trebles and the comprehensive victory against Rangers last weekend put down yet another marker.

“They now need to beat Motherwell in the Scottish Cup Final to write yet another special chapter in the history of the club.

“I think they will do it. That said, Motherwell will be difficult opponents as they have a few really good players such as Curtis Main and Chris Cadden.

“But Brendan has never lost a game at Hampden and I think he will keep that record going.”

Thompson, who is based in Newcastle, is also a fan of the competition north of the border.

The forty-four-year old, who parted company with League One side Bury earlier in the season, said: “I rate the Scottish game highly and there are some quality players, for sure. 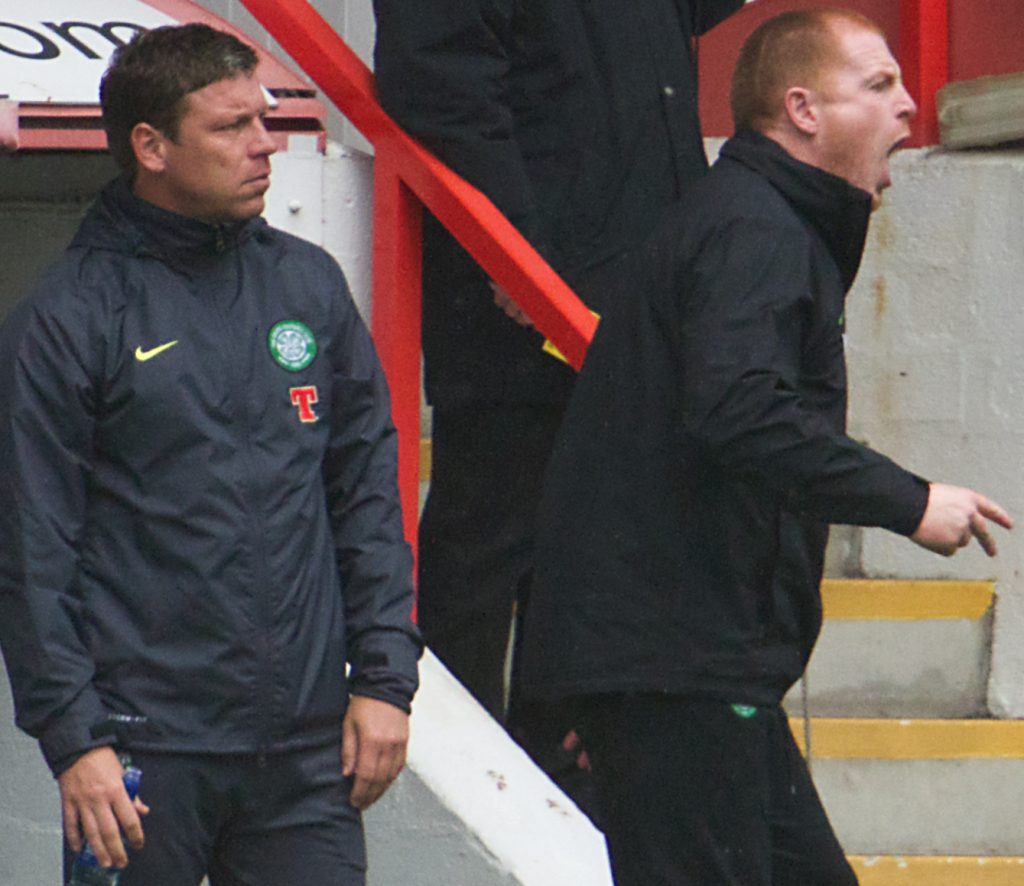 TWO OF A KIND…Alan Thompson and Neil Lennon during their Celtic days.

“I also think the standard of coaching and management is very high.

“There’s Brendan, of course, and then you look at the stamp Steve Clarke has put on Kilmarnock in just six months. It has been quite incredible. He has a wonderful CV and has only enhanced it from his time in Scotland.

“But that is the case all over, from the excellent job Neil Lennon is doing at Hibs to the consistency from Derek McInnes at Aberdeen over five years.

“Then there’s Steve Robinson, who has now taken Motherwell to two Cup Finals. So, it’s all positive.

“It’s an education to come to Scotland and study what these guys are doing, even if it’s just for 90 minutes on a Saturday.

“I think there is a good buzz in Scottish football, and that’s why I’m open to coming back.

“Of course, you need to wait for an opportunity. As a player, I was fortunate enough to work under guys such as Martin O’Neill and Bruce Rioch.

“Martin is an exceptional man – I have so much respect and admiration for him.”

Thompson, who has also had spells as No.2 at Birmingham City and Blackpool, was Lennon’s deputy at the Hoops when they won the Premiership title in 2012, the first of the current run to seven in a row.

The man who became the first Celtic player to win an England cap, against Sweden in 2004, added: “I was privileged to be part of the Celtic team that won the treble back in 2001.

“That was a wonderful period of my career and we went on to enjoy great Champions League nights and the UEFA Cup Final in Seville in 2003.”