Celtic Quick News on News Now
You are at:Home»Latest News»BRENDAN’S BEEN AND GONE, BROONY’S HERE TO STAY
By CQN Magazine on 1st March 2019 Latest News

IN the space of 10 remarkable days, Scott Brown has scored a last-minute winner, set up a stoppage-time points-clincher, helped Celtic remain on course for their eighth successive Premiership crown, maintained the path towards the historic treble treble, been sent off, picked up three yellow cards, served a one-match suspension…and played under two different managers.

Even for the Hoops’ 33-year-old skipper, who has been there, seen it, done it etc and has the scars to prove it, that is an unprecedented whirlwind of events.

The action man onfield leader kicked off a sensational string of events against Kilmarnock on February 17 when the game at Rugby Park was ticking down to a scoreless stalemate.

Brown, who had netted his first goal in two years in the 5-0 Scottish Cup triumph over St Johnstone at Parkhead the previous week, astonishingly made it two in two games when he grabbed the last-gasp winner against Steve Clarke’s outfit to keep the champions eight points ahead at the top of the table.

Unfortunately, referee Bobby Madden flashed a second yellow card at the former Scotland international captain and that meant an automatic one-match suspension for the following encounter, the 4-1 win over Motherwell in Glasgow last Saturday. 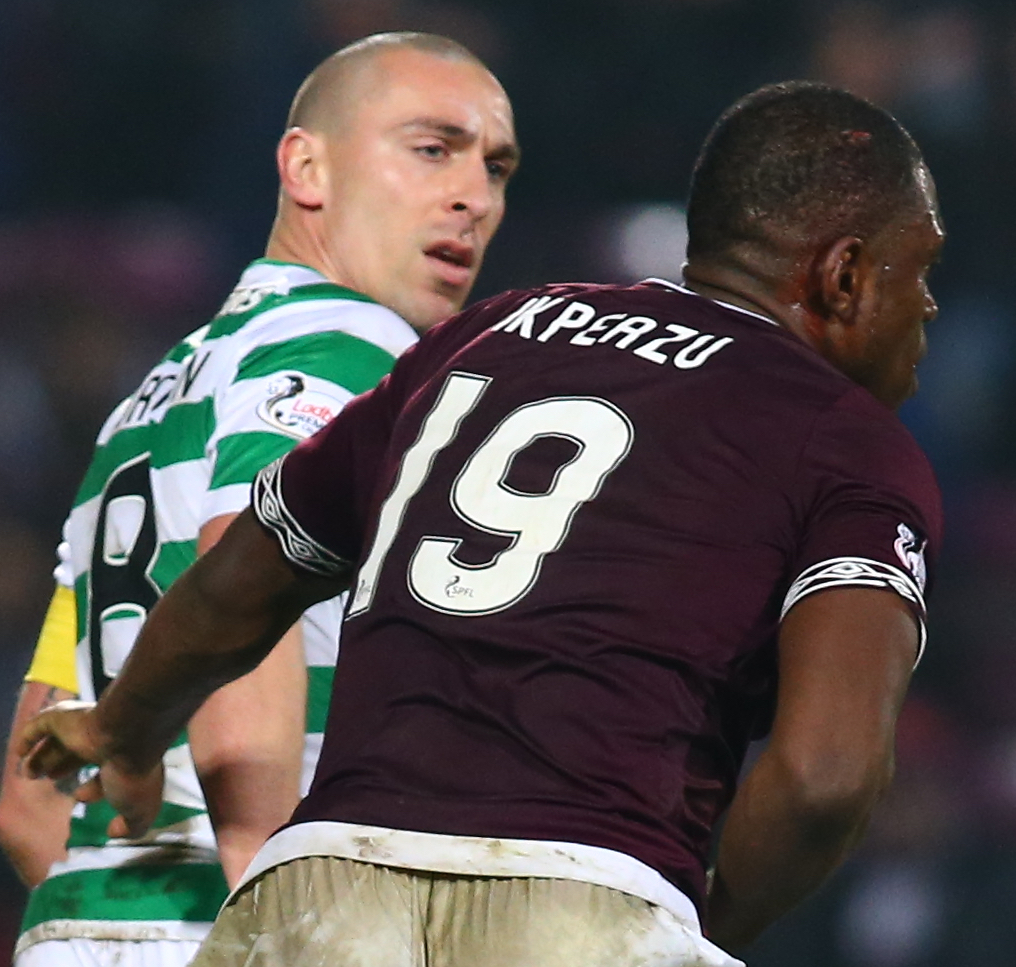 Forty-eight hours later, in truly incredible circumstances, Brendan Rodgers had departed the Parkhead dug-out after only 33 months and seven trophies to take over Premier League mid-table side Leicester City.

On the same day, Neil Lennon returned to Celtic as interim manager and 24 hours afterwards he was in the Tynecastle dug-out as the title kings faced a dangerous trip to Edinburgh and a meeting with Hearts at a venue where they had shed three points under the guidance of Rodgers earlier in the season.

One of the comeback gaffer’s easiest decisions was to restore Brown to the middle of the park with his suspension lifted and, once again, the player delivered.

Brown was in the thick of it for the entire confrontation, directing and cajoling from his midfield berth, and he also picked up a booking for a strong challenge on Peter Haring who had been letting the Celtic players he was on the pitch and had also earned a yellow card for a foul on Kristoffer Ajer and might have seen red for a collision with keeper Scott Bain.

Two minutes into stoppage time, with the encounter all getting a bit frantic and frayed at the edges, the Hoops inspiration kept his cool before deftly lofting a pss into into the Hearts penalty area.

The ball sailed over the heads of Oliver Burke and John Souttar and landed perfectly for Odsonne Edouard to volley beyond the stranded Bobby Zlamal.

Game over and three points in the bag. Two late interventions by Brown and the possibility of only two points had been transformed into six in the charge for eight crowns in a row.

Brendan has been and gone, but Broony is here to stay.

Now it’s Hibs on the radar in the Scottish Cup quarter-final tomorrow at Easter Road as the player continues his amazing Celtic adventure.

And the Hoops fans can rest assured, Scott Brown will not let them down.

CQN’s team of ace lensmen have been on the scene in Ayrshire and Edinburgh to capture the drama over the last 10 astounding days in the life of a man whose credentials will never be doubted. 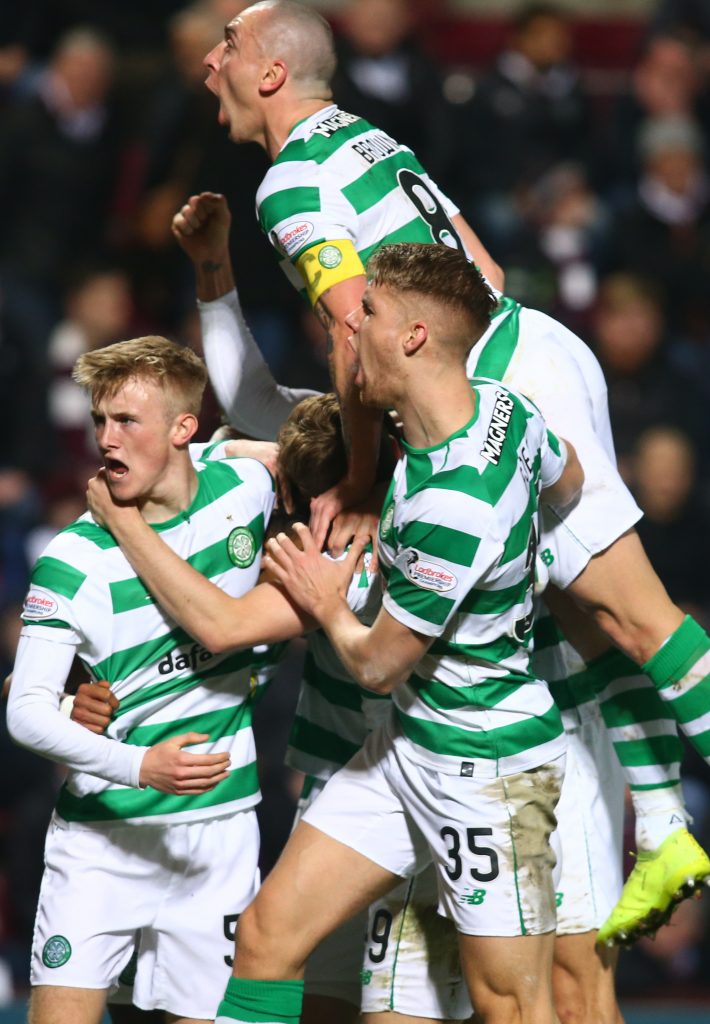 ON TOP…Scott Brown launches himself into the celbrations after James Forrest’s opening strike against Hearts at Tynecastle in midweek. Ewan Henderson and Kieran Tierney join in. 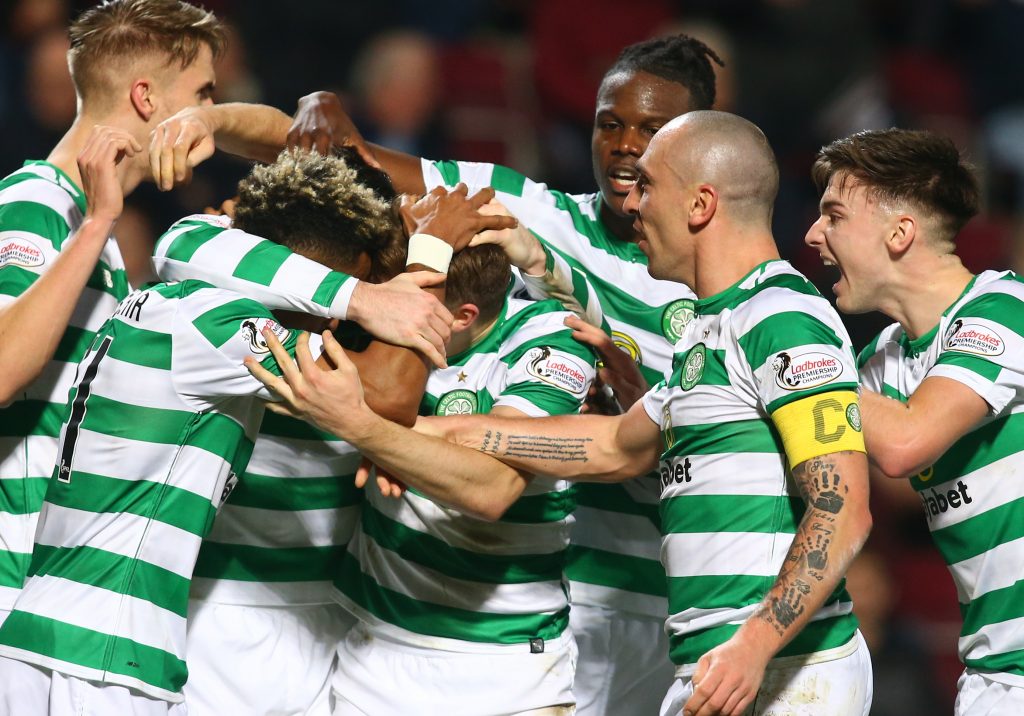 THE GLEE CLUB…Forrest is mobbed by his delighted team-mates. 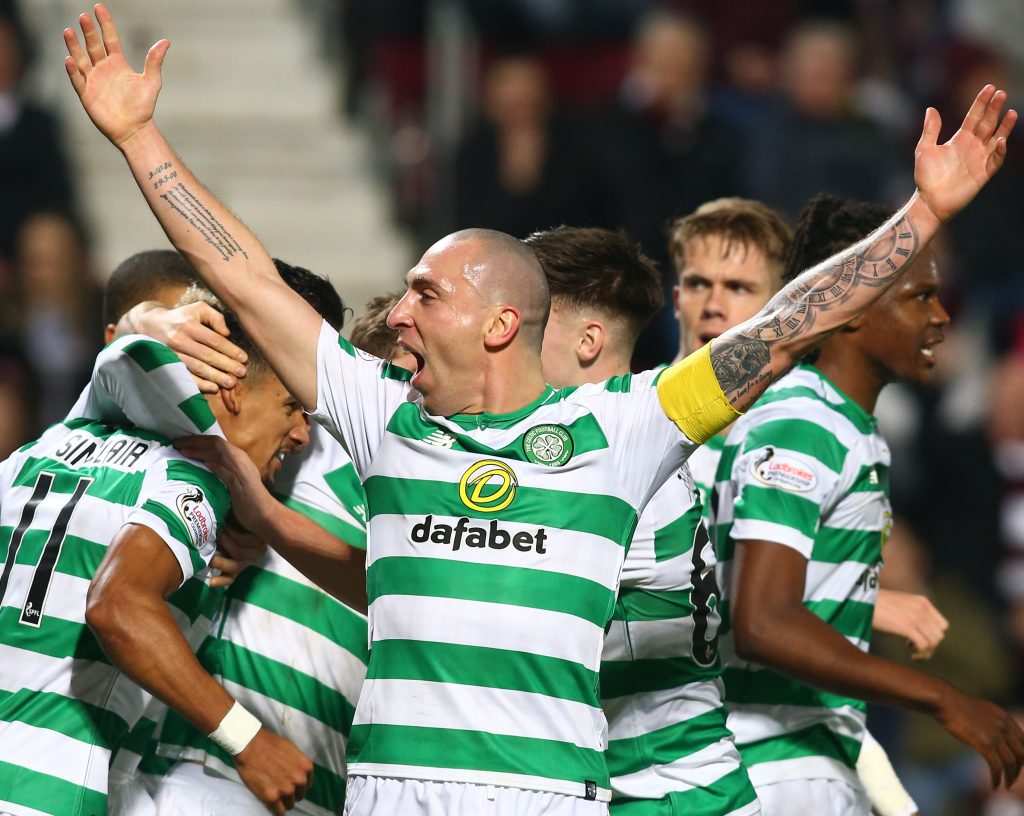 HOW ABOUT THAT? Scott Brown takes the acclaim as the celebrations go on. 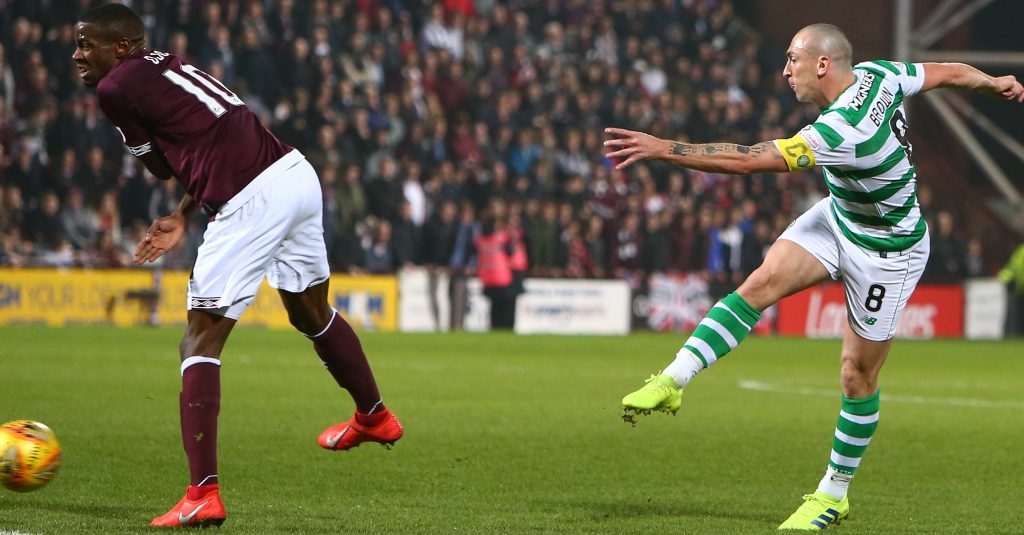 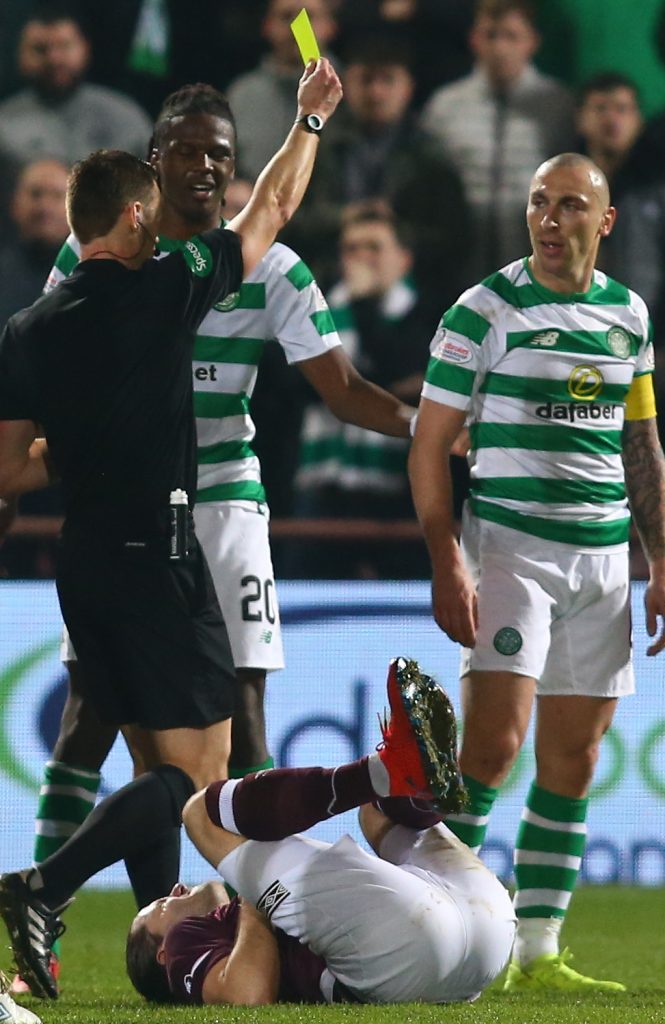 YELLOW PERIL…Scott Brown is booked by referee Steven McLean after a robust challenge on the grounded Peter Haring. 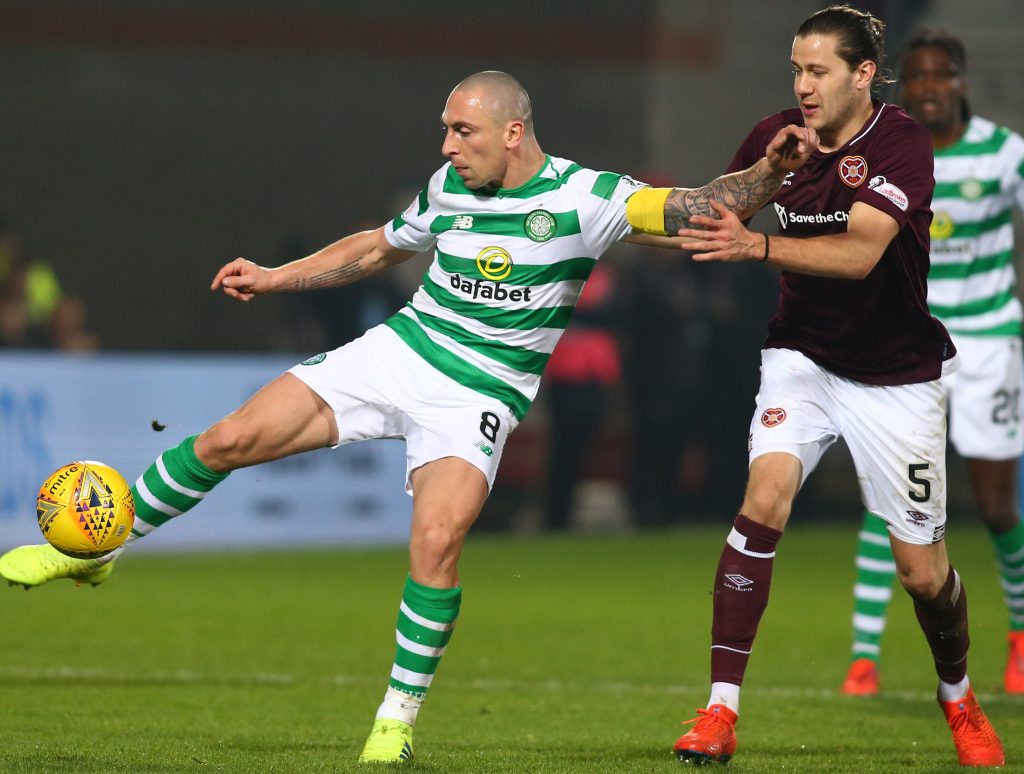 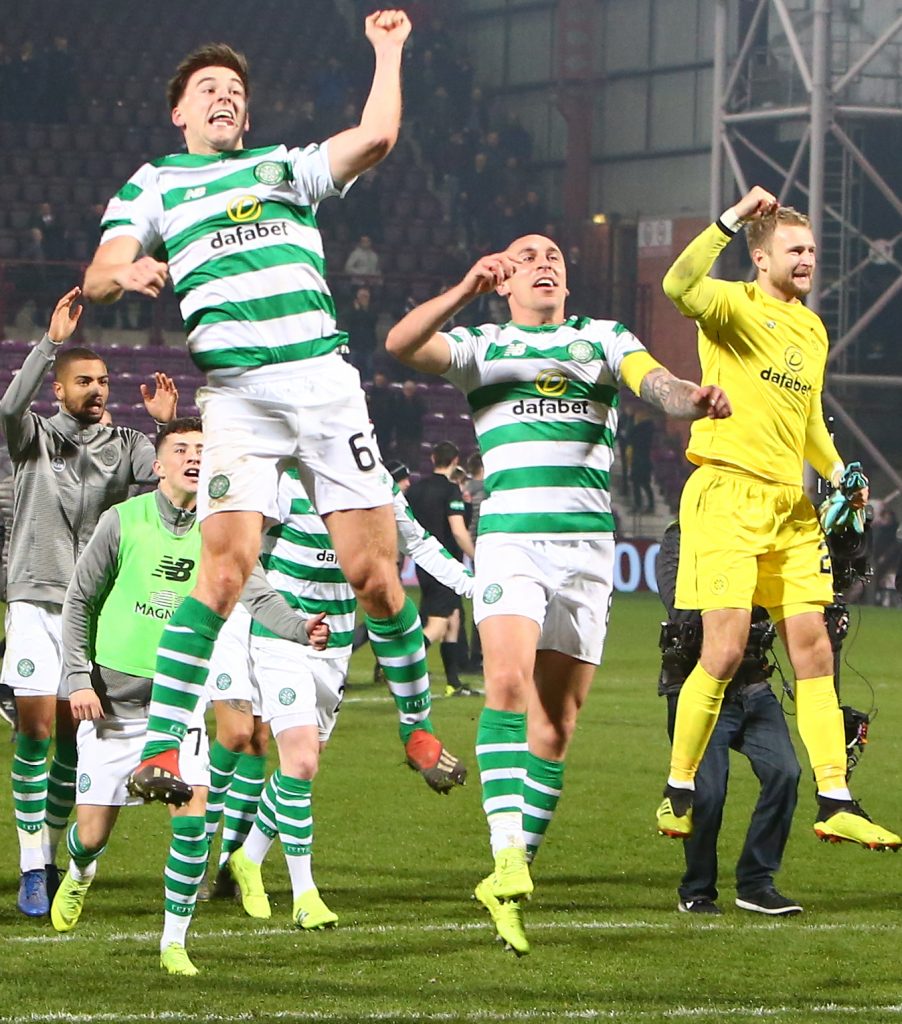 HIGH JINKS…Scott Brown takes to the air in celebration along with Kieran Tierney and Scott Bain. 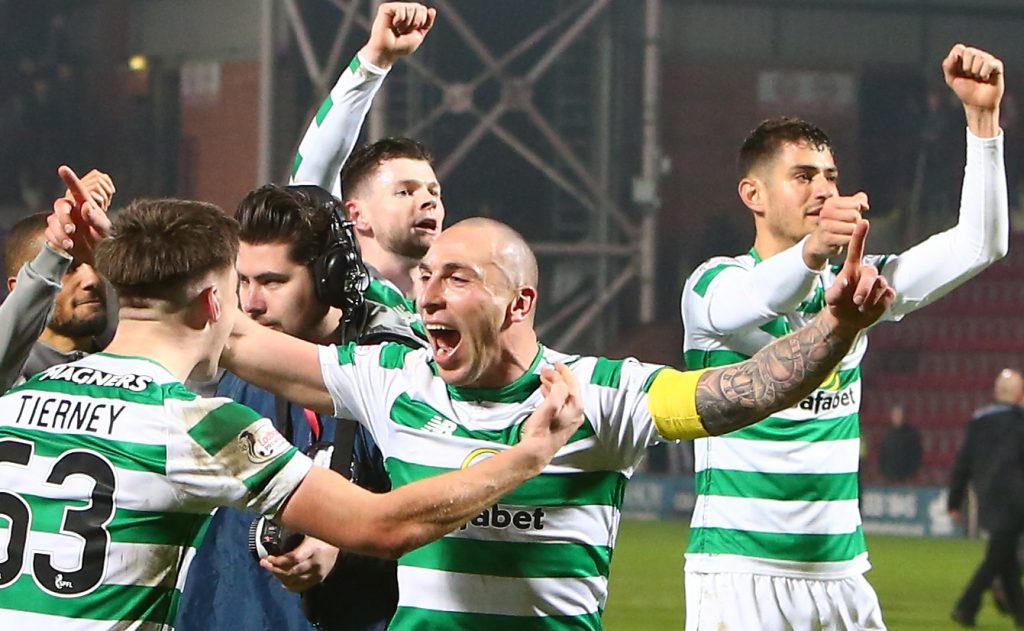 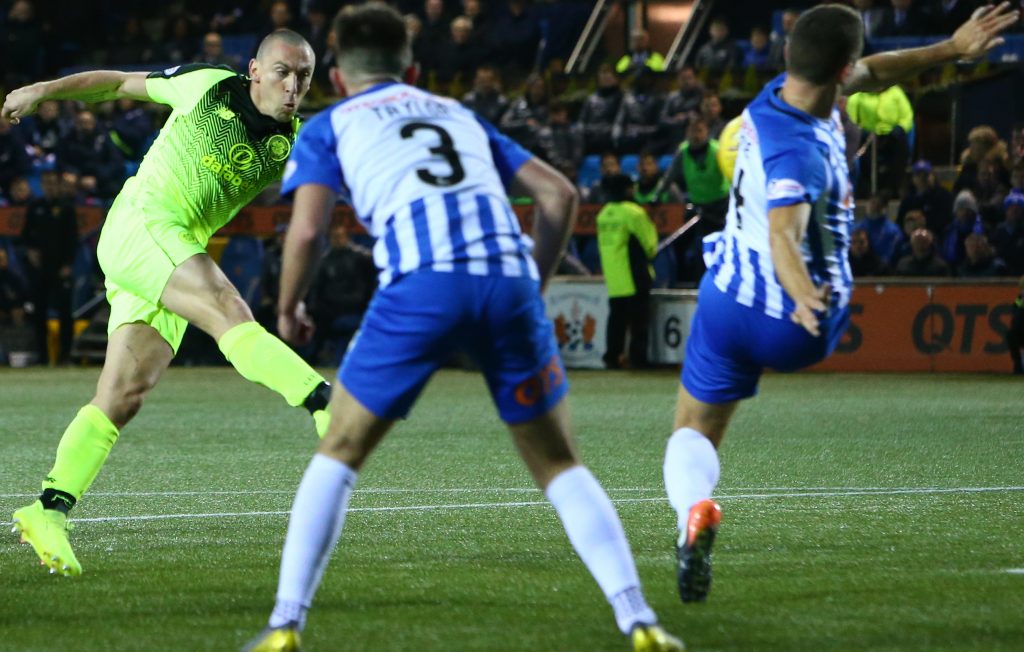 WHAM…Scott Brown lashes a right-foot drive towards the Kilmarnock goal with Alex Bruce trying to block the shot. 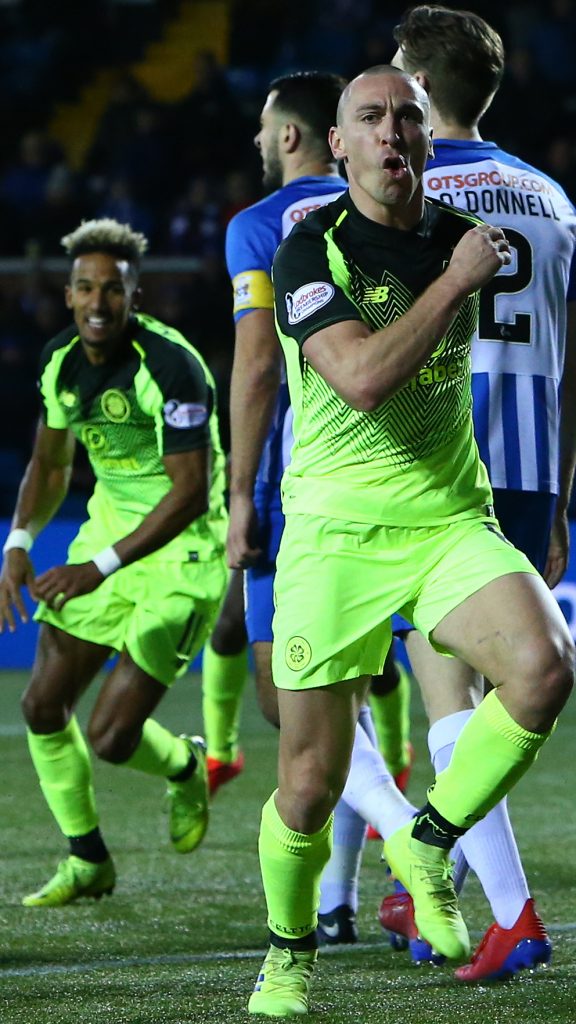 BETTER LATE THAN NEVER…Scott Brown races away in triumph as the ball finds the net. Scott Sinclair is about to congratulate his skipper. 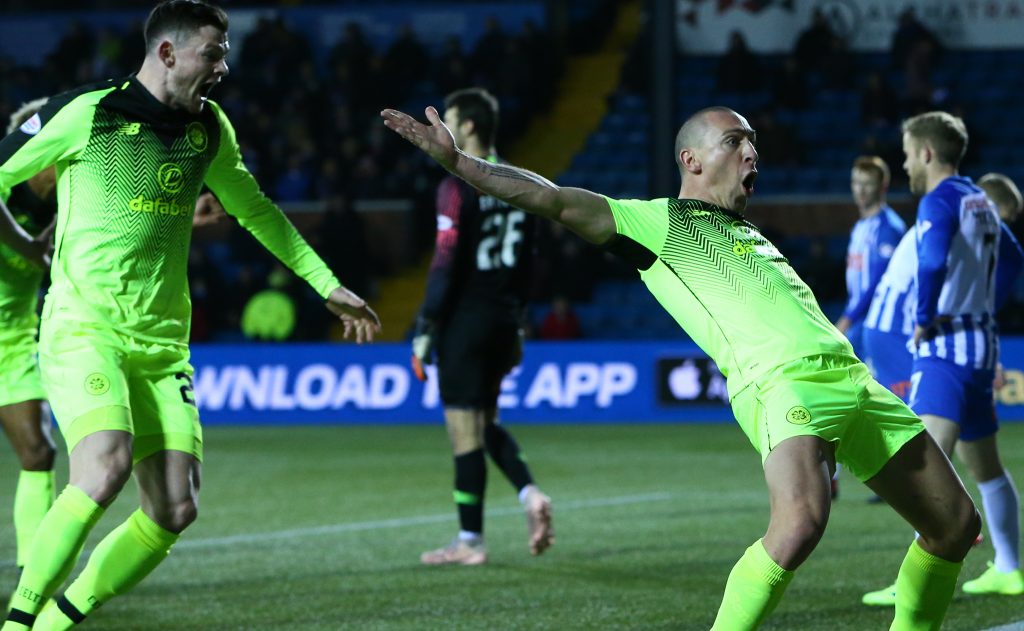 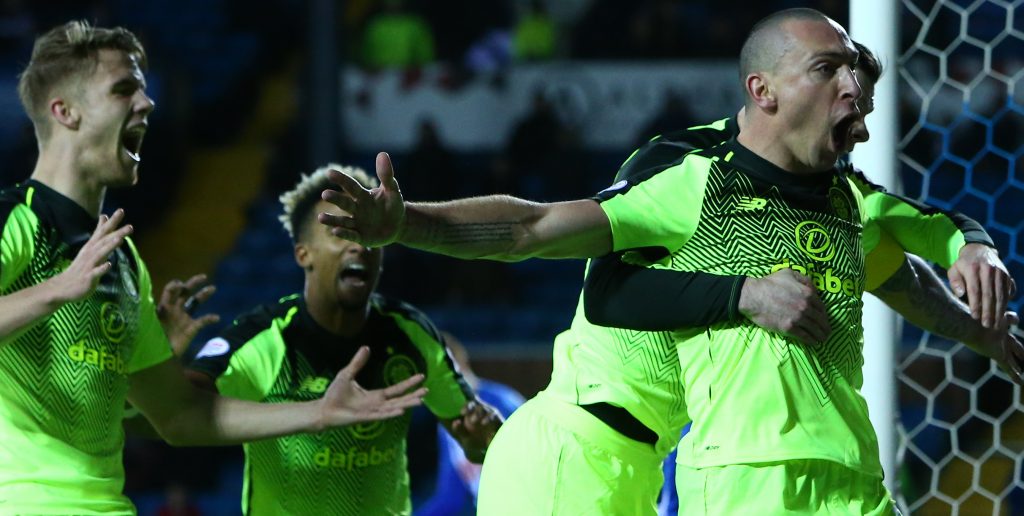 CHEERS…Scott Brown is grabbed by Oliver Burke with Kristoffer Ajer and Scott Sinclair about to join the parade.

HEAVENS ABOVE…Scott Brown takes to the skies as the Hoops head for three points in their quest for their eighth successive crown.