Celtic Quick News on News Now
You are at:Home»Latest News»BRENDAN’S No.1 THEORIES GET THE BOOT
By CQN Magazine on 30th July 2019 Latest News

The current gaffer’s predecessor insisted on his last line of defence playing the ball short to players in front of him to keep possession and build from the back.

Rodgers would not be swayed from his belief and ruthlessly axed Craig Gordon to introduce Dorus De Vries in the opening months of his two-and-a-half-year reign in charge after working with the Dutch veteran at Swansea. However, the former Dunfermline No.1 did not convince and after conceding seven in a Champions League collapse against Barcelona at the Nou Camp in September, the Scotland international was soon recalled.

Gordon was again pushed to the side at the turn of the year when Scott Bain was brought in for the 3-0 Scottish Cup win over Airdrie in January and the ex-Dundee shotstopper, more adept with the ball at his feet than his glove rival, kept the No.1 position for the the remainder of the unprecedented treble treble campaign.

However, Lennon does not subscribe to the theory his goalie should be blessed with the defensive ball-playing skills of a Franz Beckenbauer – or even a Virgil Van Dijk –  and has informed his international double-act of his priority – to prevent the opposition from scoring.

The Irishman, speaking to the Evening Times, said: “It’s far less a factor for me. I like my goalkeepers to keep the ball out of the net. I’ve got two who are very, very good at that.

“Craig has really impressed me in training and in the bounce games we’ve played and Scott has been brilliant for me. Since I came in, he’s been absolutely outstanding.

“They are quality players, we’re talking about Craig Gordon here, Scotland’s number one for a long, long time. So, it’s not as if we are taking the tie lightly, we’re just giving some good players who haven’t had the opportunity to play a chance to play.”

Gordon was back-up to Bain in last season’s second half, but isn’t necessarily seen as second choice for this campaign.

Lennon added: “I wouldn’t say that, it’s too early for me to make that assessment. 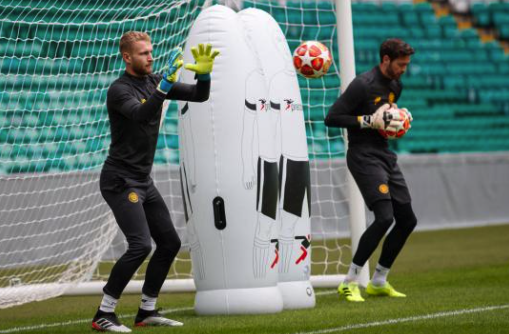 “He didn’t play when I came in due to a knee problem, but he’s over that now and he’s training well, so we’ll see how we go with the two of them.

“It’s something that we’ll gauge as we go along. I’m not going to treat Scott Bain badly. If he’s performing well, as he has done, then it’s not a difficult thing to keep the momentum going that way.

“Probably gut instinct as we go along, and Stevie Woods will be important in that, as well.

“I don’t want to put any extra pressure on either one of them.

“I’ve got the luxury of having two very good goalkeepers at the minute and, if called upon, I’m sure either of them will come in and do a terrific job for me.”

Gordon will start the Euro tie in Tallin and Lennon will have a decision to make for the opening Premiership encounter against St Johnstone at Parkhead on Saturday.

The 36-year-old former £9million Sunderland keeper has not played in the league since the 1-0 loss at Ibrox in December.

To most onlookers that afternoon, Gordon was Man of the Match with several top-class saves during a particularly poor performance from his colleagues, but Rodgers did not agree and gave him the boot.

Change days now for the popular Celt as he and Bain prepare to battle for the gloves.