DEFIANT keeper Liam Kelly admitted the Celtic players who did NOT start in the 4-0 weekend mauling at Fir Park was enough to terrify Motherwell.

The Scotland international squad netminder, who kicked off his career at Ibrox, made a string of excellent saves – including one from Liel Abada after just over a minute – to keep the score down.

Kelly was eventually beaten by the prolific Israeli winger just before the half-hour mark and Tom Rogic clipped in two classic efforts before Daizen Maeda added a fourth in the second-half.

However, it was the strength in depth of the Hoops substitute bench that left the shotstopper in awe when Ange Postecoglou had the luxury of bringing on Nir Bitton, James Forrest, Filipe Jota, Matt O’Riley and Josip Juranovic after the break as he prepared for tomorrow night’s crunch confrontation with Aberdeen at Pittodrie. 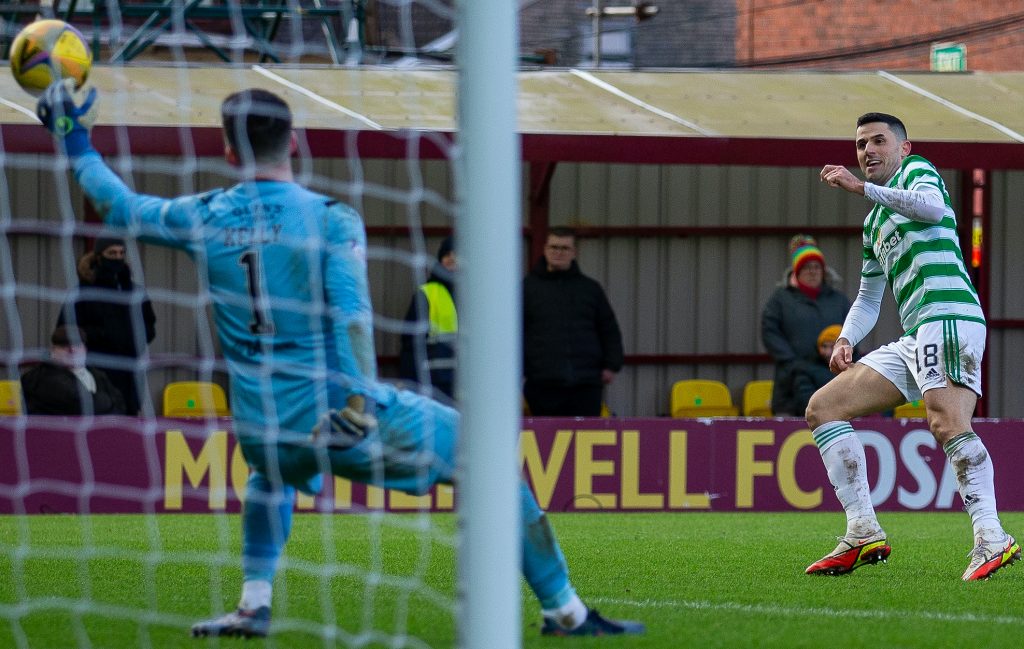 HELPLESS…Liam Kelly is beaten by Tom Rogic, but on this occasion the woodwork comes to his rescue.

The visitors were unstoppable as they took another step towards their tenth title in 11 years and Kelly said: “Celtic are capable of doing that to most teams. But you like to be in the game.

“You want to give a better account of yourself, but, realistically, the game was done at half-time.

“You have to try and stay in it for as long as you can. We tried to have a go, but they punished us. They were too good for the press we tried to put on. We got caught in between most things.

“They have top players and they made us pay.

“It’s not ideal when the players they have on the bench come on. You feel like going off yourself!”

Kelly, speaking to the Daily Record, added: “They are a brilliant team with a lot of quality. You see the subs they bring on and they’ve still got some top players who are still injured and weren’t involved.

“It was a good day for them and a poor day for us. We were up against a really good side who were probably a bit much for us.

“In the first-half, we tried to give it a go and they picked us apart.

“I think Celtic were well-deserved winners. We just need to take our medicine.”

Ange Postecoglou’s men remain a point ahead at the Premiership summit as they prepare to take on Scott Brown and Co tomorrow night at the same time Giovanni van Bronckhorst’s team, thrashed 3-0 at Parkhead last week, face Hibs in Glasgow.