Celtic Quick News on News Now
You are at:Home»Football Matters»BRING BACK COMMONS,’ PEARSON
By CQN Magazine on 15th April 2016 Football Matters
FORMER Celtic star Stephen Pearson has begged Ronny Deila to bring back Kris Commons for Sunday’s Scottish Cup semi-final.
The 32-year-old midfielder has not featured in the Hoops’ last three games as Gary Mackay-Steven and Colin Kazim-Richards have been given the nod in his place.
Pearson, who played alongside Commons at Derby, believes his ex-colleague is a must to start and thinks the playmaker proved his pedigree again last season when he hit a 20-yard screamer for the second goal in the League Cup semi-final win over the Ibrox side. 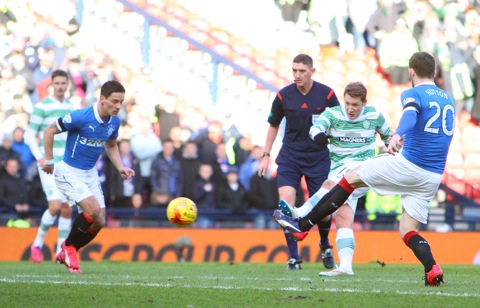 The Motherwell ace said: “Kris is a big-game player and, to be honest, I’m very surprised that he has not been playing. I don’t know if there’s been something more there, but from speaking to Kris he’s hopeful that he can play.

“He has the quality to score out of nothing and in these big games it can often take that moment of brilliance to win. He’s the type of player who can produce that bit of quality, so I’m sure most Celtic supporters would hope that he is in the team.

“But they have Leigh Griffiths up front who has been banging in the goals, so they’ll be looking to him to be their main man again.

”I know Kris Commons well, I played at Derby with him. I was chatting to him after our game at the weekend. He’ll be looking forward to Hampden.

“He was disappointed not to be in the side last week, but he’s hopeful that he’ll get the nod for the big game come Sunday.”

Pearson added: “I’ll have my Celtic hat on this weekend because if Celtic win the Scottish Cup it leaves it wide open for anyone body else who finishes fourth that there’s an opportunity to play in Europe.

“I have already said to Kris that we need a favour. Obviously for Celtic, it’s all about the bragging rights and reaching the Cup Final, but they can help us, too.”