SCOTT BROWN has praised Brendan Rodgers and insisted Celtic would not be on the brink of an unprecedented treble treble without his guidance.

The Hoops skipper hailed the former manager three months after his sudden departure for Leicester City at a crucial stage of what could be a historic campaign.

Rodgers was back in Glasgow yesterday for the funeral of Hoops legend Billy McNeill and was also at Parkhead afterwards with ex-bosses Davie Hay, Martin O’Neill, Gordon Strachan and Kenny Dalglish, who, of course, had a short stint in charge following the sacking of John Barnes in February 2000.

The sharp exit of the Iirishman for the Midlands outfit left a sour taste with many followers of the champions, but Brown has leapt to the defence of his old gaffer.

The 33-year-old midfielder, speaking to the Sun, said: “For me, Brendan’s reputation is unbelievable.

“He came in for two-and-a-half years and I felt lucky to have a manager of his quality who left Liverpool after coming to within two games of winning an English title for the first time in so many years.

“So, for him to come to Celtic was just fantastic. And the only reason we really got him at Celtic was because he was a diehard Celtic fan.

“He has gone back down the road now and we should just wish him all the best and go from there. We wouldn’t have had the double treble without him.

“We wouldn’t have the opportunity to be eight points clear when he left, with the chance of another Scottish Cup, as well. For me, he was a genius when he came in.” 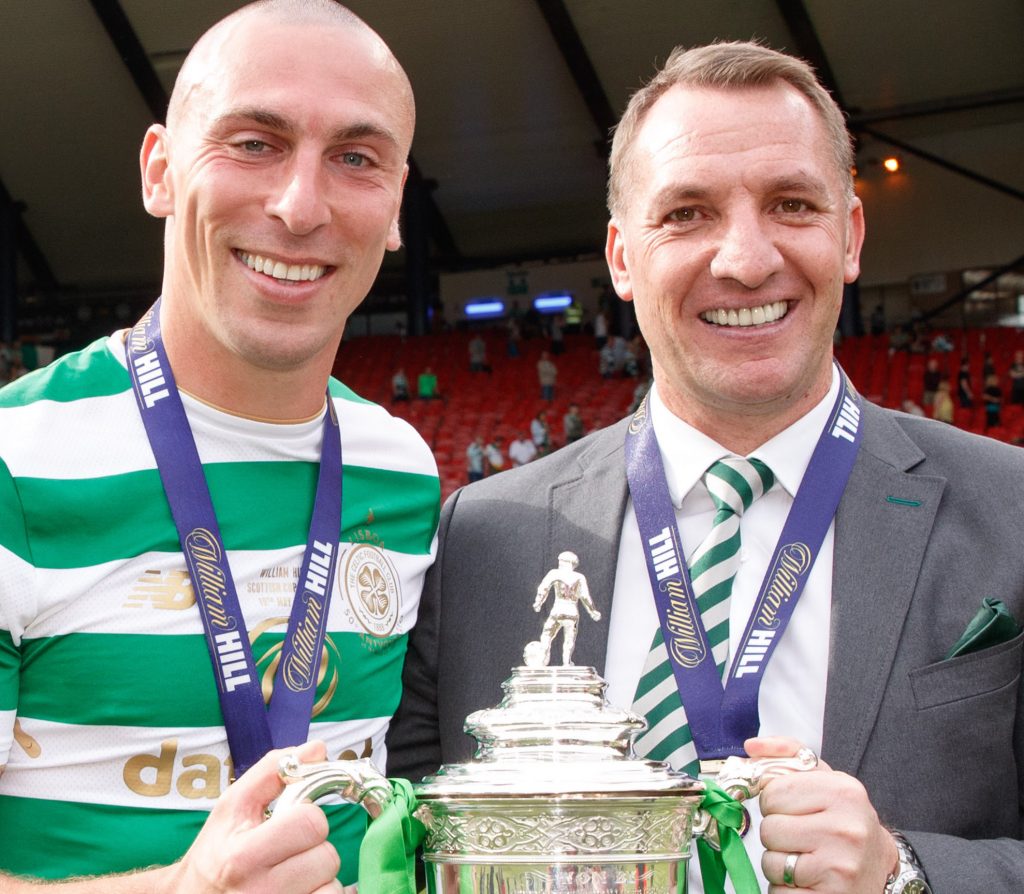 TWO OF A KIND…Scott Brown and Brendan Rodgers with the Scottish Cup after last season’s 2-0 triumph over Motherwell.

“He loves the club inside and out and a lot of the lads are still speaking to him. He takes time to speak to us still.

“A manager that didn’t support the club, or especially like the club, could easily have left, deleted his contacts here and changed his number and started a new career at Leicester.

“It just shows you the man that he is that he still keeps in contact.

“He was definitely genuine enough in what he said about Celtic, especially with me and all the other lads.

“You don’t keep in touch with players and text them all the time to make sure everything is going all right if you don’t care about the club.

“Everyone will be disappointed when a manager like that leaves. But, yet again, we have another great manager who’s come back in.

“He came and started this great run off. It’s seven in a row so far, so here’s hoping we can get another one on the tally at Aberdeen.”

He added: “Brendan was Brendan. He was very good at what he did.

“Neil is very good at what he does, as well, and he has just tried to keep everything running along the same lines as Brendan.

“It’s been a tough run and it’s been tough for the gaffer coming in after Brendan. He has dive-bombed into the deep end with two feet and he enjoys it, as well.

“He has been a great man for the job so far. He just wants us to get over the line, whether we win at Aberdeen or wherever.

“We just want to get over the line as quickly as possible and do it for him, too.”