The 33-year-old skipper celebrated the personal landmark by playing his role in the 3-0 victory over Motherwell at Parkhead in midweek.

McGregor, in his more accustomed advanced role in the line-up, was also in action as the Hoops picked up three points to move back to the Premiership pinnacle.

And the 25-year-old Scotland international, who made his 200th appearance against Hibs at Easter Road on Sunday, is aiming to at least emulate the captain after agreeing a contract extension that will see him remain at the champions until 2023.

Remarkably, McGregor has participated in some part in 71 of the Hoops’ last 72 matches, missing out only on the club’s 1-0 loss to Kilmarnock at Rugby Park in February where Youssouf Mulumbu, now a team-mate, scored the only goal.

The former Celtic ball-boy reflected on his 41 outings for club and country so far in this campaign and said: “It’s a lot of games and there have been periods when I’ve maybe needed to play one or two extra because of injuries elsewhere that mean you can’t come out.

“As a player, you want to play as many games as you can. And 41 games show you are a big part of the team. That’s what you want to be as a footballer, helping the team as much as you can.

“I feel as fit as I have ever been. It’s been great. I have enjoyed it. When you’re playing well, you don’t want to come out – you just want to keep going. We have three big games to go and then we get a wee break in January. 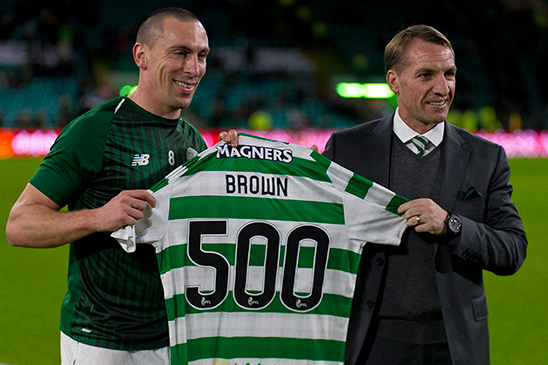 500 NOT OUT…Scott Brown and Brendan Rodgers before the landmark appearance against Motherwell in midweek.

“You see Broony getting to 500 games and you don’t do that for a club like this unless you have the right mentality, hunger and talent.

“He has shown all of that and it’s something for me to aspire to. It’s certainly something I am looking at.”

McGregor added: “We have three big games coming up and we might be a bit short on numbers, but the sign of a good team is showing character in those periods of adversity.

“You always bounce back. We had a poor result at the weekend, but bounced back from it on Wednesday night to go top of the league. It’s about the character of the boys, the squad and the manager.

“It has been a strength of the group to respond when there have been tough times over the past couple of years. The boys have stuck together and come through the other end. We know how big a period this is for the club and we want to get positive results to take us into the New Year.

“It’s about us just trying to stay mentally strong. If we show that mental fitness over the next three games, we could be in a really good place come January.

“It’s important that we put our foot to the floor in the next 10 days and get through them.”