SCOTT BROWN is on Aberdeen’s radar as they prepare for a management shake-up following this week’s departure of Derek McInnes.

The Celtic skipper, who has been at Parkhead for 14 years, WILL be sounded out by his former Hibs team-mate Stephen Glass – IF he gets the Pittodrie post.

The ex-Dons midfielder is currently a coach at Atlanta United 2, but is a frontrunner for the job following McInnes’ exit after eight year in the north-east position.

Brown, who will be 36 in June and is coming out of contract, insisted he “was too young” to think about a coaching role, as CQN reported last month.

Glass, 44, hopes the former Scotland international midfielder will consider a switch from Glasgow which, of course, is dependent on him getting the nod to take over. He also has eyes England strikers’ coach Allan Russell as part of his backroom team. 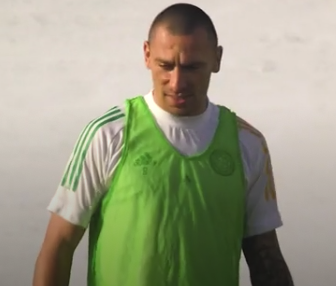 Gordon Strachan paid a Scottish club record fee of £4.4million to bring Brown to Celtic where he has won a spectacular 22 honours, the most recent coming in the delayed Scottish Cup Final penalty-kick shoot-out triumph over Hearts at hampden five days before Christmas.

A deal to bring Glass back to the Dons has yet to be finalised, but it’s understood he is the club’s preferred candidate, as reported in the Scottish Sun.

The prospective gaffer is a friend of Brown since their time together at Easter Road and sees him as an ideal No.2 as he prepares for his first foray into top management.

Dons chairman Dave Cormack and Atlanta supremo Darren Eales, who also sits on the Dons board, hope to make the final decision on their new manager this month.

Paul Sheerin and ex-Celt Barry Robson have been put in temporary charge since McInnes’ abrupt leaving.