Been in conference in deepest Manchester for a few days, has anything happened? First of all, well done to the captain for the whole onesie thing. I remember the days Celtic View staff had to campaign for days to get a word from a Celtic player. Notions that the senior players would roll their sleeves up and get involved with media, commercial or Foundation projects were fanciful.

While the move to Lennoxtown has no doubt been good for players and coaches, fans seldom get to see players in less formal roles, like this, or the now frequent Celtic shop visits. 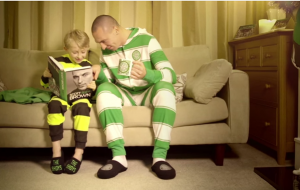 If you’ve not seen the video, check it out here.  It’s a Joy of Celtic kind of thing (which I know you have in spades).

Audit Scotland yesterday announced that there were no fraudulent activities surrounding the purchase of Lennoxtown by Celtic. Imagine that!  Celtic paid full price, including tax…

CQN and others spend years predicting the fate of Rangers and Murray International Holdings. The evidence was there, if a little hidden. Just because one group of fans can successfully uncover significant information on another club, doesn’t mean that any or every club is managed in an illicit manner.

The tip is: if you’re going to put a lot of time and effort into something, chose your subject carefully. Otherwise you not only waste your time, but you miss a whole lot of more serious action.

….what you need to do before you are considered appropriate to mount a Judicial Review of a process. Mike Ashley did this yesterday, despite his 9% shareholding in Newco. Fan groups wishing to pursue the SPFL, should they fail to look at the goings-on at oldco in the light of various recent legal matters, will need to convince a judge they are entitled to ask for a Review.

There is a clear route for pursue, should it be necessary.

On Ashley’s Judicial Review of the SFA’s decision to fine him £1000. If the Association are wise they’ll capitulate now. He knows what they don’t, he started this action knowing he has enough to win.

So what would you prefer, Newco fan money goes into Newco, or is held for a more productive moment? I reckon they should pile in now.