The midfielder has yet to agree a contract extension with the Parkhead men and has been linked with a lucrative three-year deal at A-League new boys Western Melbourne.

The Aussie outfit are eager to make the 33-year-old former Scotland international captain their marquee signing after winning a franchise spot to play in next season’s top flight.

Brown has been granted permission to hold off making a final decision, but his future could be settled as early as next week.

The player, signed by ex-boss Gordon Strachan in a £4.4million switch from Hibs 11 years ago, has started only one game – last week’s 1-1 draw at Motherwell – since he sustained a hamstring injury in the 4-2 win over Neil Lennon’s Easter Road side at Parkhead on October 20.

Asked if there may be a resolution to Brown’s future in the next few days, Rodgers answered: “There may well be.

“I was not sure of when it was going to be resolved, but I have said before Scott will be afforded time in terms of making a decision about what he wants to do going forward. And he deserves that time.

“So, of course, we very much want him to be here, but, at this period of his life and career, he has to be able to assess his options he has.

“He will be 34 at the end of this season and for some players, they reach that stage in life and they can pick up a two or three-year deal at that on big money and have an adventure for your family. 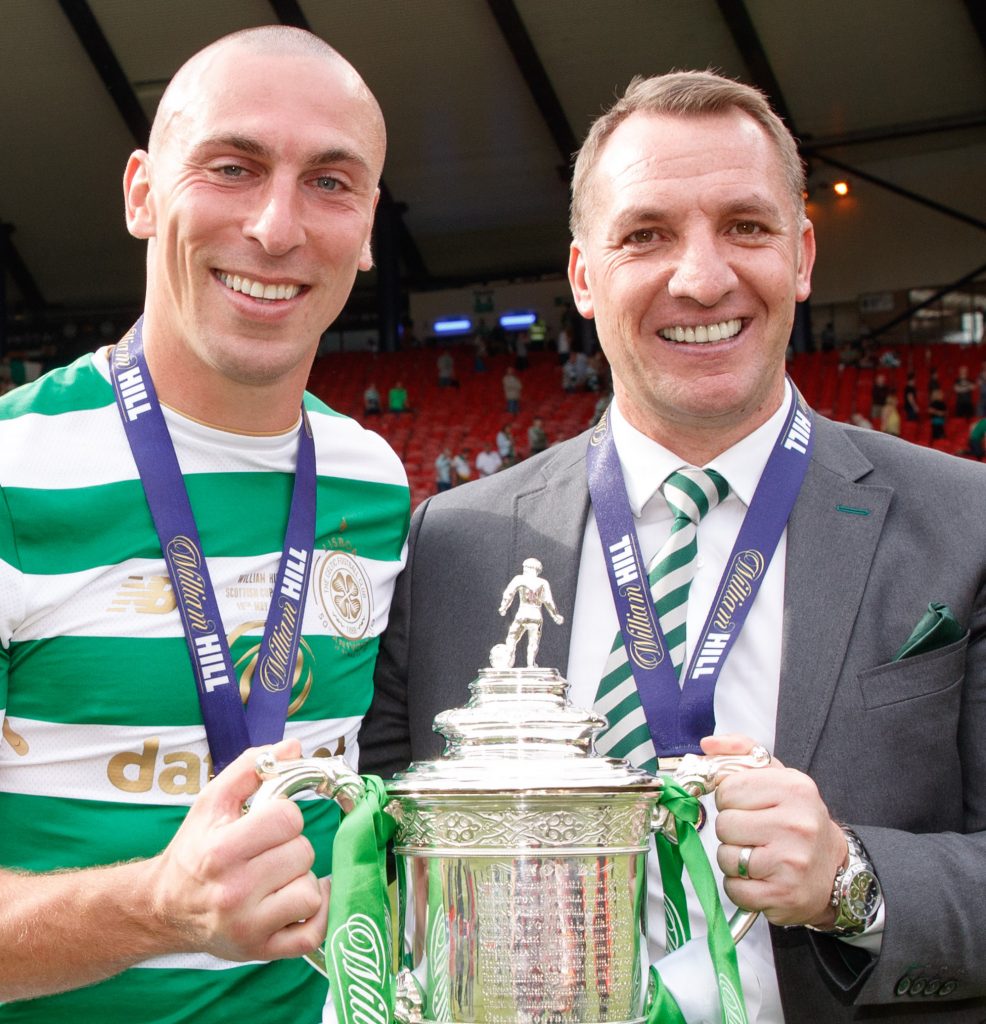 CHEERS – AND CHEERIO? Scott Brown and Brendan Rodgers with the Scottish Cup, but the skipper now has a huge decision to make on his future. Pic: Geo.

“You certainly have to look at it and weigh it up. He has been an incredible servant for the club. But I think he has earned that time to make his choice.

“I have spelt out to him how important he is here, but I have also given him an unbiased look at it. Football is a very short career.

“They are old enough to make their own decisions, but I can speak to them openly and from both sides.

“There is no time limit. In the meantime I just need him fit and playing.”

And Rodgers insisted Celtic’s door will always be left open for his return as a future manager.

He added: “Absolutely. No doubt. He is a really influential figure in the changing room and, like I say, whatever happens in the future there will always be a role back here at Celtic.

“You never know, he might one day do what Neil Lennon did and captain the club for so long and then move into management, if he is mad enough!

“I took him out of the coaching side of things when I came in to get him focused on playing. But he has leadership qualities and skills.”

* DON’T miss the unbeatable match report and the best action images from this afternoon’s Hibs v Celtic game at Easter Road – only in your champion CQN.