SCOTT BROWN has revealed the heartbreaking moment he will face when his glittering 14-year career at Celtic ends – and cannot say a proper farewell to the Hoops support.

The inspirational skipper, who will be 36 in June, will leave Parkhead in a two-year deal with Aberdeen in a player/coaching role alongside his former Hibs team-mate and personal friend Stephen Glass.

Brown took the monumental decision to move on, but he acknowledges he will face heartache in not being able to say goodbye to the fans who welcomed him to Glasgow in 2007 when Gordon Strachan paid out £4.4million to the Easter Road club for his considerable services.

The pandemic has wiped out any hopes of a rousing send-off to the influential captain who has won a phenomenal TWENTY-TWO honours at Celtic. 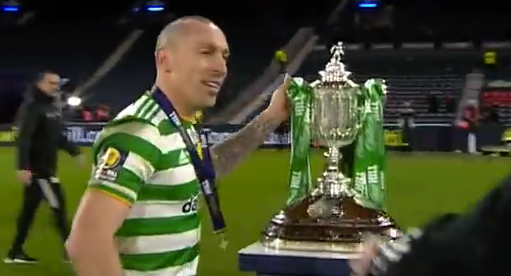 THE QUADRUPLE TREBLE…Scott Brown with the Scottish Cup last December.

Even if the holders, who play Falkirk in Glasgow in the third round tomorrow night, reach their fifth successive Scottish Cup Final, due on Saturday May 22, Hampden will still be a ghost ground.

Brown said: “The sad thing is I won’t get to say my goodbyes in front of 60,000 fans. They’ve been a huge part of my journey over these past 14 years and I’ve got a lot of love for them.

“I wouldn’t be here winning trophies without them. This season has been hard for everyone and we’ve certainly found it hard having no fans in the ground.

“It has just shown what the fans bring to Celtic Park.

“It’s been a wonderful career for myself. I’ve enjoyed the moments with the fans, but it’s just a pity I can’t share the last remaining games with them in the stadium.

“I’m looking forward to playing between now and the end of the season and playing as many games as possible, hopefully getting to another Cup Final, as well.”

A CELTIC MAN…Scott Brown and the club crest after the Scottish Cup Final win over Hearts.

Brown, speaking to the Daily Record, continued: “I’ve never really thought about playing against Celtic – I will be now! I’ll worry about that when it happens. I’m sad I can’t say goodbye right now, but I’m sure they understand the situation.

“I’ve had some lovely messages on social media and it’s been much appreciated.

“I’m sorry I can’t get back to them all, but it’s been great. I’ve had 14 fantastic years and wouldn’t change it for the world.”

The former Scotland international powerhouse admitted he canvassed opinions from many associates in the game, including former manager Brendan Rodgers, before making his decision. 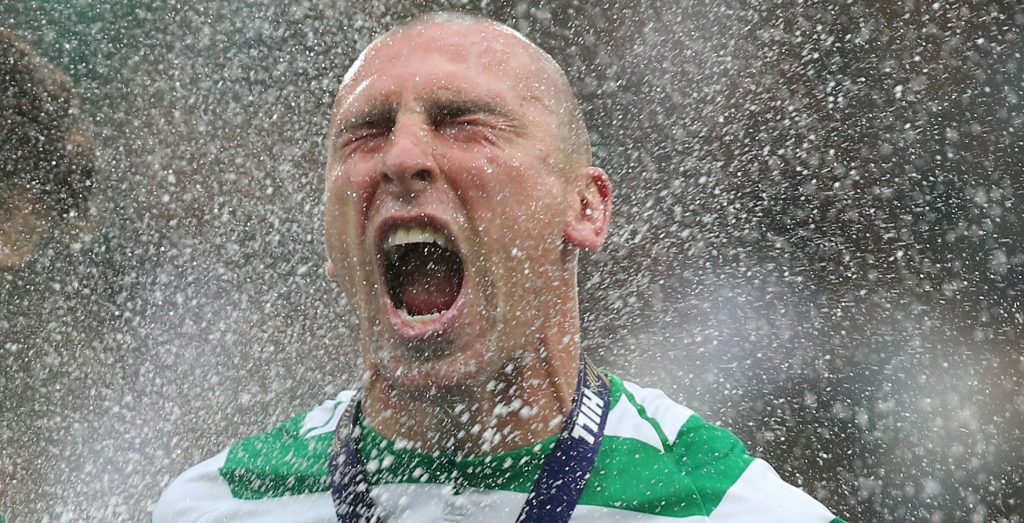 THE TREBLE TREBLE YELL…Scott Brown celebrates after the 2-1 Scottish Cup Final win over Hearts on May 25 2019.

Brown added: “I spoke to a lot of people. I spoke to Brendan, I spoke to other people like that.

“Let’s be honest, I’m not getting any younger and to go into this new chapter and to learn from a fantastic manager in Stephen is going to be huge for me.

“It was a big decision, but it has come at the right time of my career to move on and have a fresh challenge. It’s something I’ll look forward to. I’ve always been passionate about going into the coaching side of things and this gives me the best of both worlds.

“I’m still under contract at Celtic and I’ll need to make sure I’m fit and available for every game to make sure we have a good finish to the season.

“We’ve got a huge game against Falkirk and we need to get in to the next round of the Scottish Cup.

“We can’t talk about Cup Finals – we need to get there on merit.”