SCOTT BROWN admitted Celtic are not pitch perfect  at the moment after performing on the immaculate Mestalla playing surface last night.

The Hoops skipper put in a Man of the Match performance – as CQN highlighted in our match report – as the 10-man Celts went down 1-0 to topple out of the Europa League on a 3-0 aggregate scoreline.

Brendan Rodgers’ side dominated until the ridiculous second yellow card for Jeremy Toljan in the 37th minute and the Spaniards eventually broke their resistance with a 70th-minute strike from Kevin Gameiro, who had just come on as a substitute.

Even at that, the visitors could have been ahead with two good chances falling the way of central defender Kristoffer Ajer who skied a first-half rebound into the crowd and then headed over from four yards following a clever free-kick from Ryan Christie just after the hour mark.

Unfortunately, the tie was lost in Glasgow last week when the Spanish aces controlled most of the game and claimed goals on either side of the interval. 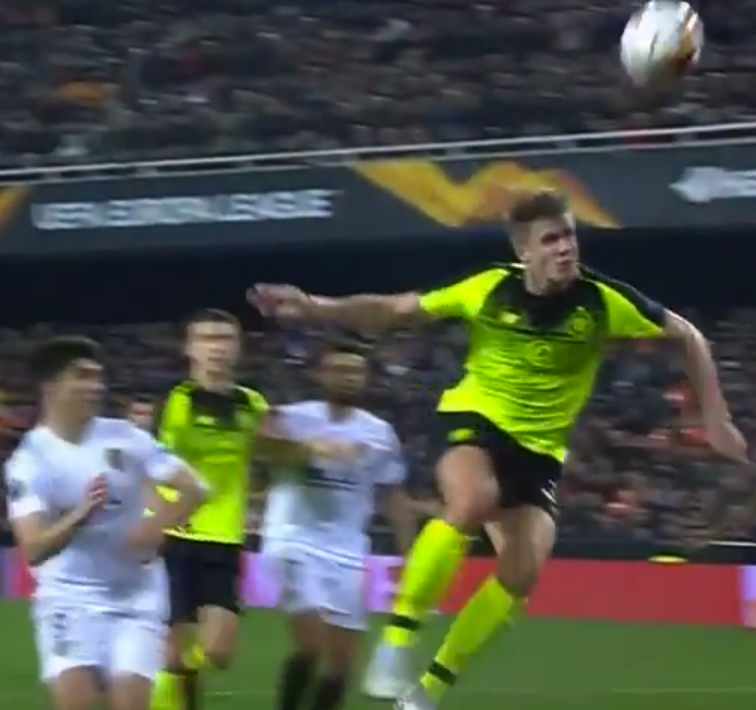 In January, Brendan Rodgers revealed the new pitch at Parkhead had been struck by a “slight disease” and Brown made comparisons with both surfaces as he prepared with his team-mates for the Premiership visit of Motherwell on Sunday.

He said: “We played really well, played proper football on a proper football pitch and, until the sending off, we were the better team, creating chances. We just didn’t get the ball in the back of the net.

“The first performance back at Celtic Park wasn’t good enough, but, then again, you look at the difference of the pitches.

“Their pitch was incredible and we knocked the ball about really well. Celtic Park is not so good just now.

“Hopefully, our pitch gets better and we go on a good run in the league now. We spent a lot of money on the park and it is not up to the standard that we want it to be.

“We don’t want Astroturf pitches, we want proper pitches. But we need to make sure we’re looking after the pitches and we have the best quality pitches for the SPFL, so there is good football and it is not just kick and hope.”