Celtic Quick News on News Now
You are at:Home»Football Matters»BROONY SECOND ONLY TO CAESAR
By CQN Magazine on 29th November 2016 Football Matters
SCOTT BROWN is now the second most successful captain in Celtic history after Sunday’s 3-0 Betfred League Cup Final triumph over Aberdeen.
The 31-year-old midfielder, who was signed by Gordon Strachan for £4.4million from Hibs in 2007, picked up his 11th trophy as a player at Hampden – and his ninth as skipper. 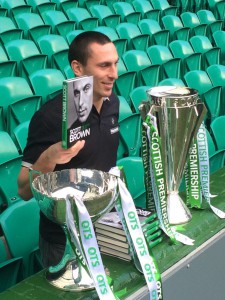 Brown has led the side since he was given the treasured armband during the ill-fated Tony Mowbray regime in 2010.
The Scotland international equalled Neil Lennon’s haul as a player, but is still well behind the legendary Billy McNeill.
Brown has lifted five league titles, two Scottish Cups and two League Cups as the on-the-field leader.
McNeill, though, won TWENTY-THREE pieces of silverware during his reign, including, of course, the European Cup.
Caesar also led Jock Stein’s memorable team to nine league championships, seven Scottish Cups and six League Cups.