The Celtic skipper will lead the eight-in-a-row champions against Hearts in Edinburgh this evening and he accepts he will get his usual ‘welcome’ from the home support.

And combative Brown admits it’s all music to his ears.

Back in November 2003, the 34-year-old midfield powerhouse, then emerging as a genuine talent at Hibs, dodged an ordering-off after a wayward challenge on rival captain Steven Pressley. And since that eventful derby clash in the capital, the player has received special treatment from the opposing supporters.

Brown, speaking to the Daily Record, said: “I love going to Tynecastle with the fans right on top of you. You hear every single thing they say. It’s lovely, there is always a lot of them saying nice things about me!

“But that good atmosphere is what it’s all about. I just go there to show them what I’m about and, hopefully, they’ll keep singing about me the next time.

“My first game there? I probably should have got sent off! Against Elvis (Steven Pressley) I think it was. I smashed him a beauty and Hugh Dallas was the referee.

“Somehow, he let me away with it, I was already on a yellow. 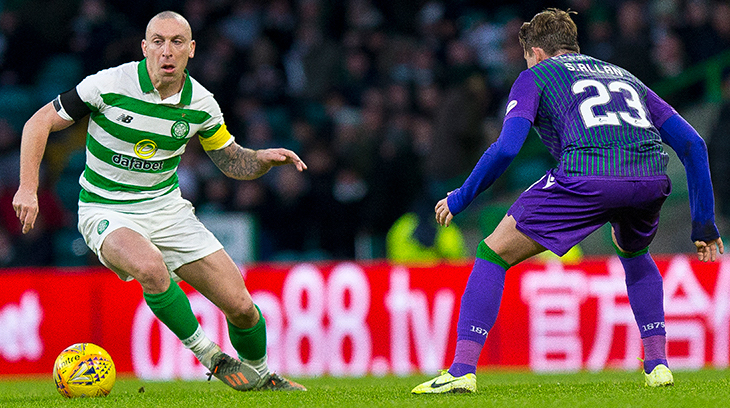 “Staying in Edinburgh, I know a lot of Hearts fans, so I don’t want any of them having the bragging rights after the game.

“If I’m out in Edinburgh, out at the Christmas markets or something, I always get a bit of that friendly banter, depending on what the result is.

“But, listen, with the run we’re on now, everyone wants to beat us.”

Brown was part of the Hoops line-up known as ‘The Invincibles’ who were thrashed 4-0 at the same venue almost two years ago to the day when their remarkable unbeaten run came shuddering to a halt.

He added: “Hearts played fantastic that day while we didn’t turn up. We just thought we could pass the ball and make it nice and easy.

“It’s always in the back of your mind that no matter what happens, you can always come back by scoring a goal from nowhere, but that day we just weren’t at the races.

“You need to do the hard work and our performance against Hibs on Sunday showed that our pressing is back, the legs are back.

“Some of the lads got a wee rest against Cluj, so, hopefully, we’re back to our best.

“It is always good to get a wee rest now and then, go and recharge the batteries. We have four games now before the winter break, we need to make sure we are focused and ready for these games.”