SCOTT BROWN’S old Hibs team-mate Steven Whittaker will be out to spoil a Green Party at the weekend.

The Celtic skipper and his team-mates could have the opportunity of sealing the champions’ eighth successive crown at Easter Road on Sunday.

If Steven Gerrard’s Ibrox challengers fail to beat Hearts at Tynecastle and Neil Lennon’s side overcome his former team in Edinburgh 24 hours later the flag will be flying high in the east end of Glasgow as the club zeroes in on the magical 10 in a row.

However, Whittaker, now in the 19th season of his career which began at Hibs along with the Hoops captain and another ex-Celt Derek Riordan, is determined his pal will not be celebrating at the weekend.

The former Scotland international defender, 34, speaking to the Edinburgh Evening News, said: “If Celtic can do it on the day that will be a huge incentive for them, but even if they can’t I’m sure they’ll want to make sure they can get the title wrapped up as quickly as possible. 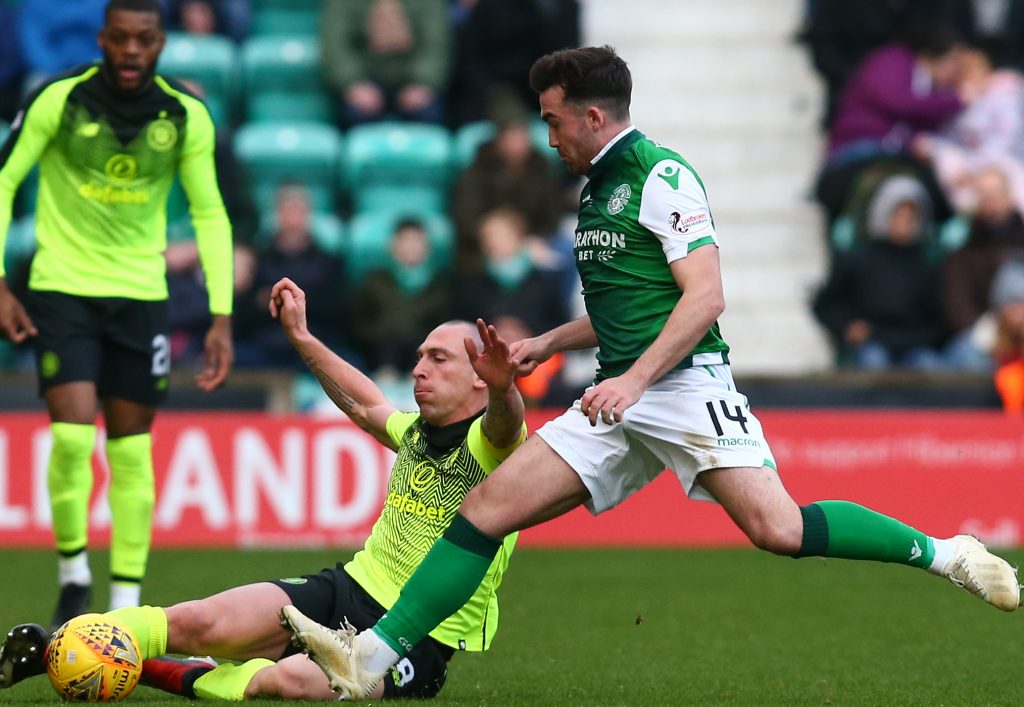 “Obviously, you don’t want to see them winning it on your pitch, but, regardless of how things are, it won’t change our game plan in any way.

“No matter what Celtic have to play for on the day, we’ll only have the three points in our sights.”

Whittaker, back at the Leith outfit for a second spell having played at Ibrox and Norwich City, added: “Scott’s career speaks for itself, it’s been fantastic and I am sure he will be hoping to win a couple more trophies before the end of this season.

“Every time he’s been written off he just bounces back. I saw it with Davie Weir at Rangers playing up to and beyond 40.”

Ironically, the last time the teams met in the Premiership in Edinburgh in December, interim gaffer Lennon was in the Hibs dug-out in opposition to Brendan Rodgers and the title kings were a goal down in the early moments as they crashed 2-0.

Brown played the entire 90 minutes and was booked in a dire display from the Hoops.

The 33-year-old Celtic onfield leader is hoping for a vastly different outcome this time around.