Celtic Quick News on News Now
You are at:Home»Latest News»BROWN BLOW BUT MULGREW GOOD TO GO!
By CQN Magazine on 25th November 2015 Latest News
CELTIC suffered a massive blow tonight when skipper Scott Brown was ruled out for up to THREE MONTHS with a knee injury.
The Scotland international midfielder was expected to have a chance of playing against Ajax in tomorrow night’s Europa League clash.
However, after medical tests, came the stunning news that Brown would be out until next year.
Brown sustained the injury after limping off in the Hoops’ 0-0 draw with Kilmarnock at Parkhead on Saturday. 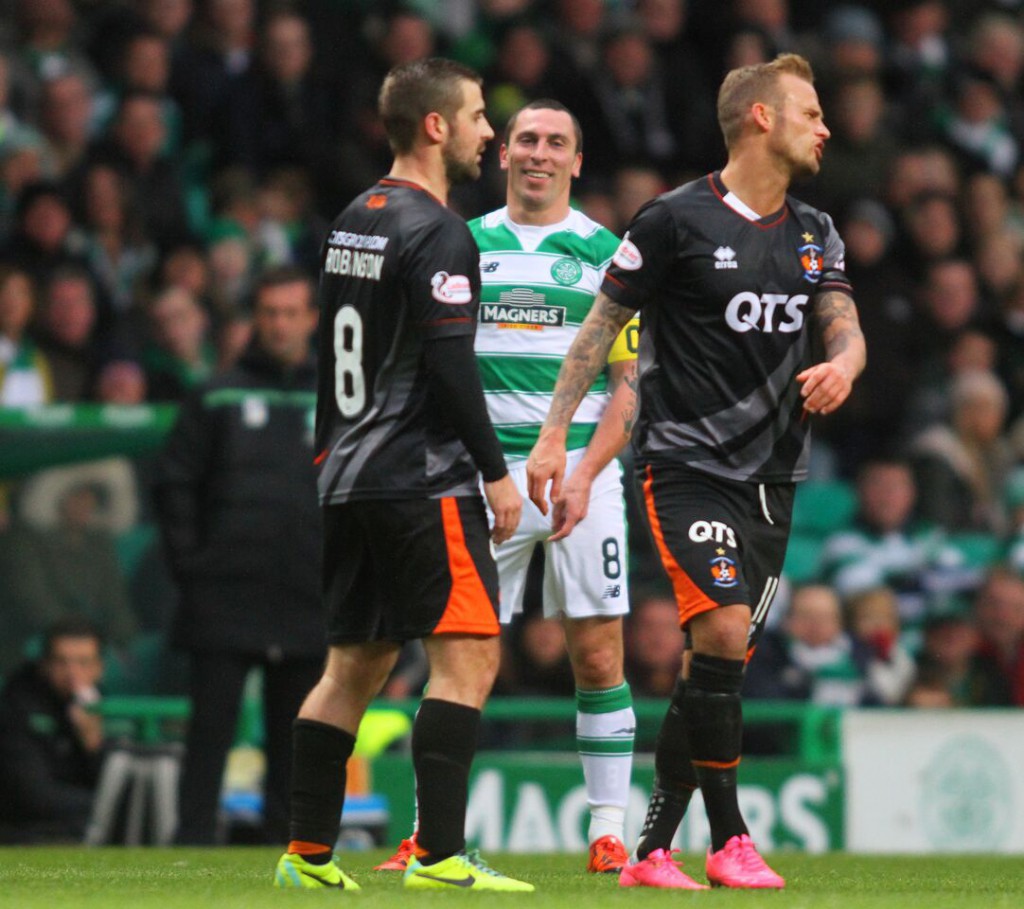 When asked about the player’s condition, Ronny Deila replied: “We don’t know for sure yet, but he could be eight to 12 weeks.”

The Celtic boss confirmed that his star midfielder had a scan on Monday, but was still not sure if Brown would need surgery on his aggravated knee injury.

Delia added: “We are not sure yet, but, hopefully, that is not necessary.”

Brown’s injury means the champions will be without their captain as well as suspended pair Nir Bitton and Stefan Johansen.

Deila is still confident any makeshift midfield will be able to compete with their Dutch rivals.

He said: “I’m not fearing anything, but there will be big changes in the midfield.

“We will need to put together a new midfield, but we have a lot of good players and we will have a good team tomorrow.

“I have in my mind the team. We have to win the game and the same goes for Ajax, as well. It’s a big opportunity for us.”

It could therefore be crucial  that CHARLIE MULGREW has declared himself fit for our Europa League clash with Ajax tomorrow night.
The versatile Hoops star has been out of action since sustaining a thigh injury in a 2-1 defeat to Aberdeen at Pittodrie on September 12.

Mulgrew’s return to fitness is great news for boss Ronny Deila who will be without the suspended midfield double-act of Nir Bitton and Stefan Johansen and injured skipper Scott Brown against the Dutch outfit.

The Scottish international confirmed the news when he took part in a fans’ web forum last night and declared: “I’m available for the game against Ajax on Thursday.”
It was assumed the 29-year-old still hadn’t recovered from his long-term injury, leaving Deila short of players in the middle of the park. Kris Commons will almost certainly sit out the must-win game.
Mulgrew could line up in place of Israeli ace Bitton against Frank de Boer’s side.
If the Hoops are to have any hope of remaining in European competition after Christmas they will have to beat Ajax and then Fenerbahce in Istanbul on December 10.
——————————————————————————
Have you ordered your copy of CQN’s fabulous new book THE WINDS OF CHANGE yet? Following on from Caesar & The Assassin, we pick up the story in 1991 when Billy McNeill gets the sack. Liam Brady gets the job and Celtic fans have to endure some real torture before things turn around. Fergus comes in and a new stadium is built. Managers come and go and this book takes us through the managerial reigns of Brady, Macari, Tommy Burns, Wim Jansen, Dr Jo Venglos, Barnes, Dalglish (as caretaker) and of course Martin O’Neill.
You were there throughout these years, now relive the entire journey: 1991-2005. It’s a Celtic rollercoaster…order THE WINDS OF CHANGE direct from CQN here or click on the image below. You won’t be disappointed!