SKIPPER Scott Brown has hailed the signing of Kolo Toure and admitted he will be happy to share some of his leadership responsibilities with the veteran central defender.

The 35-year-old Ivorian international is expected to go through the formalities today of agreeing a one-year deal with Celtic. 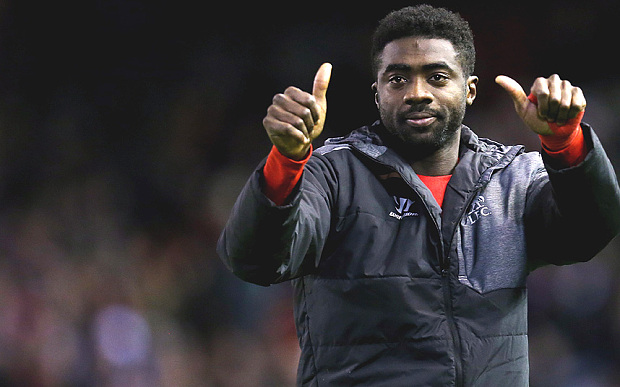 Toure, who was released by Liverpool at the end of last season, passed a medical in Glasgow yesterday, but will not be involved in the Champions League qualifier against Astana in in Kazakhstan on Wednesday.

He was a member of Arsenal’s ‘Invincibles’ squad, who in 2003-04 won the English Premier League without losing a match. Manchester City paid £14million to lure him to the Etihad five years later.

After the 1-1 draw with Leicester City, Brown, 31, said: “Kolo is 35, but he is still rapid and built like a brick outhouse, shall we say.

“He is a great player who has been around. He has been at top clubs and was part of that great Arsenal team. He is a leader on and off the field, so he will bring great experience for us.

“We’ve got a lot of pace in the team now and he’s definitely going to add to it. He’s strong, aggressive in the air and good on the ball — all the qualities we were looking to bring in.”

Brendan Rodgers welcomed the signing and said: “I brought Kolo into Liverpool to add that bit of experience and help the centre-halves there at the time.

“I think you saw from his impact there, particularly last season, that he was a very important player for Jurgen Klopp.

“He played in the Europa League final in May and in the big games, for me, he was outstanding.

‘Kolo looks after himself and he’s a wonderful professional. With a lot of young players in our squad, he can really help them and be of great experience to someone like Scott Brown, who is a wonderful leader.

“It will be nice for Scott to have someone behind him who’s got that real big-game experience. He can do very well for us.”

Brown added: “It’s good to have someone talking for 90 minutes behind you. We’ve had that in the past and he’ll bring that quality to us.”

If you don’t laugh your socks off we’ll be surprised! Get your copy exclusively at www.cqnbookstore.co.uk now for only £9.99.