Celtic Quick News on News Now
You are at:Home»Latest News»BROWN TARGETS KILLIE RETURN
By CQN Magazine on 19th November 2015 Latest News
SCOTT BROWN is aiming for a return to action against Kilmarnock in the Premiership match at Parkhead on Saturday.

The Celtic skipper has been sidelined since pulling out of the team during the warm-up before the League Cup quarter-final against Hearts at Tynecastle last month.

Brown said: “It’s always frustrating when you’re not playing. That’s what we get paid to do, it’s what we enjoy doing and that’s why I came to Celtic because we play in front of great fans and against some great clubs.

“We’ve had some good results recently and the lads have done well against Aberdeen and Ross County, as well.

“I’ve been doing a lot of running, changing direction, just to make sure I’m back to 100 per cent. I’ve managed to train the past couple of days, so it’s all good.”

Now in his ninth season at the club, the 30-year-old midfielder is the Hoops’ most experienced player.

At the launch of his autobiography which is titled SCOTT BROWN MY CELTIC STORY, Brown admitted being captain is a role of which he is immensely proud, while he describes in the book about signing for Celtic as ‘the best decision I made in my career’. 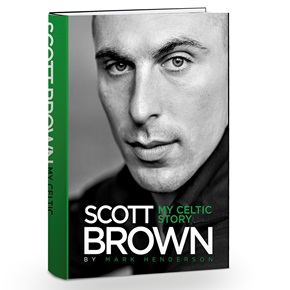 He added: “There have been ups and downs – that’s the way it’s always going to be – but it’s been great.

“I hope I can finish my career here. I’ve enjoyed every single moment of it and it would be hard to go on anywhere from this club now, having played with all the talented players I have over the past eight years.

“When you’re growing up, you play football for the love of it and that’s what I’m doing now. I enjoy it and I feel lucky enough to be in this situation.”

CQN is delighted to have produced Scott’s book for Celtic. You can order it now from the new look CQN Bookstore HERE or click on the links below. You can also order your copy of THE WINDS OF CHANGE which is ready for shipping now and CELTIC THE EARLY YEARS by Brendan Sweeney. CQN produced all three of these books so we certainly have been busy!