SCOTT BROWN’S Testimonial Match against the Republic of Ireland has been confirmed for Sunday, May 20, as reported by CQN earlier today.

Former Hoops boss Martin O’Neill will bring his international squad to Parkhead only 24 hours after the Scottish Cup Final.

A proportion of proceeds from the money-spinning occasion will go towards various charities and causes of big-hearted Scott’s choice, including the family of ex-Celtic and Ireland midfielder Liam Miller who passed away with cancer last month at the age of 36.

Willie Haughey, chairman of the testimonial committee, said: “We are delighted to announce this match which we are sure will capture the imagination of supporters and be a fitting tribute to a fantastic player and a great Celtic and Scotland captain.

“Scott has served Celtic brilliantly now for more than 10 years, establishing himself as a true fans’ favourite.

“He is someone who has given his all to the club, and for the past decade he has dedicated himself to Celtic and played a crucial role in delivering a phenomenal level of success to the club’s supporters.

“We would sincerely like to thank Celtic Football Club for granting Scott this Testimonial Match and, of course, we are very grateful to the FAI and Martin O’Neill for agreeing to travel to Glasgow to take part in this celebration of one of the club’s most successful players and greatest servants.

”Celtic chief executive Peter Lawwell said: “We were really pleased to grant Scott this testimonial game and we wish Scott and the Committee all the very best for this match, which we are sure will be a fantastic occasion 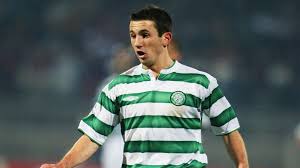 LIAM MILLER…Scott Brown will make a donation to the family of the
former Celt who passed away last month.

“It has been an absolute pleasure to work with Scott during his time at the Club. He is a man who has given his heart and soul to Celtic and been such a pivotal figure for the club for more than a decade.

“He is highly-deserving of this honour and I am sure our supporters will be keen to join the club and the Irish national team in celebrating such a great career.”

Boss Brendan Rodgers added: “When I became Celtic manager, I ensured one of my first jobs was to meet Scott, as we discussed our plans for the future. He is a hugely important figure at the club and someone who I have been privileged to work with.

“With a tremendous will to succeed in everything he does, he is someone who we know we can depend on, someone you want in your team and a man who has been the most influential player in Scottish football for some time.

“He operates at the highest level, as a player and a captain and I know he is greatly appreciated by our supporters who see, week in, week out, the energy, passion and commitment he gives to Celtic.

“He gives everything he has to our cause and through his talent and ability has been a major part of Celtic’s success, not only in my time at Celtic but for many years.

“We will be delighted to take part in this match to honour a great man and a great Celtic captain.”

Tickets for the game – which will have a 2pm kick-off – go on sale on Wednesday.