RYAN CHRISTIE has a full head of steam as he prepares to play a key role for Scotland in their vital UEFA Nations League tie against Israel at Hampden tomorrow night.

And the in-form Celtic midfielder hopes he doesn’t meet any nutters at the national stadium after being headbutted in two successive games against Livingston and Albania.

Last week in West Lothian, it was the home side’s Dolly Menga who thrust his head into the face of Christie in a shocking incident that was somehow missed by referee Kevin Clancy and his assistants.

The Livi aggressor was later banned for two games after the SFA review panel looked at video evidence.

On Saturday night in Shkoder, with the Scots 1-0 ahead on their way to a 4-0 victory, it was the turn of Albanian skipper Mergim Mayraj – as CQN stated in the match report – to try to rearrange the Highlander’s facial features with a crazy lunge with his forehead.

On this occasion, though, there was no escaping immediate punishment and the Russian referee produced a swift red card.

Christie said: “I don’t know what happened. I think it was him who made the first challenge. I chased after the ball and kind of bumped into him.

“He seemed to lose his head and he went for me. I was just an innocent bystander and he stuck the head on me.

“I don’t know what it is, that’s twice in a week. Thankfully, there wasn’t too much damage and it was a great night.

“That was an absolutely huge win. We desperately wanted to get the result and momentum to take into the Israel game.

“To score four goals and keep a clean sheet was really pleasing.

“We’ve got plenty of confidence going into a big game at Hampden.” 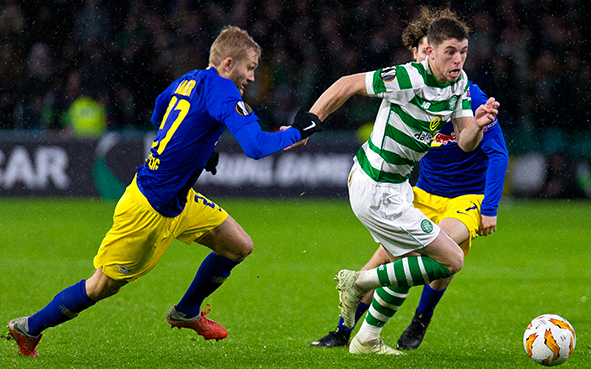 HEAD BHOY…Ryan Christie shows his resurgent form in the 2-1 win over RB Leipzig.

Despite the double assault, the 23-year-old playmaker, who agreed a new three-year deal last week, insisted: “It’s been a great few weeks. It was great to be part of it in Albania on my first competitive start.

“It felt really comfortable out there and we were linking up well. The manager gave me a free role and it’s allowed me to kick on. Hopefully, I can stay in the side.

“The main thing was we looked a real attacking threat.

“It was brilliant to see James Forrest and Ryan Fraser getting on the scoresheet. We posed a threat from all areas of the team.

“James is one of the best players I have played with. People are starting to see it now, as well.

“I don’t know if he’s underrated or it’s just people have seen him for years.

“But he’s a great player. He can beat three or four players, he creates chances for others and scores goals. What more could you want?

“Look at his touch for his second goal the other night. It was sensational. It’s great for Scotland to have guys like him and Ryan Fraser who have tremendous pace and great composure in front of goal.”

Christie, Forrest and Hoops team-mate Callum McGregor, who also starred in the emphatic victory over the Albanians, are all likely to get the nod from international gaffer Alex McLeish to play their part against the Israelis tomorrow night.