VASILIS BARKAS, the most expensive keeper in Celtic’s history at £4.5million, has played his last game for the Hoops.

The Greek netminder arrived from AEK Athens in July 2020 as Neil Lennon searched for a replacement for Fraser Forster, who returned to parent club Southampton after a successful one-season loan, and Craig Gordon, who quit at the end of his contract to reunite with Hearts.

Barkas, though, has proved to be an expensive mistake with a series of high-profile blunders that saw Scott Bain and Conor Hazard get their chance during the wretched campaign that saw the team limp through their first trophyless term in 11 years. 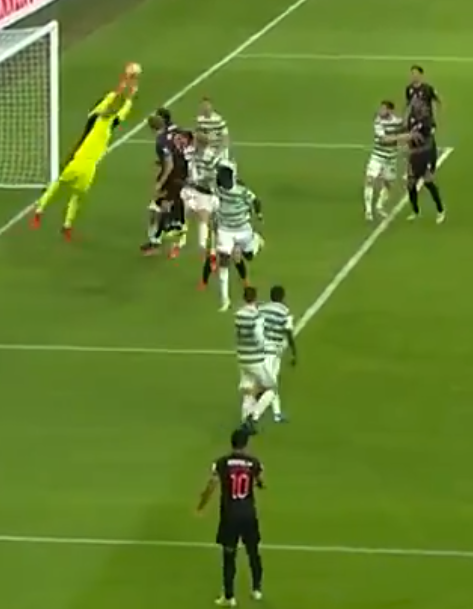 X-CERTIFICATE GOALKEEPING – no matter which way you look at it. Brazilian Evander (No.10) sends a free-kick sailing over flapping Vasilis Barkas into the Celtic net for FC Midtjylland in the 1-1 draw at Parkhead in July. It is likely to be the Greek fall guy’s last appearance for the Hoops.

Ange Postecoglou insisted it was a fresh slate for every Hoops player when he arrived as Lennon’s replacement in June.

Barkas has made one competitive appearance during the new gaffer’s first six months and has disappeared from view in recent weeks, as CQN revealed at the start of last month.

The shaky shotstopper gifted FC Midtjylland an equaliser in the 1-1 draw in the Champions League qualifier at Parkhead in July and was replaced by Bain in the return where Postecoglou saw his team lose 2-1 in extra-time.

Joe Hart, the 34-year-old 75 times-capped England internatinal No.1 arrived in a £1million switch from Spurs on August 3 and has been an ever present, playing in 26 consecutive games.

There appears little chance of Barkas figuring in the squad for tomorrow night’s final Europa League Group G encounter against Real Betis under the lights in the east end of Glasgow.

Hart will start against the Spanish cracks and there is every likelihood English teenager Tobi Oluwayemi, who arrived from Spurs Academy in February 2019 and agreed a two-year extension in the summer, will be named alongside Bain on the substitutes’ bench.

The Hoops are now prepared to cut their losses on the 27-year-old unconvincing custodian and allow him to leave next month.

Barkas, who is under contract until May 31 2024, is attracting attention from a number of clubs in the Turkish Super Lig and the Hoops are ready to offload him on either permanent or temporary terms.

A transfer is the obvious solution to the keeper’s plight. He has struggled since day one in Scotland and has also lost his international place with Greece to Benfica’s Odysseas Vlachodimos.

OOPS…Vasilis Barkas is a picture of misery as another effort slips past him.

CQN pointed out last month Barkas was so far out of the first team picture he wasn’t even among the three keepers who went through a warm-up routine before the Premiership outing against Dundee at Dens Park on November 7.

Hart, Bain and Hazard were involved in a series of loosening-up sessions before the 4-2 victory.

Barkas had been listed in the original travelling pool of players, but was a no-show on Tayside.

After 23 outings in total, it looks as though the Celtic fans have seen the last of the unimpressive Greek.