The midfielder played his part in the Hoops’ seventh consecutive trophy triumph during Brendan Rodgers’ reign as they overcame Aberdeen 1-0 in the Betfred League Cup Final at Hampden yesterday.

The Irishman is now the first Parkhead gaffer since the legendary Jock Stein to win the competition three years in a row.

McGregor said: “This never gets tired. When you play at a massive club then winning has to be part of your DNA and you have to turn up for these games.

“It is amazing how consistent the success has been for this group of players. It comes down to the manager and how relentless he is, but also to the players because we are pushing each other every day. There is competition for places and that drives the standard up.

“We seem to be creating history every time we get to a Final. You can never take that for granted. You might want to be a winner and you might feel that you deserve to be, but you have to actually go out and do it.

“I also think that, as players, you want to enjoy it and take stock of it. We have to enjoy it while it lasts because it is not every day that you get a generation of players that we have now who are so hungry and so desperate to keep winning.

“We have married that hunger with a manager who knows what it takes to succeed at the top and I think it is important that we try and appreciate just what an achievement it is.

“That isn’t to say that you take your foot off the pedal, but that you just enjoy what we have done. That isn’t easy this month given the volume of games, but even if it is just a day or so, you should take the chance to reflect on it. 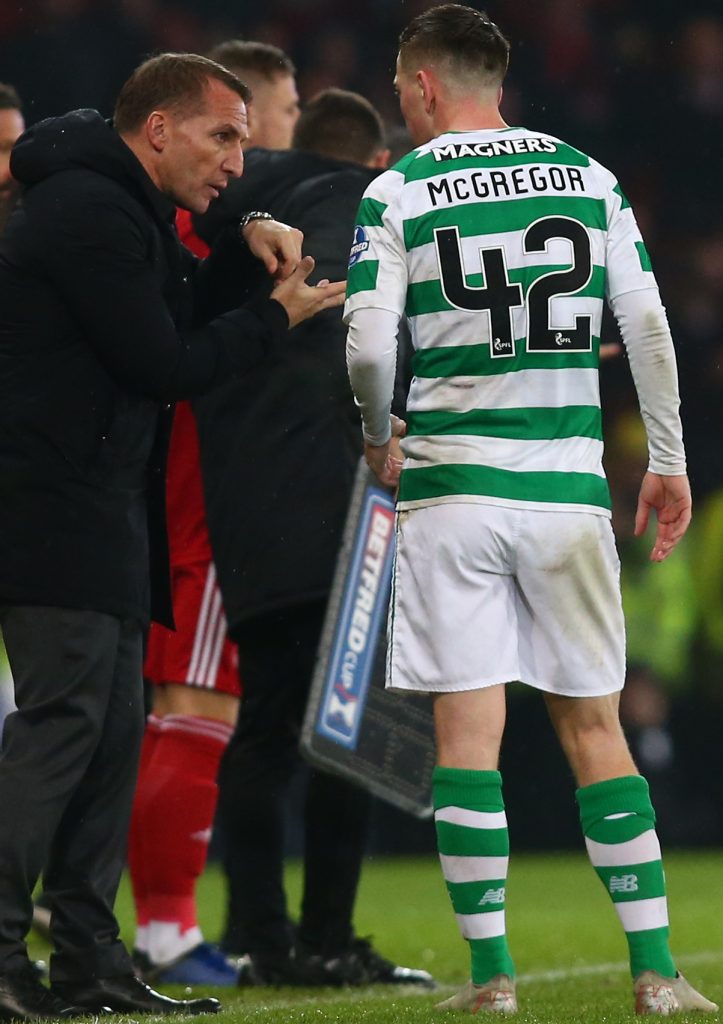 TOUCHLINE TALK-IN…Brendan Rodgers gets his message across to Callum McGregor. Pic: Geo.

Scotland international McGregor added: “Nothing is guaranteed. You have to fight and be aggressive and be competitive – everything that Aberdeen were yesterday – and it is not a given that if you turn up you win the game.

“It might look like that from the outside, but there is a lot of hard work that goes on behind the scenes here from absolutely everyone and there has never been a game we have walked out onto the pitch thinking that it would come easy.

“We know we have quality, but we also know that doesn’t count for much without having the heart and desire to go with it.”

McGregor and his Hoops team-mates managed to lift themselves again in a three-games-in-nine-days sprint that started with a 3-0 Premiership victory in Hamilton, followed into Thursday’s Europa League Group B confrontation in Trondheim against Rosenborg, where a Scott Sinclair header settled the issue, and onto Hampden yesterday.

The pursuit of silverware continues at Fir Park on Wednesday night against Motherwell where three points are a must in the bid for eight titles on the bounce.

McGregor and Co will once again be up for the fight – as they demonstrated so capably against a determined Dons outfit who snapped and snarled their way through 90 minutes.

The champions return to home territory for the first time since beating RB Leipzig on November 8 when they face Kilmarnock on Saturday.