Celtic Quick News on News Now
You are at:Home»Latest News»‘CALLUM HAS PROVED HE CAN PLAY ANYWHERE,’ SCOTS COACH
By CQN Magazine on 13th November 2018 Latest News

SCOTLAND coach James McFadden has hailed the impact Callum McGregor has had on Celtic since he dropped into the anchor position.

And the international hero, who will be forever remembered for his astounding winning goal against France in Paris in September 2007, hopes the skilful midfielder can carry that form into his country’s upcoming European Nations League games against Albania and Israel.

McGregor has been switched from his more attacking role to take over from crocked skipper Scott Brown – and he has been a revelation in recent outings.

He dropped into the spot between defence and midfield in the second-half of the Betfred League Cup semi-final against Hearts at Murrayfield when Olivier Ntcham limped off to be replaced by the more offensive-minded Ryan Christie.

McGregor revelled in the change as the substitute put in a remarkable 45 minutes and the Edinburgh men were demoralised 3-0 as the Hoops ran amok.

It was a similar story in the 5-0 victory over Dundee at Dens Park the following midweek and then Craig Levein’s men were on the receiving end again – this time 5-0 – when they visited Parkhead in the Premiership.  And the 25-year-old Glaswegian looked equally comfortable in the 2-1 Europa League Group B triumph over Bundesliga big-spenders RB Leipzig last Thursday.

McGregor and his team-mates were shut out in the scoreless stalemate against Livingston on Sunday where home keeper Liam Kelly received the Man of the Match award after a superlative performance that included three magnificent stops to deny the champions. 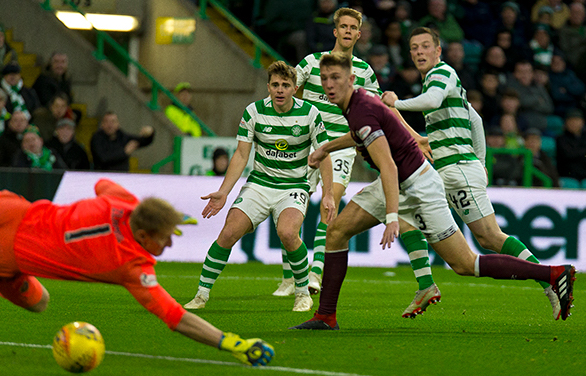 SO CLOSE…Callum McGregor is just out of luck as he attempts to cap a marvellous performance in the 5-0 win over Hearts with a shot that shaved the upright after a breathtaking run from midfield.

However, McFadden admitted he has been impressed by the player and enthused: “Callum has proved he can play anywhere. He is a very intelligent football player.

“You talk about foreign players being technical, Callum is up there.

“Over the past year or two, people were shouting for him to get into the Scotland team.

“We’ve had him in the team and we hope he can show the kind of form he has for Celtic when he’s selected for us.

“I think it coincides with the form Celtic are showing now. They are really kicking on at league level and that can only benefit us.”

The Scots are due to play in Albania on Saturday and then take on Israel at Hampden on Tuesday in two confrontations that are crucial to qualifying for the later stages of the competition.

Calmac will not shirk his responsibility in either encounter.