CALLUM McGREGOR insists Celtic are focusing on claiming their eighth successive title in what could emerge as a historic silverware run-in to the season.

The Scotland international midfielder, a contender for the Player of the Year honour with his outstanding consistency as the Parkhead men have swept all before them on the domestic front in the last three years, also has his eyes on the prize when the curtain comes down on a memorable campaign at Hampden next month.

Neil Lennon’s men are due to meet Hearts in the Scottish Cup Final at the national stadium on May 25 – the 52nd anniversary of the club’s historic European Cup triumph in Lisbon – and victory over the Edinburgh outfit would complete the phenomenal and unprecedented treble treble.

McGregor, 25, speaking to this week’s Celtic View, spelled out the aims of the team as the finishing post comes into view. 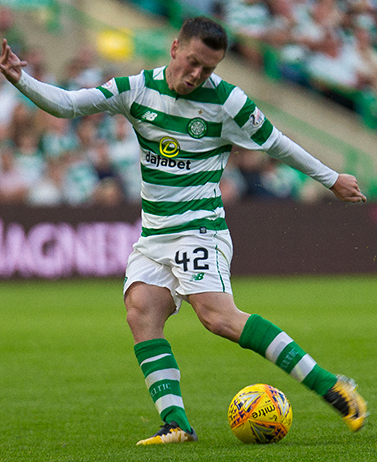 ON THE BALL…Callum McGregor is focused on silverware run-in.

ON THE PREMIERSHIP, he said: “We just want to get it over the line and get it sealed.

“To deliver the title again is the big objective for us and whether it takes one game or two games, we’ll be really focused on delivering that.”

ON THE SCOTTISH CUP, he added: “I think it will be another physical game and it’s up to us to stand up to the challenge and obviously use the big pitch to try and get them running and chasing the ball.

“We know they can be a handful on their day and obviously finals can go either way again, so we just need to be prepared for it.

“But that comes up at the end of the season and we’ve got big games before then to try and wrap the league up.”

McGregor reflected on the 3-0 victory over Aberdeen at the weekend and added: “In semi-finals, it can go either way and whoever plays well on the day can win the game. You understand that there’s a wee bit of nervousness in the crowd, but we just had to stay calm, play our game and focus on what we had been doing all week.

“Then, when the moments arrive, score the goals and that settles everyone down. I think you could see that in the middle period of the game.

“That’s when we got control, you could hear the relief around the stadium and then we all started to enjoy it.”

Celtic could have the opportunity to clinch their eighth championship flag against Hibs at Easter Road on Sunday if Steven Gerrard’s Ibrox outfit fail to beat Hearts at Tynecastle 24 hours earlier.

It could turn out to be a weekend of capital gains for the champions.