The Celtic midfielder has played a pivotal role in the club’s previous three successive triumphs in the Scottish Cup Final that have seen Aberdeen (2-1), Motherwell (2-0) and Hearts (2-1) left with the runners-up medals.

Now McGregor, who scored a whizzbang effort against Well in the 2018 victory, is getting geared up for another challenge in the showpiece showdown from the Tynecastle outfit and the Hoops’ stand-in skipper is adamant the players are still eager to sample even more success as they search for their twelfth consecutive domestic piece of silverware.

The Scotland international mainstay, speaking to Celtic TV, said: “We’ve been in this situation before.

“We did the double and treble treble which had never been done. With those achievements it makes you a lot calmer in the build-up, it gives you that hunger to succeed. To have that history behind you makes you hungrier for success.

“There’s pressure when you go into every game with Celtic, having had those experiences before certainly stands you in good stead – especially in the build-up. 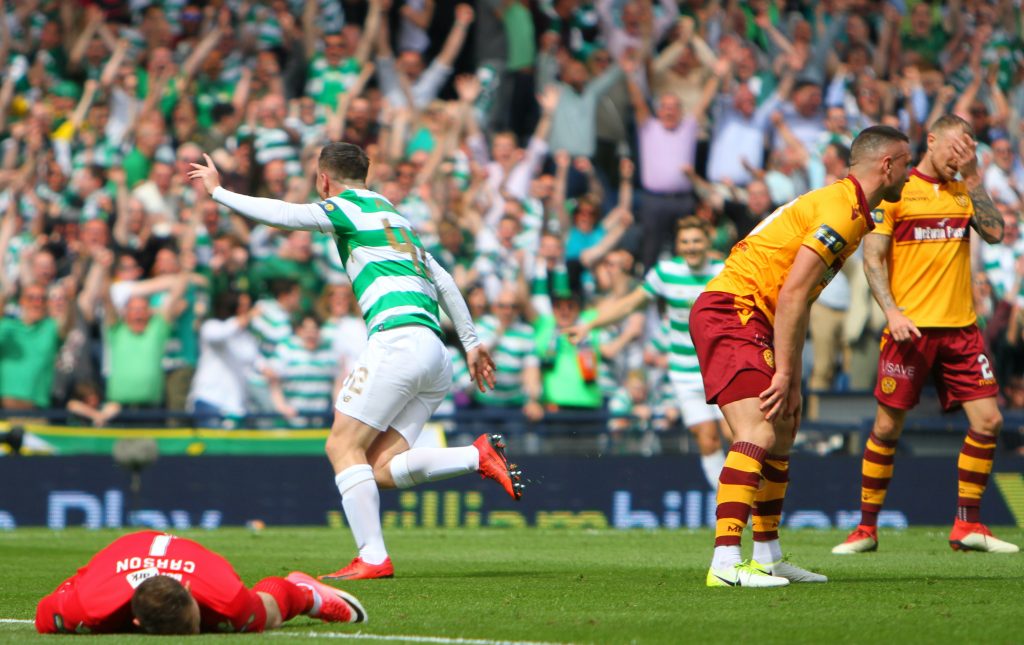 HAMPDEN HERO…Callum McGregor celebrates after putting Celtic into the lead against Motherwell in the 2018 Scottish Cup Final. Trevor Carson is helpless.

“It’s a massive opportunity to make history. When you’re a young kid aspiring to be a footballer, these are the situations you want to be in. It takes an incredible amount of dedication and hard work.

“We have to treat it like every other game. We’ve trained well this week and everyone’s more excited than nervous.”

McGregor was in at the start of the quest for an incredible quadruple treble when he starred in the 2-1 victory over Derek McInnes’ Pittodrie outfit when Tom Rogic took centre stage with the late winner to complete the first trio of trophies.

The Glaswegian got the ball rolling the following season with a volley that ripped into the Well net to settle the side. Olivier Ntcham added a second before the interval and the second-half was a formality.

Last year, it was the turn of Odsonne Edouard to hit the headlines with his second-half double salvo against the Edinburgh club, then managed by ex-Scotland gaffer Craig Levein.

History beckons for McGregor and his team-mates at the national stadium tomorrow with a 2.15pm kick-off.

It will be a fitting curtain call after four glorious years of domination of Scottish football.