Celtic Quick News on News Now
You are at:Home»Latest News»CALMAC ‘HOMES’ IN AT MURRAYFIELD
By CQN Magazine on 26th October 2018 Latest News

CALLUM McGREGOR is looking forward to returning to Murrayfield – over four years since he made his Celtic “home” debut at the rugby ground.

The Scotland international midfielder was promoted into Ronny Deila’s first team squad for the 2014/15 season after a successful loan period with Notts County.

CalMac, 25, is hoping for a similar outcome as his top team baptism if he gets the opportunity to line up against Hearts in the Betfred League Cup semi-final on Sunday.

He recalled: “I made my debut for Celtic in the away leg against KR Reykjavík and scored the only goal of the game. The return leg was my second game and it was technically my home debut for Celtic, even though it was at Murrayfield.

“It was because of the Commonwealth Games that we weren’t able to play at home.

“I remember it being a good game at Murrayfield. The stadium was nice and the pitch was decent, too. We won the first game, so we were favourites to go through and we ended up winning the second leg 4-0.

“I set up the first one in the second leg, so I was off to a good start in the senior side, having scored the winning goal on my debut.” 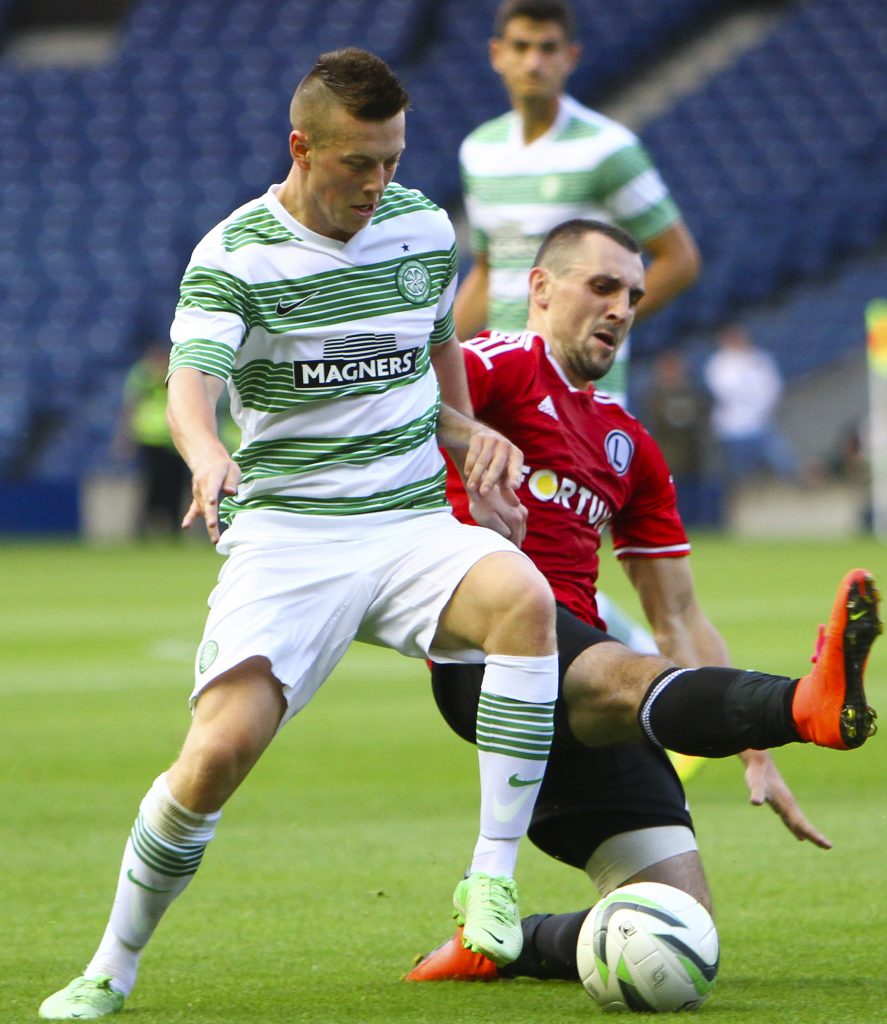 NEW BHOY…Callum McGregor in one of his first Celtic games against Legia Warsaw.

The playmaker, who has won nine major domestic honours at the Hoops, added: “The stadium was near enough full when we last played there, so it was a really good atmosphere.

“I enjoyed playing there. Obviously, I’d have preferred Hampden, but it’s not a bad second choice. The stadium makes for a decent atmosphere and I’m sure it’ll be good.

“For us, as players, we experience a good atmosphere at Hampden. Obviously, it’s nothing like Celtic Park, but no ground is. With Murrayfield, that’ll probably be the same with the stand being that wee bit closer to the pitch, so we’re expecting it to be loud.”

McGregor is likely to be handed a key role by boss Brendan Rodgers at the weekend with Scott Brown still on the missing list with an injury.

The influence of the skipper was missing in Germany last night when the champions went down 2-0 to RB Leipzig in the Europa League Group B encounter.

Now the onus will be on McGregor and his team-mates to make sure gaffer Rodgers does not suffer his first-ever domestic Cup defeat since he took over from Deila in May 2016.

* McGregor was speaking to The Celtic View, on sale now.