NEIL LENNON has admitted Callum McGregor is pivotal to his plans for Celtic as he looks ahead to another crucial campaign.

The Scotland international playmaker has been the centre of transfer speculation and has already been linked with a reunion with former boss Brendan Rodgers at Leicester City.

Lennon, though, is adamant he will NOT welcome bids for McGregor and expressed relief multi-million pound offers were not already on the table for the 26-year-old Glaswegian.

The Hoops gaffer, speaking to the Daily Record, said: “I am surprised. I’m very happy that there’s not, because he’d be probably the last one I’d want to leave, along with a couple of others, or even be unsettled at this stage.

“He’s pivotal to what we want to do going forward.

“Callum’s just brilliant. He’s just absolutely brilliant. The more he churns them out the more people take him for granted, but I don’t take his performances for granted.

“It’s a hard thing to do what Callum does, week in, week out, at such a high level. Then he goes and gets the winner on Wednesday night, as well.

“I think there’s more goals in him this season, as well, hopefully.” 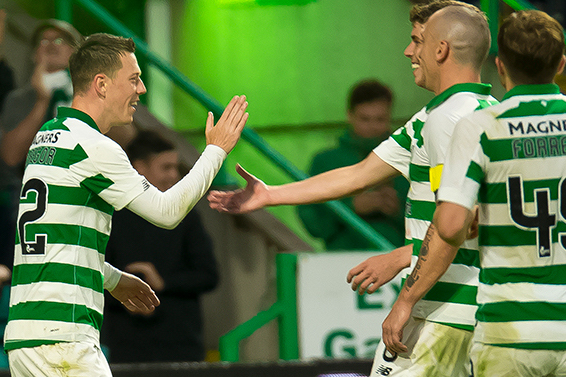 Lennon acknowledged the inevitability of the player being linked with other clubs in the enviable position of having satellite TV money to splash around.

The Irishman added: “It wouldn’t surprise me because he’s a top player. He really came to prominence under Brendan, but we want him here and we want him to play in the Champions League.

“We’re trying to make the right inroads to keep him happy and keep him at a top level.

“Every player has his price. I said the other day that Ronaldo went from Manchester United, the biggest club in the world.

“You know where we are with Kieran. We don’t want to sell any more top players if we can avoid it.

“The squad is a little bit thin at the minute anyway, a couple of injuries and we would lack a bit of strength in depth.”

The nine-times capped international took the spotlight in midweek when he rifled in the winning goal against FK Sarajevo – his 51st strike for the club since making his breakthrough into the first team under Ronny Deila in season 2014/15.

Back then, he was on the periphery. Now, as Lennon emphasises, he is pivotal to the team moving forward.