Celtic Quick News on News Now
You are at:Home»Latest News»CALMAC – THE MAN FOR ALL SEASONS
By CQN Magazine on 19th May 2020 Latest News

EVERGREEN and ever-present Callum McGregor has won titles under three Celtic manager since breaking into the first team in the summer of 2014.

Ronny Deila, who introduced the midfielder to the top side in a Champions League qualifier against FK Rejkyvak in Iceland on July 15 where he scored the only goal of the game, was the man in charge for the first two crowning glories.

The Norwegian was replaced by Brendan Rodgers in May 2016 and two more league medals were added to McGregor’s haul of fame.

Neil Lennon returned in February 2019 to guide the Hoops to an eighth successive flag and the Irishman was in the act of repeating the feat this time out with the Parkhead side leading the Premiership by 13 points with only eight games to go when football was forced into lockdown in mid-March due to the coronavirus pandemic.

When the shutters came down, McGregor, who had spent a season on loan at Notts County before his breakthrough during Deial’s reign, had played in every one of the Hoops’ league fixtures in this campaign. He figured in 50 games across all competitions and had claimed a season-best tally of 13 goals. 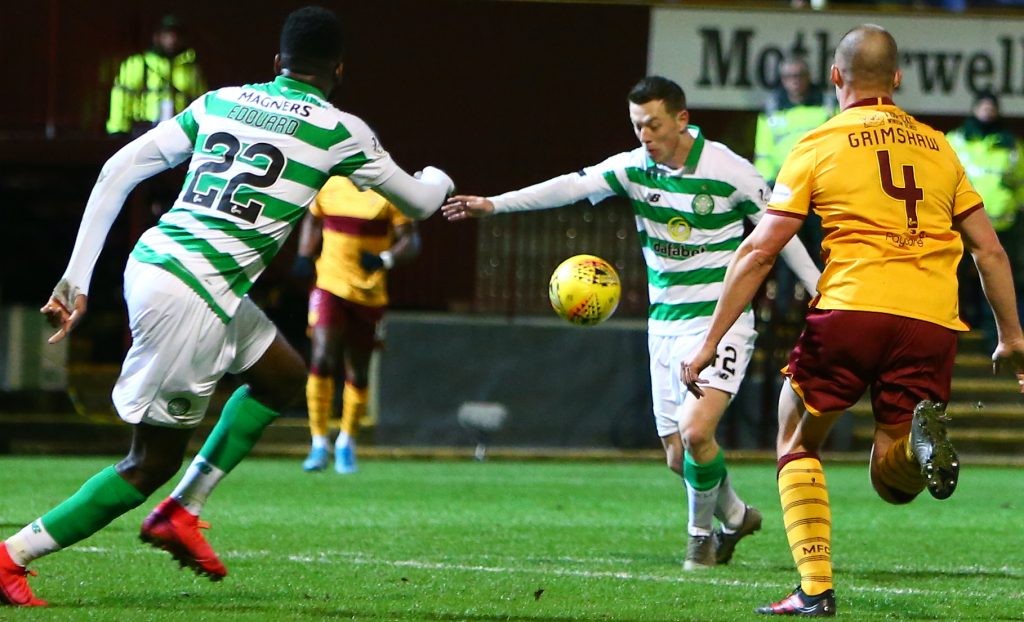 DIDN’T HE DO WELL…Callum McGregor prepares to hit the strike that got Neil Lennon’s vote as Celtic Best Goal of the Season. 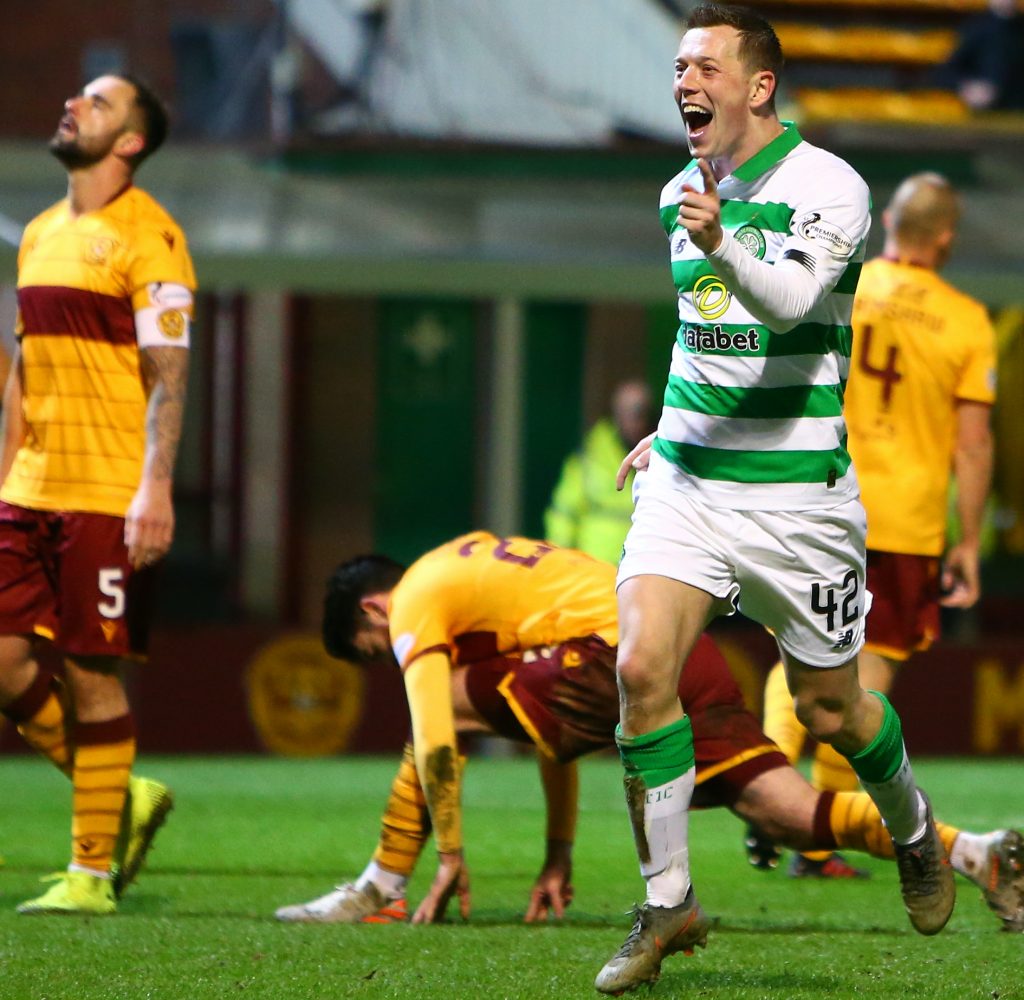 HOOP HOOP HOORAY…Callum McGregor celebrates as he scores the champions’ third goal in their 4-0 win at Fir Park in February. 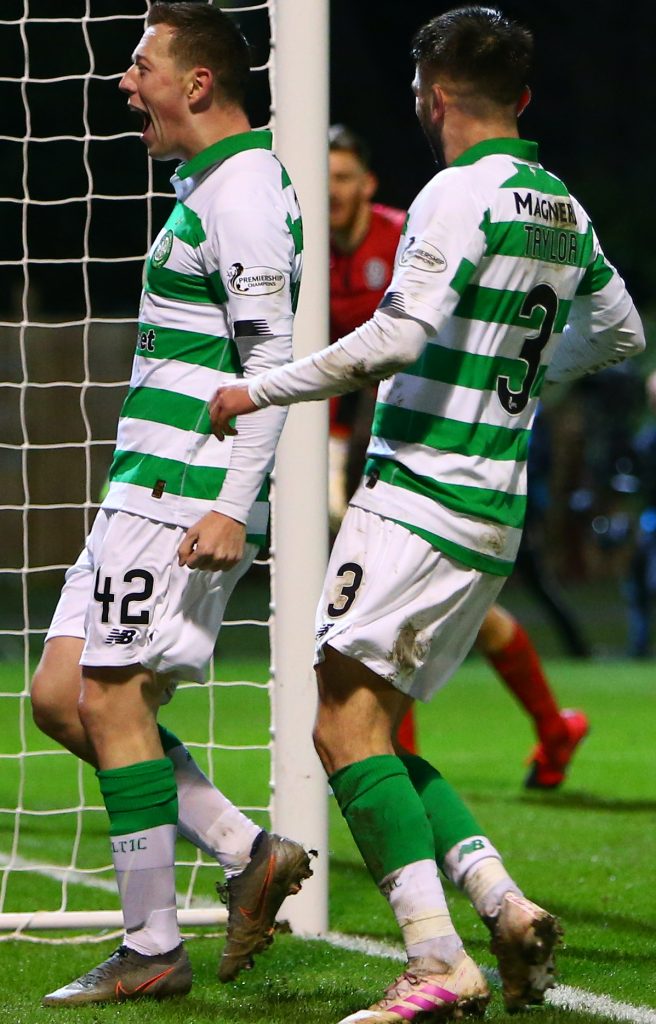 IT TAKES TWO…Greg Taylor joins in the celebrations as Callum McGregor yells in triumph.

The 26-year-old Scotland international was awarded his sixth successive Premiership honour when the SPFL hierarchy made the inevitable decision to award the flag to the team that had set the pace from day one.

McGregor, speaking to Celtic TV, admitted: “It’s incredible to finally get the news. We’ve been waiting for a few weeks for it to happen. It’s a little bit strange that we’re not on the pitch celebrating with the supporters and the rest of the boys because everyone’s worked so hard to achieve it. Nonetheless, it’s an incredible achievement.

“With eight games to go, and 13 points clear, it was all but over, anyway, and everyone in the media was speaking that way. It was almost a done deal. We knew that we were in great form. We know that we’re worthy champions and anyone who tells you any different, I don’t think that’s an honest reflection.

“There was a lot of pressure going into the season, to go and also get that nine-in-a-row – the second time in the club’s history. There was a big weight on the players, the manager as well, the staff, everyone, so to actually do it in the style that we’ve done it in is testament to the way that we play.

“We work hard every single day and we keep getting better, it seems to be, every single year. We’re bringing out these big performances one after another.

“This season, you look at the wins and the points that we racked up – it’s just as good as any other season that we’ve had, so that shows you that we’re always progressing.”

McGregor added: “Coming back from the winter break, I felt even more refreshed and rejuvenated and you could probably see that in my performances.

“I was on a good scoring run and I was feeling good about myself, so to cap off another great season with one Cup, we’ve got the league and, obviously next season we can maybe talk about the Scottish Cup.

“But to win the competitions that we were in was obviously the target and we’ve managed to do that again.”