Celtic Quick News on News Now
You are at:Home»Latest News»CALMAC’S 10-IN-A-ROW PLEDGE
By CQN Magazine on 21st May 2020 Latest News

CALLUM McGREGOR has told Celtic fans he will be at the champions for 10-in-a-row.

And the Scotland international midfielder hopes his old boss Brendan Rodgers will be at Parkhead for the party to celebrate the historic achievement.

McGregor, 26, who agreed a new three-year deal with the Hoops last summer, was an ever-present in the 30 games that saw Neil Lennon’s men push towards title No.9 with a 13-point advantage before football went into lockdown in mid-March due to the coronavirus pandemic.

Asked if he would be around next season in the quest in the quest for double figures, the Glaswegian told the Daily Record: “Absolutely. I am loving my Celtic career and it seems to be going from strength to strength.

“I signed a long-term deal last year. That’s what I wanted, that’s what the club wanted.

“We were desperate to get nine in a row and now we can put all our energy into trying to finish the job.

“That’s the vision the club spoke to me about. That’s where they see Celtic going.

“They want Celtic to be dominant and I want to be part of that. It’s why I pledged my long-term future to the club.

“We have done well to have this period of dominance and we want to continue it.

“We want everybody to stay together and have a go next season. 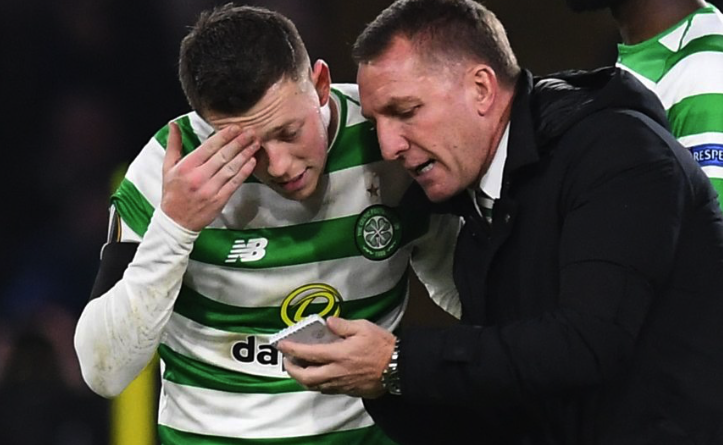 McGregor, of course, was linked with a £25million reunion with Rodgers at Leicester City last year and remarked: “The stuff in the summer was nice to hear – that an ex-manager liked working with you.

“There was speculation and you kinda do have half an eye on that, but you are also just focused on doing your best for Celtic.

“I had a job to do for the club and as soon as I got the contract sorted, I just felt like I went from strength to strength.

“I am very happy at the club and that was very well reciprocated in terms of what the club did for me.

“We showed some good loyalty to each other and I was just desperate to get back to enjoying football.

“My performances, from the moment the contract was sorted, probably kicked on. In the second half of the season, I felt I’d kicked on even more.

“I got the 13 goals to break my Celtic record and I felt really confident that I would push on again.”

McGregor has won six successive championships – two with Ronny Deila, who introduced him to the first team in July 2014, a double with Rodgers and a pair with Neil Lennon.

Hoops fans were massively disappointed when the former Liverpool gaffer quit the club in February 2019 to return south after leading the team to seven successive domestic honours.

However, McGregor insisted: “The nine-in-a-row run is a combination of three managers we have had.

“Brendan, Ronny Deila and the current gaffer have all done incredible things in their own right. Brendan achieved so much for the club.

“Hopefully over time, people can see the influence he had and the role he played in this brilliant run, started off with the gaffer and continued by Ronny.

“To have that much success at a club and for it to be overlooked, just in the heat of the emotion, would be a shame.

“Hopefully, one day they can all come back together and celebrate the success.

“Emotions run high in football, but everyone has been a part of this and, hopefully, that can be appreciated over time.”