CALLUM McGREGOR was 10 years old and still at primary school in Glasgow the last time Celtic won through in a European tie after Christmas.

That triumph came 15 years ago when Alan Thompson volleyed in a close-range winner against mighty Barcelona at Parkhead on March 11 2004. An inspired performance from young goalkeeper David Marshall helped the Hoops to a goalless draw in the Nou Camp.

Martin O’Neill’s men got through to the next stage of the UEFA Cup, but, unfortunately, the run ended against more La Liga opposition in Villarreal who held out for a 1-1 draw in Glasgow before winning 2-0 on home soil.

McGregor is determined to make up for lost time when Brendan Rodgers’ men take on Valencia in the first leg of the Europa League last-32 showdown at Parkhead on Thursday.

The playmaker, who scored his first goal for the club in a Champions League qualifier against KR Reyjkavik in July 2014 during the early days of Ronny Deila’s two-year reign, reckons the champions will be full of confidence when they square up to the Mestalla outfit under the lights in the east end of Glasgow. 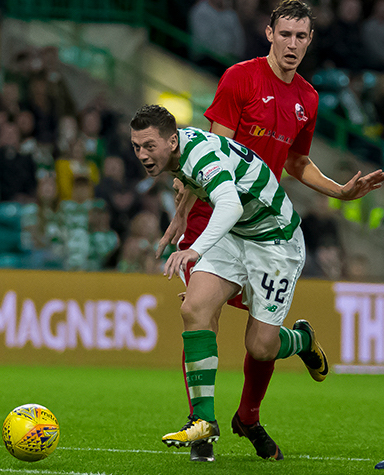 ON THE RUN…Callum McGregor in action in the 3-0 win over FK Suduva in August.

The Scotland international midfielder said: “You know Spanish clubs will play football and they’ll always really test you. They’ve come into a good bit of form recently, but we’ve got to fancy our chances at Celtic Park.

“Our mindset has to be that we play without fear and just go out there and see what we can do.

“It would represent progression for us season after season in Europe.

“These European competitions are really tough, especially when you see the money that clubs are throwing about.

“Then you look at the draw for this round and see the quality of the teams who are in it. The standard is getting higher all the time and you have to go back to 2004 to find the last time we managed to win a knock-out tie.

“We know it’s not going to be easy, but we have to go into it in a positive frame of mind.”

McGregor hopes lessons have been learned from last season when the Hoops were 1-0 ahead against Zenit St Petersburg after the home first leg before falling apart in the return in Russia where they crashed 3-0 in a whimper.

He said: “I think being at home first probably helps us slightly. There’s a feelgood factor about Celtic Park and everybody will be coming to this big European night urging us on to get a result, similar to last season against Zenit.

“Everyone is expecting the best from us, anticipating that we’ll turn in a good performance. I reckon that if we can give a good account of ourselves people will be happy with that.”

McGregor reflected on the 2-1 victory over German big spenders RB Leipzig in November and said: “I think that the night we beat them provided the blueprint for us.

“If we can turn in a similar display against Valencia, we should be all right. It’s about us being upbeat and wanting to push ourselves – then we’ll see what happens. 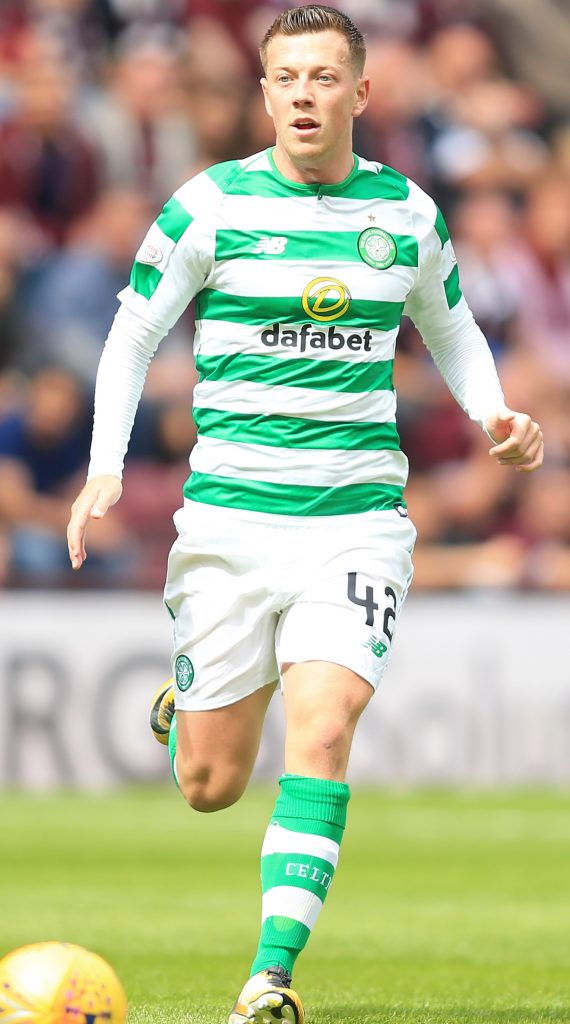 ON THE BALL…playmaker Callum McGregor in familiar pose.

“I watch the bigger games involving Barcelona and Real Madrid and you realise that foreign opponents will be at a high level technically, so we pretty much know what we’ll be coming up against.

“That will help us, too, in that we’re moving up in class, the speed of thought has to improve and you also need to move the ball quicker. Being in that type of environment makes you a better player.

“You could probably say that this is a harder draw than last year’s, but, then again, it’s good to test yourself.

“Having so many young Scottish players in the side, coming up against such strong opposition can only be a good thing for us.

“You want to test yourself against the best and, by doing that, you should come out the other side as a better footballer.”

McGregor added: “I think we’re going well, to be fair. We’ve been excellent since we returned from the winter break, winning every game and not conceding a goal.

“Everything is going well and the new boys who have come in have made a contribution.

“There are a lot of players who would be considered automatic starters who can’t be in the team at the moment. Injuries apart, that’s a tribute to the strength of our squad and the guys who have come in.

“They have been desperate to do well and they’ve maintained our standards.”