Celtic Quick News on News Now
You are at:Home»Latest News»CALMAC’S A FAN OF THE FAST SHOW
By CQN Magazine on 9th November 2018 Latest News

CALLUM McGREGOR praised the quick-thinking of his team-mates in the 2-1 Europa League Group B triumph over RB Leipzig at an enthralled Parkhead last night.

The Hoops were rocked when Jean-Kevin Augustin, booked in the first-half for an over-zealous challenge on the courageous Craig Gordon, was presented with a free header to nod in the equaliser in the 77th minute.

Four minutes earlier, Brendan Rodgers’ men had been denied of going 2-0 ahead when a clever piece of interplay between James Forrest and Odsonne Edouard allowed the £9million Frenchman the opportunity to slide in an effort that was goalbound until it clipped the foot of sprawling keeper Yvon Mvogo and trundled wide of the far upright.

However, following the leveller, Celtic’s response was simply awesome as they swept down the pitch straight after the restart and this time the former Paris Saint-German youngster couldn’t miss after being set up by a superb left-wing cross from Ryan Christie. 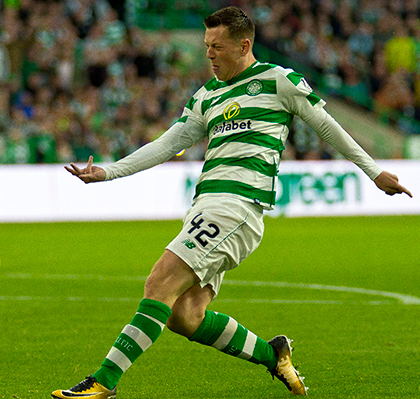 BY THE LEFT…Callum McGregor has a pop at goal.

McGregor, who has been filling in the midfield anchor role in the absence of crocked skipper Scott Brown, said: “I think the first goal gave us great belief that we could go on and win. Under pressure, we were excellent and we counter-attacked well.

“Teams are always vulnerable when they score, so it was important to get forward as soon as possible and the goal again gave us the belief to see it out.

“That’ll give us confidence, we’ve been looking for that big victory and, hopefully, that will spur us on now.”

Celtic can match leaders RB Salzburg’s 12 points if they win their next section encounters against Rosenborg and the Austrians.

RB Leipzig can also match that tally if they, too, beat the same opposition in their last two games.

But Celtic’s relentless spirit has given them the opportunity to cement a place in Europe after the turn of the year.