CALLUM McGREGOR has insisted it’s no fluke Celtic have not lost a solitary Cup-tie since Brendan Rodgers took over as manager on May 2016.

The Hoops have won three League Cups in that period and they now have their eyes on a hat-trick of Scottish Cups as they bid for an unprecedented treble treble.

St Johnstone will provide the opposition at Parkhead on Sunday in the fifth round of the national competition and McGregor, who made his 50th appearance of the season for club and country in the 2-0 win over Hibs in midweek, reckons the holders must maintain perfect form if they hope to clear the latest hurdle.

The Scotland international midfielder said: “It’s another test for us. We’re starting to get to know what they’re all about it, but it’s a case of us doing what we normally do and getting through. 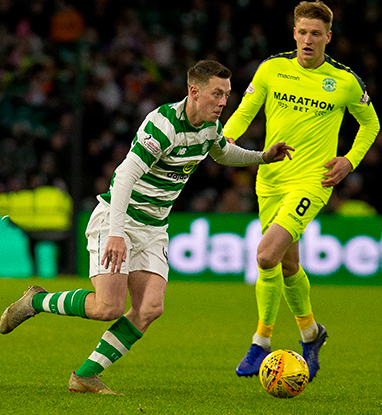 ON THE BALL…Callum McGregor in action against Hibs.

“When they played at Celtic Park, they sat low and then through there, they came at is. It’s a bit of cat-and-mouse in terms of the tactics of the game, but we’ve got to play our normal game and, hopefully, get the win.

“We’ve got to be perfect to get through and I think that’s keeping us focused. In Cup games you’ve got to turn up with the right attitude and produce when it counts. I think we’ve been good at that over the last few years.

“It’s not a fluke. We prepare well for these games and we’ve always turned up for the big games. For us, it’s more of the same, that patient build-up.

“I think our perfect home record is down to the performance, concentration and preparation for each game. It’s a case of working hard every day and taking that into each game.

“This part of the season is always exciting, and this is where all the players want to be back fit and helping out the team.”

A goal from Leigh Griffiths gave the Hoops victory over Tommy Wright’s men in a tense Betfred League Cup encounter at McDiarmid Park earlier in the season.

Sunday’s game will be the third confrontation between the side in the past two days with Rodgers’ outfit winning the previous two 2-0 on both occasions.