Celtic Quick News on News Now
You are at:Home»Latest News»CARRY ON SCORING: DIXIE BACKS GRIFF
By CQN Magazine on 7th May 2020 Latest News

The Hoops hitman has netted eight goals in 2020 to hoist his tally to 115 and requires just three more to overtake Bobby Collins in 20th place.

Dixie Deans struck 124 times during his five years at the club after arriving from Motherwell in the 1970s and accepts the 29-year-old Scotland international could soon pass that.

The chunky hitman is still revered for two Cup Final hat-tricks in Celtic successes over Hibs in the Scottish Cup in 1972 when the Parkhead men triumphed 6-1 and repeated the feat in the 6-3 win in the 1974 League Cup.

Deans, speaking to the Scottish Sun, said: “I remember when Leigh got his 100th goal and I was so pleased for him.

“I’m proud to be on the list of players who have a century of goals and more, but it’s rare for it to happen now.

“Big John Hartson was the last to do it before Leigh. That shows how big an achievement it is. 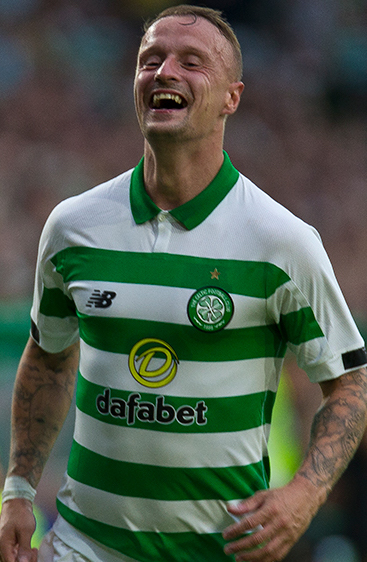 LAUGHING BHOY…Leigh Griffiths is all smiles after scoring this season.

“There have been a lot of good Celtic strikers over the last decade, but most only stay for a few years. That’s modern football. Players come and go. Big bids arrive and they move on.

“But Leigh has been there for six years now and he also has a long-term contract.

“He’s on 115 goals and what’s to stop him scoring a lot more over the next three or four years?

“Good on the boy. I am really happy for him and I hope he goes even higher up that list.

“I have no doubt he will add to that tally and find his name among all the great strikers.”

Griffiths hit goal No 100 with a trademark free-kick in a 3-1 European victory over FK Sudova at Parkhead on August 2018, but, of course, the season ended prematurely due to personal problems.

The player’s career was clearly at the crossroads by the time the mid-winter break arrived, but he returned with renewed vim and vigour and fired in a hat-trick in the 5-0 win over St Mirren before the game went into lockdown during the coronavirus outbreak. 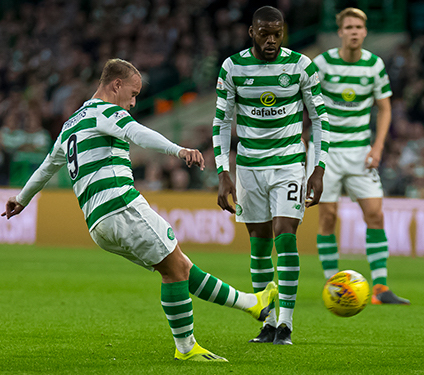 TON-UP BHOY…Leigh Griffiths sweeps in a free-kick to notch his 100th goal for the Hoops in August 2018.

Deans continued: “Leigh has been through a lot over the last 18 months. It’s been a tough time for him.

“There will have been people saying he was probably finished at Celtic. He had been out of the team for a few months and things weren’t looking great for him.

“But he got the head down and proved the critics wrong. He worked hard and got the rewards and seeing the way he was playing in the first few months of 2020 was brilliant.

“Credit to the manager, Neil Lennon, for changing his system and getting two strikers into the team. Most play with just one forward now and in Odsonne Edouard Celtic have a special talent.

“But I think having Griffiths alongside him shares a lot of the responsibility and that helps. Celtic were playing well in the first half of the season, but they stepped it up after the break.

“They were scoring goals and playing really good football and Leigh was at the heart of it all.”

Deans, now a sprightly 73 year old, added: “I have always been a big fan of Leigh, even going back to his Hibs days. 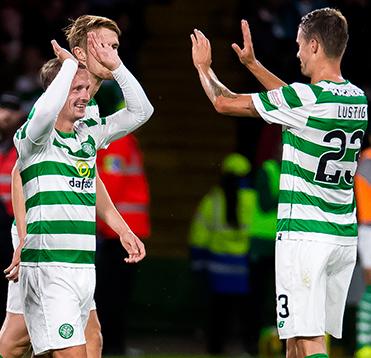 HANDS UP IF YOU LIKE SCORING GOALS…Leigh Griffiths is congratulated by Mikael Lustig after netting the 100th strike against FK Sudova.

“I like strikers who are a bit off the cuff and he is a bit of a throwback to a different era. Leigh is never afraid to try things. If a shot is on from 35 yards, he will have a go.

“His corners and free-kicks are strong, too, and I just think Celtic are more dangerous when he’s in the team. He also seems to come alive in big games and that shouldn’t be taken for granted.

“It’s not easy to handle the pressure of being a Celtic striker. You’re always expected to deliver.

“But he seems to thrive off that and his return has been a huge bonus from this season.”