Celtic Quick News on News Now
You are at:Home»Latest News»CASHING IN: POSTECOGLOU’S EURO PLUS
By CQN Magazine on 23rd May 2022 Latest News

ANGE POSTECOGLOU will avoid Celtic’s “running circus” as he prepares to delve into the market for his third transfer window.

The Hoops boss has brought in 17 players since his June arrival and has identified areas in the squad that required strengthening, as CQN reported earlier this month.

The Greek-Australian has escaped being pitched into the frenzy of attempting to bring in recruits in time for European competition qualifiers with the 2021/22 ttitle winners going straight into the Champions League group stages in the upcoming campaign.

Last year, Postecoglou arrived in Scotland on June 23 – thirteen days after the announcement of his appointment as Neil Lennon’s successor – and faced his first competitive game against FC Midtjylland at Parkhead on July 20.

OOPS…Vasilis Barkas allows a free-kick from Brazilian Evander to float into the net for FC Midtjylland’s equaliser at Parkhead in July. Dane Muray and Anthony Ralston look on.

Celtic completed the game with rookie Dane Murray accompanying Stephen Welsh in central defence following Nir Bitton’s red card just before the interval. The hosts were leading 1-0 with a debut goal from £3.5million Israeli new Bhoy Liel Abada at the time and the winger was sacrificed as the manager was forced to reorganise his back lot.

Vasilis Barkas blundered to gift the Danes the equaliser and, after Scott Bain took over in the 2-1 extra-time loss in the return leg, Postecoglou had the opportunity to bring in Joe Hart in a £1million switch from Spurs at the beginning of August to solve his No.1 problem.

Striker Kyogo Furuhashi, the £4.6million signing from Vissel Kobe, and centre-back Carl Starfelt, bought for £4.2million from Rubin Kazan, were signed too late for the qualifiers for the money-spinning latter stages in Europe’s elite competition. 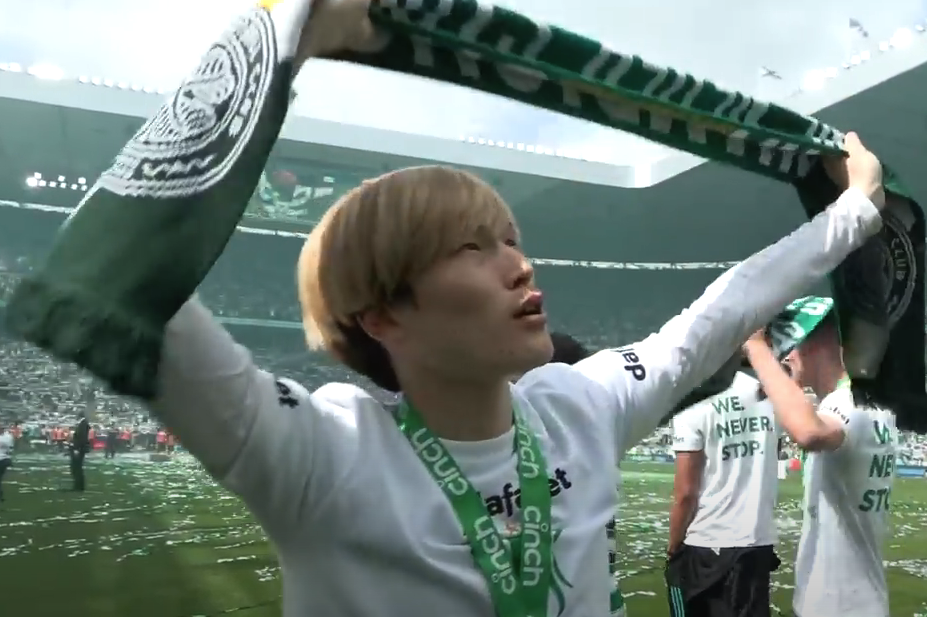 SCARF ACE…Kyogo Furuhashi, scorer of 20 goals, celebrates after the 6-0 win over Motherwell last weekend with the title coming back to Paradise for the tenth time in 11 years.

There will be no such worries for the Parkhead gaffer this summer.

That particular problem has passed across the city to Giovanni van Bronckhorst and former Celtic midfielder Kris Commons, writing in his Daily Mail column, stated: “Rangers can’t afford to sit and twiddle their thumbs.

“When it comes to the Champions League qualifiers, they only need to look at what Celtic did over a number of years.

“Almost every season without fail, you had all this uncertainty around key players in terms of hanging around to wait and see if the club managed to reach the group stage.

“Celtic became notoriously slow with getting their transfer business done every summer. It became a running circus year after year that they would go into the European qualifiers with a half-baked squad.

SING WHEN YOU’RE WINNING…Filipe Jota joins in the festivities at Celtic Park on Flag Day.

“They would then go and make some panic buys late in the window – Shane Duffy, Diego Laxalt, Albian Ajeti – to try and save face.

“This is where the likes of sporting director Ross Wilson has to earn his money for Rangers. As soon as the final whistle was blown at Hampden on Saturday, he had to turn his focus on to the inevitable rebuild.”

It’s a plus for Postecoglou whose priority targets are Cameron Carter-Vickers and Filipe Jota who impressed during their season-long loans from Spurs and Benfica respectively.

The option-to-buy in the players’ temporary contracts will mean an intial outlay of £12.5million which will soar with add-ons, but reports indicate sell-on percentages and suchlike will NOT be deal breakers.

If all goes well, the boss will have the time to look at the market place without being forced to pay over the odds.

DOWN AND OUT…misfiring Albian Ajeti could be heading for the Celtic exit in the summer.

Greek misfit Barkas cost £4.5million when he arrived from AEK Athens in the summer of 2020 when the Hoops were caught out with Fraser Forster’s u-turn to remain at parent club Southampton. Craig Gordon had already been allowed to rejoin Hearts at the end of his contract.

Basically, Celtic squandered £9.5million in panic buying to bolster their squad at the last minute.