ON-LOAN Mohamed Elyounoussi has revealed he has not been dwelling on his future with his second stint at Celtic is due to end in June.

The Norwegian international left-sided raider is likely to return to Southampton, but he admitted he still has some unfinished business at the Hoops.

The bid for the historic tenth successive title is blown after an inexplicable campaign of wretched results and dire performances, but the Scottish Cup is on the horizon with a tie due against Arbroath or Falkirk next month.

The Parkhead men have claimed the national trophy for a record-breaking four consecutive years and the 26-year-old forward is eager to play his part.

Elyounoussi said: “I haven’t thought about my future too much, my main focus is to work hard a training and on the pitch.

“The season isn’t finished and my main focus is to stay here and try and win games at the club. I’m here every day to do my best at training and to get better on the pitch. 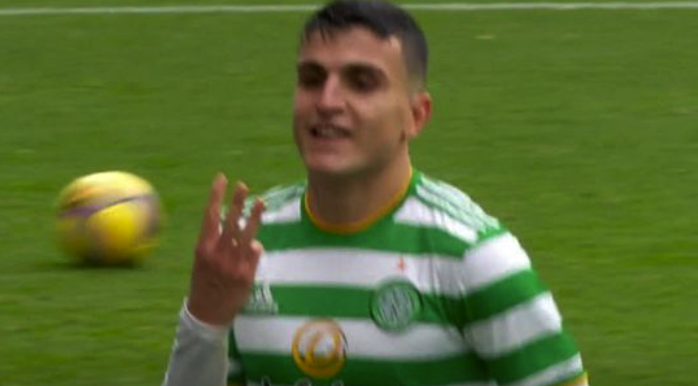 DIDN’T HE DO WELL…Mohamed Elyounoussi celebrates his stunning hat-trick against Motherwell at Fir Park in November.

“In the end, everyone is playing for pride on the pitch. No-one likes to lose and drop points. We’re playing for a club, for a lot of fans and we go into every game to try and do our best and to try to win and to improve. We only ever focus on ourselves.”

Elyounoussi, who was brought to the club by former boss Neil Lennon, praised interim gaffer John Kennedy as the club prepare for the visit to Tanadice for tomorrow’s Premiership encounter with Dundee United in the High Noon showdown.

The player, speaking to the Celtic website, added: “I wouldn’t say much has changed at training. We still work hard on the training pitch, Kendo has been doing a really good job. There’s a lot of positivity and the boys are smiling again after a period of uncertainty.

“He’s not changed much, he’s coming in with his idea for new things, but not much. We’ve had a good week of training and we’re looking forward to the game on Sunday.

“Winning the remaining games is our goal and we take it from there. We can always improve and learn from the past and improve for the next one.”