LEWIS MORGAN has already been linked with a January loan switch to Hibs to play for a THIRD time under Jack Ross.

The new Easter Road boss, who was appointed last week to take over from the sacked Paul Heckingbottom, managed the winger at St Mirren and Sunderland.

Morgan admitted he sent a text to congratulate Ross on landing the job at the Edinburgh side, but insisted he is only focused on winning a place in Neil Lennon’s first team.

The tricky raider, speaking to the Daily Record, said: “I know people have mentioned it, but he hasn’t! I just texted him to wish him well.

“He replied, but that was it. I am just concentrating on working hard at Celtic.

“I know I haven’t played as much, so I was delighted to get called up by the gaffer for the Scotland squad and it’s about trying to impress in training.

“I just want to keep trying to improve at club and Scotland level.

“It’s been brilliant at Celtic and the boys have been playing brilliantly. Obviously, its frustrating, no player is happy when they are not playing.

“But all I can do it work hard and try to impress the manager and be ready for when I get the chance to prove myself.” 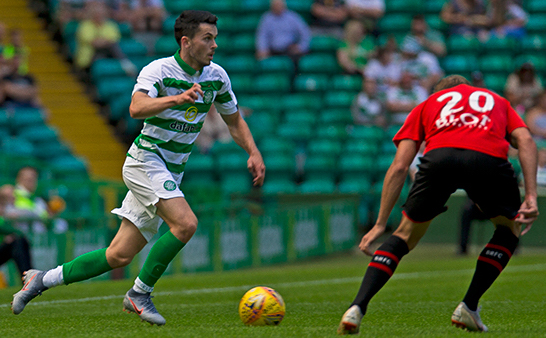 Morgan, who has made 13 appearances for the Hoops this season, was on the substitutes’ bench during Saturday’s 2-1 win over Cyprus in Nicosia – where team-mate Ryan Christie claimed his first strike for his country – and is hoping for a chance to show what he can do against Kazakhstan at Hampden tomorrow night.

He added: “The double headers are tough and the manager is going to need everyone. It’s been good to be away and part of it and I’ll be ready if the manager needs me.

“It’s the same with Celtic. You look at the run of fixtures and there are a lot of games from now until Christmas and everyone will need to play their part.

“There games always come thick and fast with Celtic and you need to ready. I want to feature as much as possible and maybe get more minutes than I have recently.

Morgan was signed by ex-boss Brendan Rodgers for £300,000 from the Paisley side in January last year and was immediately loaned back to the team to help in their successful promotion push.

He also spent some time on Wearside in another temporary switch last season while Ross was in charge of the English League One outfit.

However, it’s all about proving himself at the champions this time out.