CELTIC missed the opportunity to go TEN points clear at the top of the Premiership, but will just have to be content with eight of an advantage as they zero in one an eighth successive championship.

It wasn’t the second homecoming anyone had planned for Neil Lennon this afternoon, but Aberdeen arrived in the east end of Glasgow fully intent on spoiling the party.

And they managed that with a typical dour display of cat-and-mouse.

The Hoops didn’t create too many opportunities on an frustrating day and when they did get anything on target Joe Lewis was up to the task.

So, unfortunately, the Hoops’ 100 per cent domestic record at Parkhead ended against the Pittodrie men. It also stalled Lennon’s winning sequence after victories over Hearts and Hibs in Edinburgh. 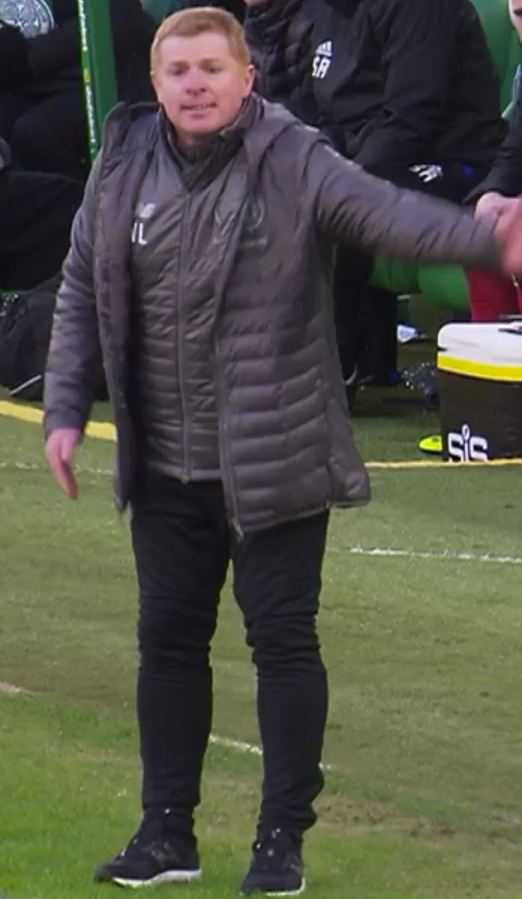 FRUSTRATED…Neil Lennon urges on his players against the Dons.

Derek McInnes is an advocate of man-marking, so it was no surprise to see left-back Max Lowe immediately taking over the shadowing duties of James Forrest who has scored the breakthrough goals in the previous wins at Tynecastle and Easter Road.

In the 13th minute, Oliver Burke earned a round of applause with his energetic running as he closed down a passback to Joe Lewis with the keeper enjoying a little bit of fortune with a rushed clearance that cannoned off the on-loan Celt for a goal-kick.

Moments later, Dedryck Boyata was heavy with a ball forward to Scott Sinclair and the chance was gone.

In the 24th minute, Kristoffer Ajer sent Sinclair running clear and he attempted to play in Forrest, but a defender spotted the danger and got in quickly to clear at the expense of a corner-kick.

Henderson’s right-wing deadball effort was headed wide by Boyata from a reasonable position six yards out.

Kieran Tierney had Greg Stewart for company for most of the game as he attempted to drive down the flank.

On the half-hour mark, Ajer was denied the barrier-breaking goal with a breathtaking diving save from Lewis.

Space opened up for the Norwegian as he drifted in from the left onto his right foot and he fired in a ferocious 20-yarder that looked as though it was heading for the bottom corner.

The giant shotstopper, however, had other ideas as he swooped full-length to get his fingertips to the ball to edge it wide of the right-hand upright. 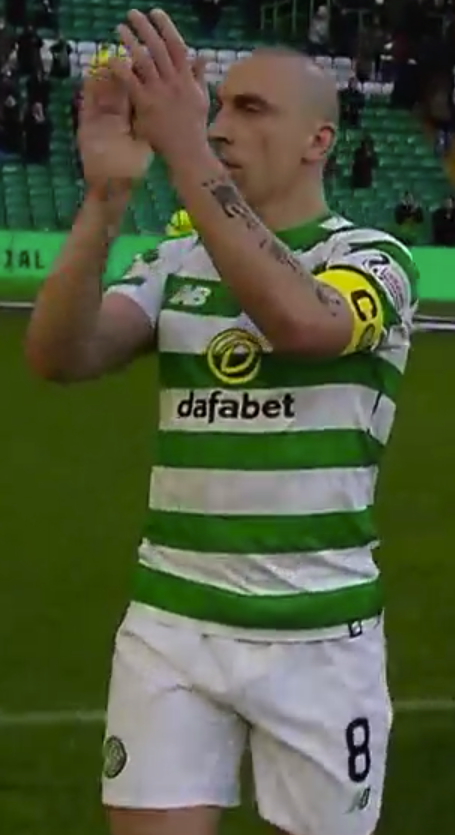 A BIG HAND…skipper Scott Brown salutes the fans after the goalless stalemate.

Henderson worked a nice one-two with Jeremy Toljan before curling over a cross to the far post, but Dom Ball headed clear for the Hoops’ eighth corner-kick.

In the 40th minute, referee Craig Thomson provoked the ire of the home fans with a bewildering booking of Boyata for a challenge on James Wilson. It was doubtful it was a foul, but it certainly was not worthy of a yellow card.

All eyes were then on the match official to see if there would be a consistency in his decision-making. Alas, there wasn’t.

Just before the interval, Ajer had the ball in the net with a rocket-like header following a deep free-kick from Henderson, but, unfortunately, the central defender had strayed just offside.

It was tight, but looked like the correct decision.

It was a frustrated set of players who headed for the dressing room at the interval  with Scott Bain missing the opportunity to catch up with some reading.

The Dons showed absolutely no intention in contributing to the entertainment factor which, as ever, put the onus on the Hoops to do all the hard work. 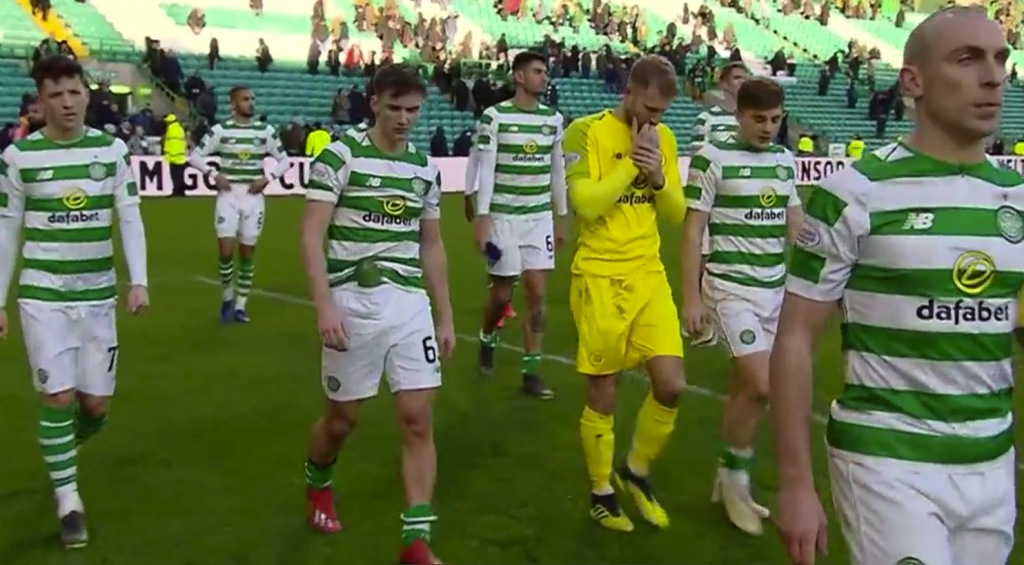 DEJECTION… there is no disguising the mood of the Celtic players as they come off the Parkhead pitch following the scoreless stalemate, led by skipper Scottt Brown.

Lennon made changes for the start of the second-half with Mikey Johnston and Odsonne Edouard replacing Sinclair and Henderson as he freshened up the formation and injected a bit more pace into the team.

Dean Campbell was fortunate to escape a yellow card from ref Thomson after a high challenge that left Tierney writhing on the ground.

In the 52nd minute, Bain had to deal with his first shot when he looked lively to get down at his left-hand post to block an effort after his defenders were caught dithering.

The Dons looked more adventurous in the second period and Boyata’s positioning and anticipation had to be spot-on as he repelled a couple of raids.

In the 58th minute, Toljan came forward and slipped in Edouard who twisted and turned to open up an opportunity, but Lewis narrowed the angle and the Frenchman’s blast was blocked.

Thomson continued to baffle with some erratic decisions and he brought howls of derision from the stands when he awarded the Dons a goal-kick when it was clear Burke had forced a corner-kick off Lowe.

Toljan made a timely intervention to deflect a drive from Graeme Shinnie over the bar as the Pittodrie visitors made another rare foray into attack.

Stewart was at last booked for an off-the-ball foul on Tierney as the champions rolled forward.

In the 78th minute, Timothy Weah came on for Burke as the Hoops went for the victory.

The 18-year-old American was given a warm welcome to proceedings when Lewis Ferguson recklessly charged him to the ground. Celtic got the free-kick and the Dons midfielder escaped censure.

In the 86th minute, Johnston swept away from Ball inside the box on the left, but his low pass was missed by Weah at the near post.

Moments later, Nir Bitton set up up Johnston, but his attempt was far, wide and anything but handsome.

In the 89th minute, the ref awarded the Dons a free-kick after a touch from Brown on Sam Cosgrove and Bain was called upon to push Ferguson’s 20-yard effort to safety.

A frustrating game ended goalless and it must be hoped this is a point gained and not two dropped at the end of the day.