INTERIM manager John Kennedy watched his first-ever Celtic line-up win in an action replay of the result against Aberdeen 10 days ago.

The bosses may have changed with Neil Lennon’s midweek departure, but the scoreline remained identical at Parkhead this afternoon.

David Turnbull was the matchwinner last week and this time it was Odsonne Edouard with a deflected effort.

It was a game where the team were the usual mixture of the wonderful and woeful as they ended the confrontation hanging onto the early effort from the French ace.

Kennedy’s first order when the players get back to Lennoxtown must be to go through rigorous shooting practice exercises. Their attempts on goal in this encounter were dreadful.

Inside five minutes, there was a double scare for the champions when once again their inability to deal with crossballs was highlighted.

Andy Considine towered above the Hoops rearguard to get his head to a right-wing corner-kick and his looping header struck the angle of bar and post and ricocheted back into play.

It was sent once more into the mix by Niall McGinn and this time it was Ash Taylor who outjumped friend and foe to flash in a header that was rocketing into the roof of the net until Scott Bain catapulted athletically to push the effort over the crossbar.

HELPLESS… Aberdeen keeper Joe Lewis is caught going the wrong way as Odsonne Edouard’s shot is deflected for the winner. 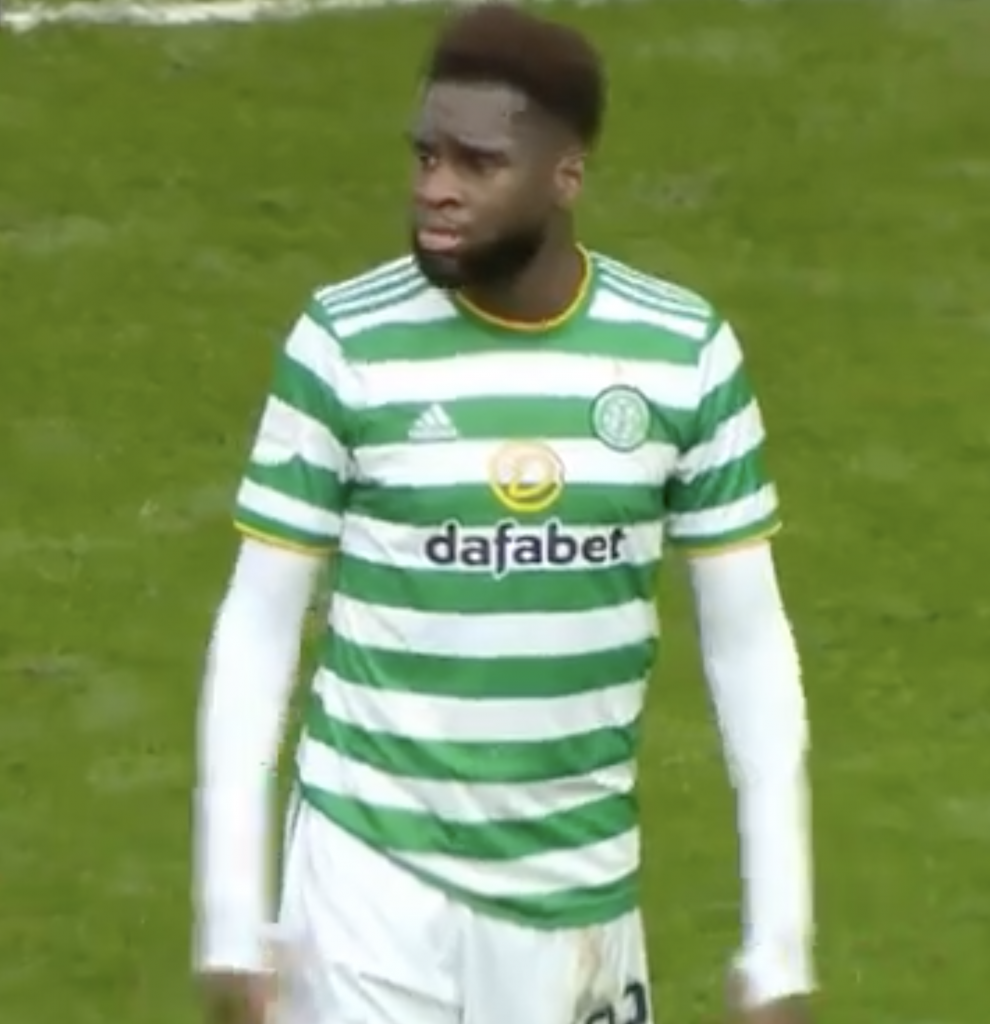 WHY SO GLUM, CHUM? Odsonne Edouard has just netted the points-clincher, but can’t crack a smile.

Three minutes later, Celtic were in the lead. Ryan Christie spurted forward coming in from the right before picking out the unmarked Odsonne Edouard on the edge of the box. The 20-goal hitman didn’t hesitate as he struck the ball goalward and it looked as though it would be gathered by Joe Lewis before it took a nick off Tommie Hoban and deflected into the opposite corner.

The Dons were out of luck on that occasion, but they had a massive slice of good fortune in the 20th minute when Patryk Klimala had a horrendous miss smack in front of goal.

The Polish striker, making a surprise return to the first team. only had to put a toe on a scorching right-wing cross from Jonjoe Kenny to score, but, remarkably, sliced the ball hopelessly off target and ended on his  back a couple of yards from the line as his mis-hit effort bounced beyond the far post. It was a wretched error.

Lewis had been kept busy in the opening half-hour and had done well to bundle a close-range left-foot drive from David Turnbull round his right-hand post and then parried an effort from Callum McGregor as Celtic searched for a second goal.

Edouard and Diego Laxalt combined superbly in a flowing move on the left and the on-loan AC Milan defender sent in a probing low cross, but Klimala looked slow to react and the ball was knocked wide for a corner-kick. 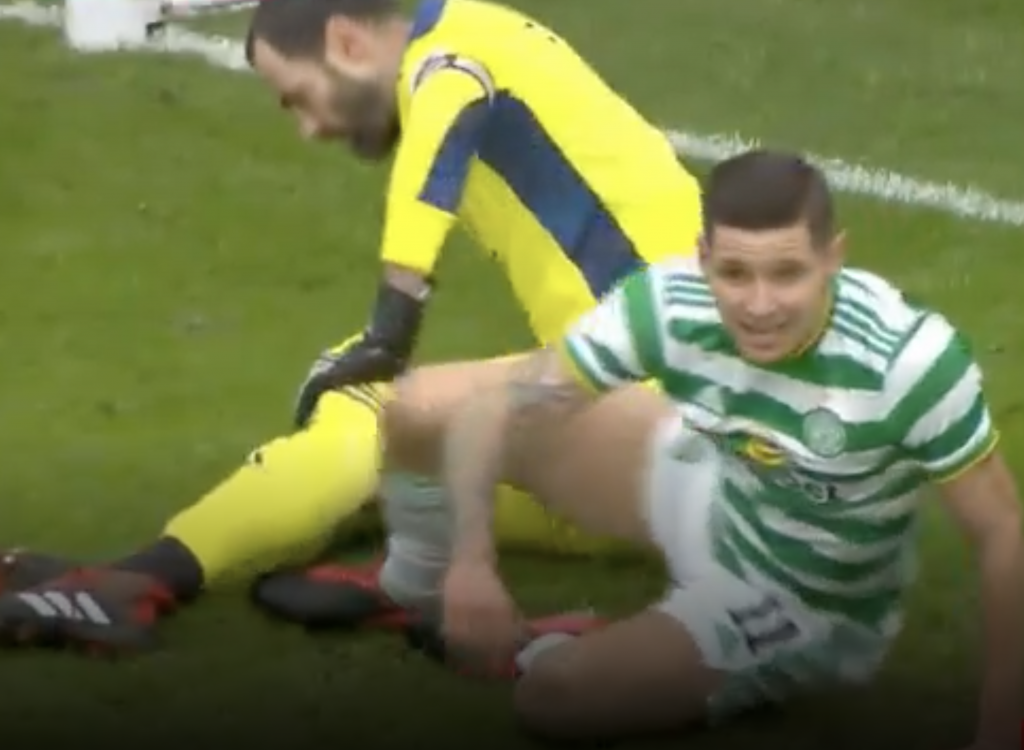 Christie was next up to have a go when he first-timed a vicious left-foot shot from 25 yards that zipped over the bar with Lewis relieved.

In the middle of the park, Scott Brown looked in control as he dictated the pace of the game with McGregor an enterprising ally.

Laxalt was playing virtually as an out-and-out left-winger to put pressure on the right-hand side of the visitors’ rearguard and Kenny, on the opposite flank, looked comfortable, too, as he surged forward at every opportunity.

Kristoffer Ajer was imperious as he strolled around at the back and in midfield, Stephen Welsh was calm and composed and the Hoops were clearly the superior team without turning their possession into goals which has been a recurring theme in a season to forget.

The Hoops still struggled to double their advantage and allowed the Dons the opportunity to come forward and there was a flash of menace when Flo Kamberi thumped one wide of Bian’s left-hand post after a nice move down the right wing before Dean Campbell whipped in a cross at the near post.

In the 65th minute, Kennedy made the expected change when he took off the toiling Klimala and replaced him with Mohamed Elyounoussi.

McGinn tricked McGregor twice on the right before sending over an inviting left-foot cross, but Considine’s low eight-yard effort was booted clear by the alert Ajer. 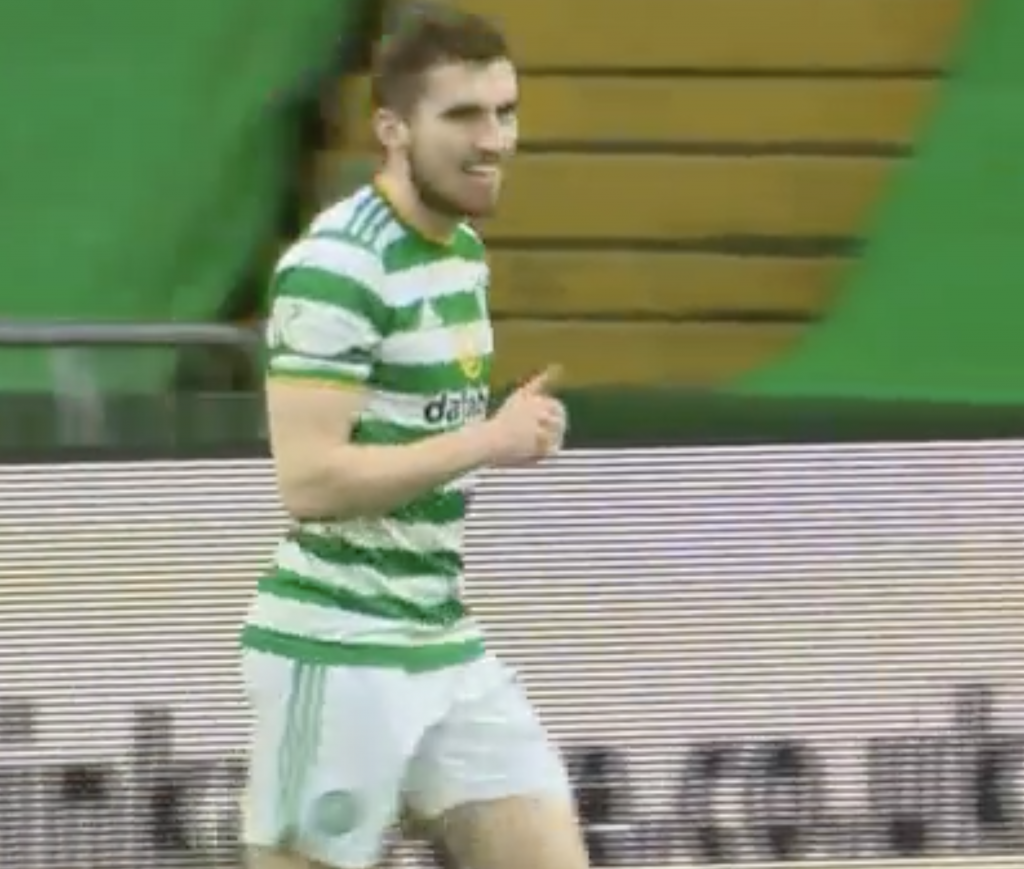 THUMBS UP…Jonjoe Kenny had an excellent 90 minutes for the Hoops.

Celtic began to look ragged as Dons pushed forward in search of the equaliser and far too many passes were going astray, a situation that was highlighted by a ball forward from McGregor that was not within 30 yards of a team-mate. It was quickly returned  and the Hoops were on the back-foot again.

In the 78th minute, Imaila Soro came on for Turnbull as Kennedy looked to ensure his team reclaimed control of the midfield.

Seven minutes later, Elyounoussi had a left-wing cross blocked by Hoban and the ball looked as though it struck the defender’s arm, but referee Willie Collum, with a good view of the incident, waved play on. As the more astute football analysts say, we’ve seen them given.

McGregor blazed wide from 18 yards after a great pass from Kenny for another horrible miss. It must be said Celtic’s finishing in this match was nothing short of appalling.

It’s a win with some anxious moments when the points should have been in the bag.

Edouard then footered and fumbled when he was clean through in the fading moments and, typically, the chance was wasted.