DAVID TURNBULL was Celtic’s matchwinner with a glorious strike that propelled the side to a fifth successive win against stubborn Aberdeen at Parkhead tonight.

It also took the impressive midfielder’s goal tally to the magnificent seven since he made his breakthrough against Lille in December.

After a bout of sparring, the Hoops opened the scoring in th 15th minute with a thunderbolt from Turnbull. Callum McGregor helped to set it up with a strong run on the left and a neat pass in front of the stylish midfielder about 25 yards out.

The youngster took aim before lashing a wicked low drive beyond the frantically-diving Joe Lewis at his right-hand post.

It was an absolute belter from the Scotland under-21 international midfielder who is developing a nice habit of claiming memorable goals.

Celtic were in control, but the Dons showed they could be dangerous on the break and Florian Kamberi tested Scott Bain with a low drive from outside the box and Ismaila Soro stepped in to rescue Kristoffer Ajer after the Norwegian had been beaten in a race by Fraser Hornby.

McGregor then clattered one just wide of Lewis’ right-hand upright after first-timing a clearance from Lewis Ferguson from 25 yards. The opposing keeper breathed a massive sigh of relief as the ball whizzed about a foot off target.

In the 40th minute there was a scare for the Hoops when Kamberi thundered in a blistering right-foot shot from well outside the box that eluded Bain, but thumped against the right-hand post and rebounded to safety. It was a reminder to the champions they were in a contest and a one-goal advantage is never a safe margin.

Four minutes later, Odsonne Edouard was denied by a flying save from Lewis when he cut in from the left to attempt a right-foot drive towards the far corner. The keeper spread himself to push the ball to safety. 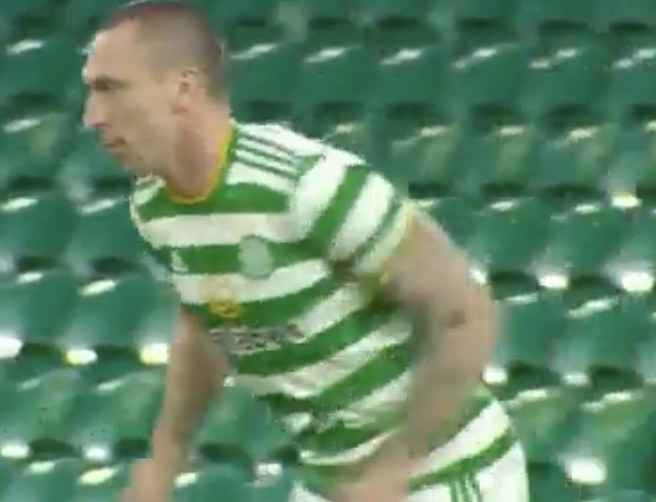 ACTION MAN…Scott Brown races on as a 72nd-minute substitute.

In first-half stoppage time, Turnbull worked a swift one-two with Edouard before flashing a low attempt past the scrambling Lewis at his right. Unfortunately, the ball carried just wide.

McGregor raced away from Ross McCrorie into the box on the left in the 54th minute to set up a chance for Turnbull, but his whiplash effort from eight yards was blocked by a defender and booted clear.

Tom Rogic was introduced for the lacklustre and fairly anonymous Albian Ajeti in the 62nd minute as Neil Lennon was forced to shake it up to get control of the game again. The Australian went into midfield with Ryan Christie moving into a more advanced role.

Scott Brown came on in the 72nd minute to add a bit more composure to the Hoops who had lost their way a little. Soro, who had been playing well, made the way for the skipper. 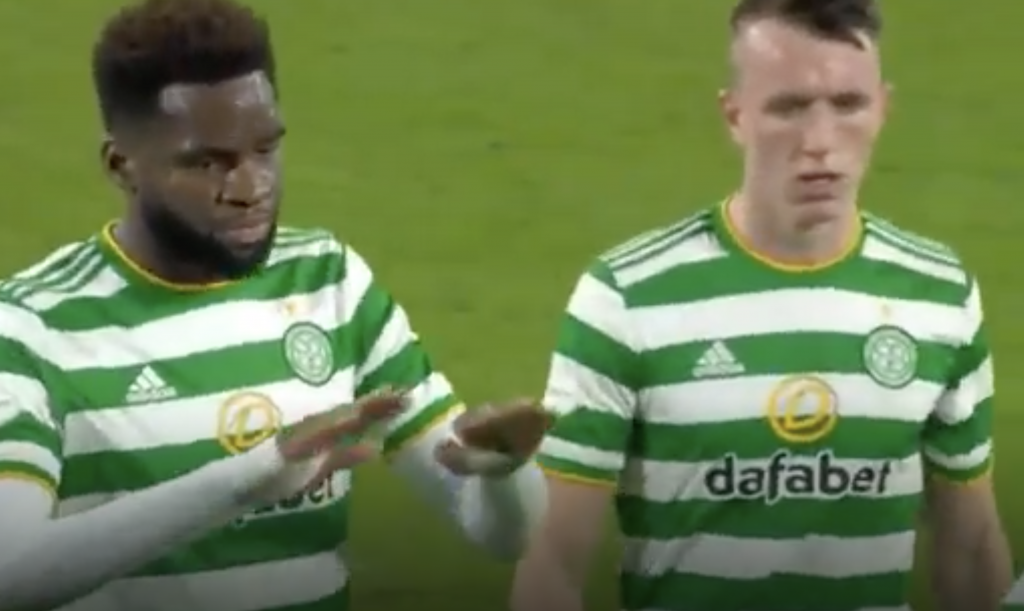 GRAND FINALE…Odsonne Edouard and David Turnbull some off late in the game.

In the 80th minute, Edouard tried to nutmeg Andy Considine when he might have been better to go for a first-time strike and the chance was gone.

Within 60 seconds, the Frenchman came off alongside Turnbull with Patryk Klimala and Mohamed Elyounoussi coming on.

In the 89th minute, Klimala had the chance to kill off the game when he was left with just the keeper to beat, but hit the ball off the outrushing Lewis. A bit more composure from the Pole would have got the job done.

Now it’s all eyes on Dingwall on Sunday for the 7.30pm encounter against Ross County with a sixth consecutive victory the goal for Neil Lennon and his players.