CELTIC knocked on wood THREE times as luck deserted them in this frustrating stalemate against Dundee United at Parkhead this afternoon.

David Turnbull thumped one off the crossbar just before the interval and four minutes from the end Tom Rogic suffered a similar fate with a header.

In stoppage time, Filipe Jota cut in and walloped a devastating shot over the keeper and this time the ball whacked off the top of the woodwork as it bounced away.

Liel Abada was the marksman, but his effort was cancelled within two minutes after some slack defensive play.

The Hoops have now dropped ELEVEN Premiership points in their first seven games and that was not part of the script when Ange Postecoglou arrived in June. 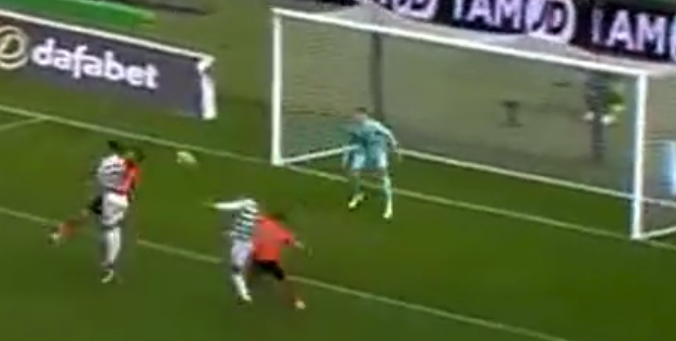 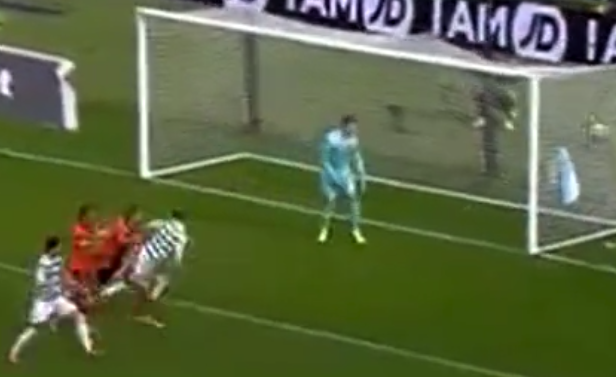 UP…Abada watches his header hit the net with the keeper stranded. 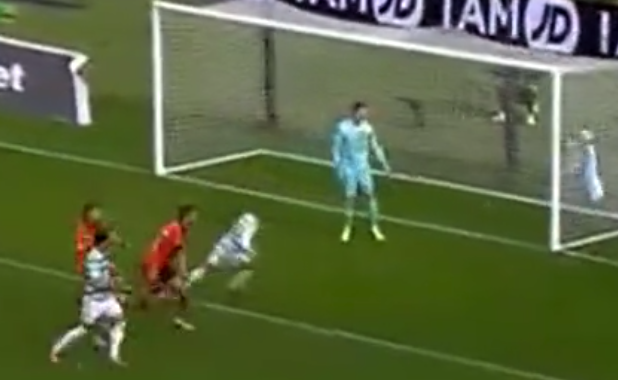 AND AWAY…Abada takes off as Benjemin Siegrist looks at the back of his net. 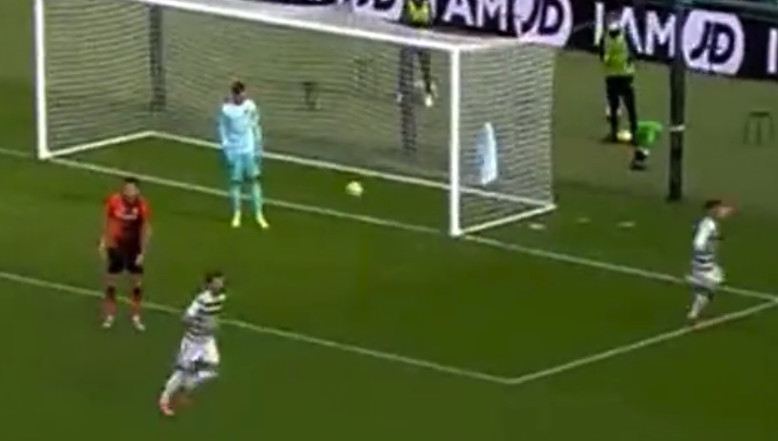 CELEBRATIONS…Abada races to the Celtic fans with Albian Ajeti about to join him.

In the sixth minute, Anthony Ralston raced clear on the right to thump over a cross, but Albian Ajeti thundered the ball over the crossbar from six yards.

Three minutes later, Josip Juranovic, supporting the attack, fired in a vicious 25-yard drive which was punched away by Benjamin Siergrist and Rogic’s follow-up shot was blocked by a desperate defender.

James McCarthy gave the Hoops a fright with a misguided headed backpass to Joe Hart that fell to Nicky Clark, but Ralston got back to clear the danger.

McCarthy was then on the receiving end of a wayward challenge from Jeando Fuchs that saw the United player booked by referee Kevin Clancy. It was reckless and could even have been red. The Celtic player was clearly far from happy with his opponent.

The Hoops, though, took the lead in the 16th minute with a superb goal with the impressive and influential Jota and Abada combining to unlock the Tannadice side’s rearguard. 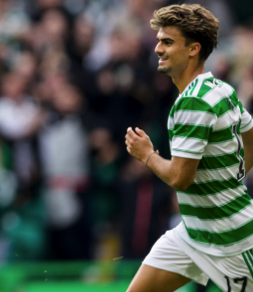 PORTUGUESE PACESETTER…Filipe Jota was one of the star Celts against United.

The on-loan Benfica winger sped down the left before delivering an inviting cross into the box and the Israeli flanker bravely threw himself at the ball to flash a six-yard header away from the helpless Siegrist.

Two minutes later, United levelled after some awful defending by the home side. It started with Cameron Carter-Vickers, under no pressure, giving the ball away with a misplaced pass. The visitors patiently kept possession before Ilmari Niskanen beat Ralston far too easily on the left before picking out the unmarked Ian Harkes who bulleted an unstoppable six-yard header past Joe Hart.

Moments later, Ajeti had an utterly astonishing miss from four yards. Jota and Abada again went through their party pieces before the ball was switched to the unguarded Swiss striker who unaccountably ballooned the ball over the bar with just the keeper to beat. It was a bewildering failure from the unconvincing frontman.

In the 26th minute, Juranovic joined the growing Hoops injury list as he limped off with Adam Montgomery taking his place on the left-hand side of the defence. 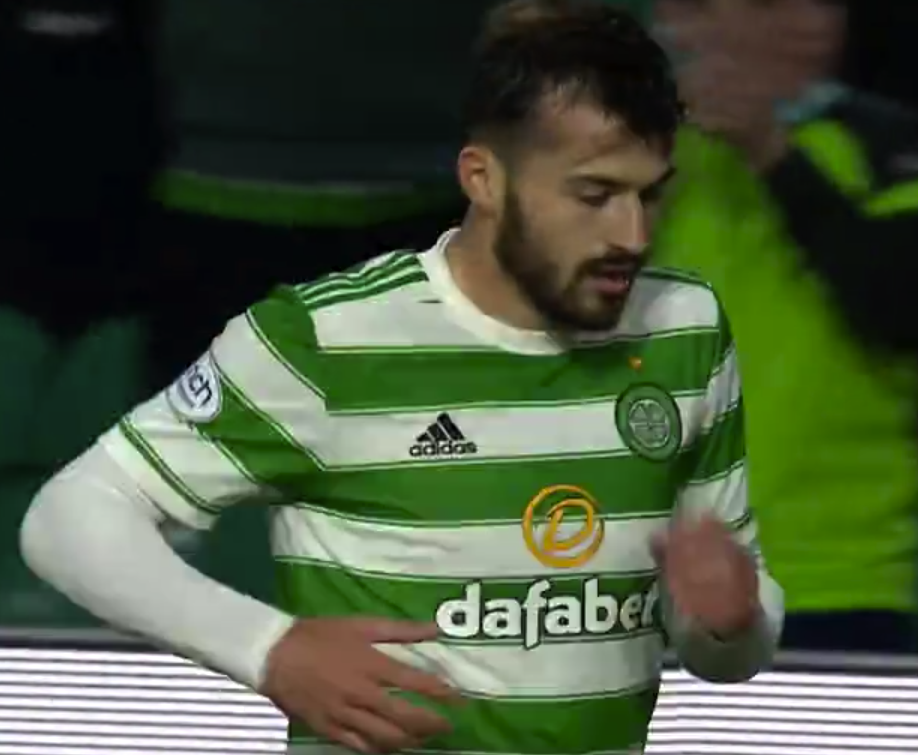 MISFIRING…Albian Ajeti missed a sitter in a day a frustration for the Swiss striker.

Montgomery was in the midst of the action as soon as he entered the fray and he set up Jota who walloped in a low 25-yard right-foot drive which was turned round the post by Siegrist at full stretch.

United escaped again when Jota drilled over an effort from the left which was deflected over the bar by Scott McMann from almost on the line.

And right on half-time, fortune smiled on the visitors again when Turnbull left Siegrist standing with a thunderous left-foot drive from 20 yards. The ball thudded off the underside of the crossbar and bounced down just in front of the line.

Ajeti forced in the rebound, but match official Clancy immediately ruled it off for a nudge by the Hoops forward on an opponent.

McCarthy, who had been on the receiving end of a couple of questionable tackles in the opening period, remained inside at the interval with Ismaila Soro taking his place.

Two minutes after the turnaround, Rogic sent Abada clear, but the flanker’s cheeky lob carried just too high over the bar.

United weren’t slow in coming forward and they were snapping onto loose balls from the Celtic rearguard and Postecoglou will be far from satisfied with the frequency of slack passes from his back lot. 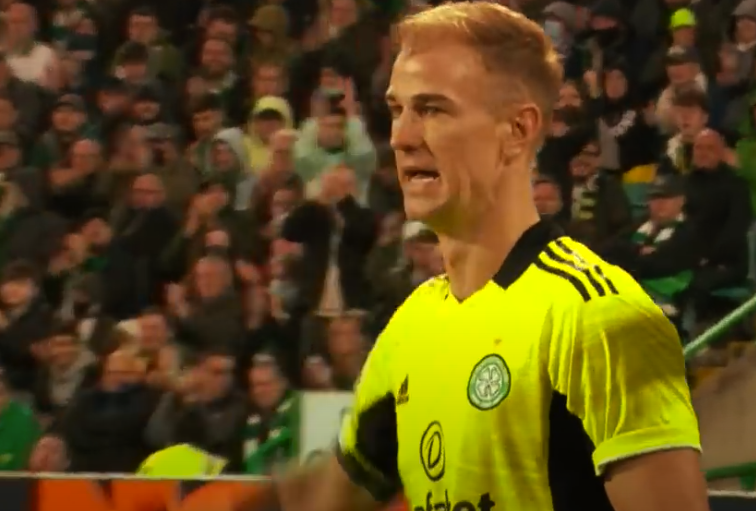 CAPTAIN’S ROLE…Joe Hart cajoled his team-mates throughout the 1-1 draw.

There was a fright for Hart when Niskanen was invited to come inside onto his right foot and he whipped an effort just wide of the far upright. It was too close for comfort.

On the hour mark, some mesmerising footwork by Jota on the left shredded United, but a defender managed to get in a clearing header as Abada challenged.

Soro was looking too slow to get into the pace of the game and twice gave the ball away carelessly to allow the opposition to drive forward. Celtic, it must be said, were creating a lot of their own problems.

Rogic was getting on the ball a lot, but it was a frustrating afternoon for the Aussie with very little going his way.

Abada had to have treatment after taking a kick from keeper Siegrist as they went for a ball outside the box. Clearly, it was a sore one, but ref Clancy didn’t appear to see the incident.

In the 78th minute, Turnbull sent Abada clear on the right and his quickfire cross looked good, but Ajeti got under it and once again the chance was gone. It was another afternoon of huff and puff from the £5million frontman with little in way of a reward.

Hart left his goal to have a word with Soro during a break in play, but whatever the captain said his words fell on deaf ears as the Ivorian continued to misplace passes to surrender possession.

POINT TO PROVE…Ange Postecoglou has his say.

Five minutes from time, Rogic set up Jota, but his elevation was off and his 12-yard strike flew harmlessly over the bar.

Moments later, Jota returned the compliment to Rogic and the midfielder’s header beat Siegrist, but smacked off the underside of the bar and was hastily booted clear.

Then it was Jota’s turn to be denied by the woodwork with a drive from outside the box that arced over Siegrist and bounced off the bar.

It was just one of the those days for Celtic. There’s no arguing with Dame Fortune some times.

Now all eyes are on Parkhead on Thursday night with the visit of Jeremie Frimpong and Bayer Leverkusen in the second Europa League Group G encounter.

After the loss in Seville against Real Betis in the opening fixture, Postecoglou knows the importance of winning the home games and three points are a must in this confrontation.

It must be hoped that some of the injury worries ease before the visit of the Bundesliga outfit.