Even a Hollywood fiction writer would have thought twice about producing such an outrageous storyline.

But that’s exactly what happened at Parkhead this afternoon when the Belgian back-four operator managed to claim the headlines once again.

This time for all the right reasons.

He made his telling contribution in the 63rd minute to make sure all three points remained at the champions.

Whether he remains at the champions is still open to conjecture. You couldn’t make it up.

A banner emblazoned with the words ‘Boyata – not fit to wear the jersey’ was in full view at the start as the Belgian defender lined up for his first appearance for the club since the 2-0 win over Motherwell in the Scottish Cup Final on May 19.

However, there was even a ripple of applause early on when he broke up an Accies attack with some keen anticipation. 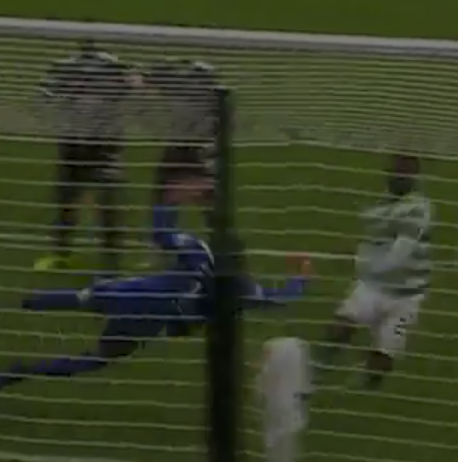 DEADLY DEDRYCK…Boyata makes no mistake from two yards as he turns the ball beyond Gary Woods for the only goal.

In only 30 seconds, the visitors gave the champions a fright when they broke forward and Mikel Miller swept past Kristoffer Ajer on his left-hand side to drill in a low right-foot sizzler.

Craig Gordon, though, reacted with a splendid diving save to his right to push the ball wide of the far upright.

Leigh Griffiths, searching for his magical 100th Hoops goal, was looking lively and was only thwarted by the alert Ziggy Gordon when he broke into the box and the Accies defender got a crucial touch to divert the danger.

In the 15th minute, only a spectacular high-flying save from the blue-clad Gary Woods denied James Forrest the breakthrough goal.

Moussa Dembele set up the winger with a neat touch back in a crowded penalty area and the winger tried to pilot a 12-yard effort high into the keeper’s top left-hand corner of the net.

However, Woods responded with lightning reflexes as he hurtled across his line to claw the ball away for a corner-kick.

Tom Rogic, back in the team after sitting out the 1-1 draw in Lithuania on Thursday, was roaming around the midfield with intent and had two range-finders before the half-hour mark that were just off target.

In the 36th minute, Griffiths had the opportunity to set up Dembele after a smart turn and run on the left, but Gordon got across to clear before the ball reached the French striker. 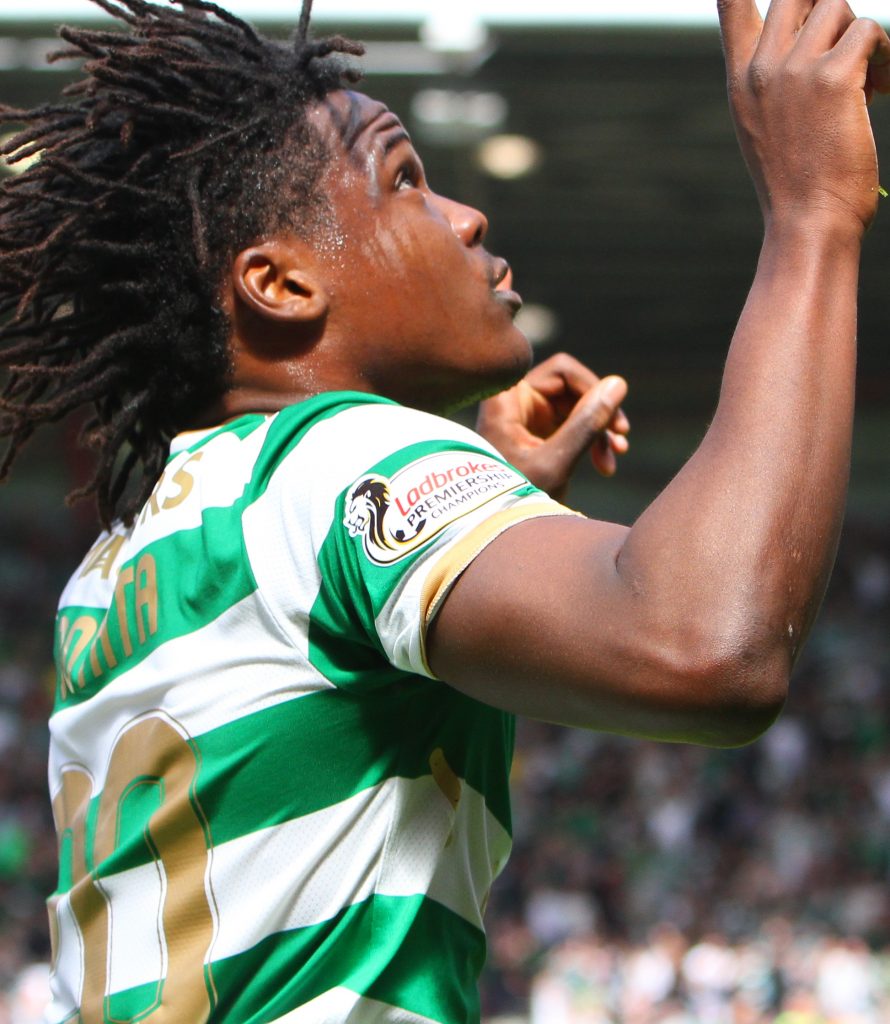 ACTION REPLAY…Dedryck Boyata after his goal against Hearts at Tynecastle in May.

However, Dembele should have done so much better moments later when Rogic and Forrest combined to set up an excellent opportunity. The Celtic fans were already on their feet to acclaim what looked like a certain goal, but his effort went wide of the target with Woods a relieved man.

And the first-half came to a close with the powerhouse striker shifting the ball neatly to his right foot 20 yards out to whip in a drive that clipped the crossbar as Woods struggled to get anywhere near it.

Certainly, it hadn’t been the most enterprising or entertaining 45 minutes witnessed in the east end of Glasgow in recent times with the Accies shotstopper not exactly overworked.

There was a lack of ingenuity in the middle of the park and All-Black Accies were happy enough to drift into defence and pack their box. Clearly, they were not at Parkhead to set the pulses racing with flamboyant football, but boss Martin Canning would have been more than satisfied to see the scoreline blank at the interval.

They escaped early after the turnaround, however, when Callum McGregor was just off target and then Dembele did likewise with a shot after some good work from Kieran Tierney on the left.

The Hoops rolled forward in numbers and the visitors, who had lost 10 of their last 11 visits to Parkhead, continued to clear their lines in an unfussy manner.

Boyata? There didn’t seem any signs of recent injury problems as he patrolled the backline under very little pressure from the visitors. There was some encouragement from the stands every now and again when he moved across to clear up sporadic situations.

On the hour mark, Lustig sent in a far post delivery aimed for Dembele and the French ace rose above a defender, but, unfortunately, his elevation was off and the header flew harmlessly over the crossbar from four yards.

Three minutes later, Tierney’s inviting left-wing cross was booted for a corner by Gordon as Griffiths closed in for the kill.

Remarkably, the  corner brought the breakthrough goal – from Boyata. Fact is, indeed, stranger than fiction.

Griffiths drilled in the left-wing corner-kick that was helped on by Dembele to the far post. Lustig climbed to nod the ball back into the danger zone.

Boyata, amazingly, was all on his own smack in front of goal and the defender knocked the ball into the gaping net with nonchalant ease.

The goal was greeted with the usual acclaim from the the home support, but the Belgian international didn’t appear too excited as he accepted the congratulations from his team-mates.

CENTURIAN IN THE WAITING…that’s Leigh Griffiths who missed the chance to become a Ton-Up Bhoy against Accies.

Rodgers then decided to freshen things up in the 68th minute when he put on Mikey Johnston and Olivier Ntcham for Forrest and Rogic.

Boyata came close to a second goal in the 77th minute after a ball broke to him in the penalty area after some interchanging from Scott Brown, Ajer and Dembele. On this occasion, though, he lifted his hurried effort over the crossbar.

With nine minutes to go, Ryan Christie came on for Griffiths who will have to wait at least one more game before he gets the opportunity to become a Ton-Up Bhoy.

Moments later, Alan McGowan was very fortunate to escape a straight red card for a mid-air assault on Tierney following a long ball from Gordon. The referee was content to flash yellow.

Now there is some unfinished business to take care of on Thursday against FK Suduva when the Hoops must make sure of a place in the Europa League group stages.

And then a week today there will be a rousing reception for Liverpool legend Steven Gerrard as he pits his wits against his former Anfield gaffer.

Three wins out of three in Paradise would be most welcome.