Celtic Quick News on News Now
You are at:Home»Match Report»CELTIC 1 HEARTS 0: HERE WE KYOGO AGAIN AS TRUE GRIT HOOPS GET THEIR REWARD
By CQN Magazine on 2nd December 2021 Match Report

LETHAL Kyogo Furuhashi flashed in his 14th goal of the season to give Celtic three crucial points at Parkhead this evening.

However, this triumph owed as much to true grit, fighting spirit, raw courage and a point-blank refusal to capitulate as much as the devastating finishing skills of the fans’ favourite.

Extraordinarily, THREE Celts limped out of the action against a rugged Edinburgh side who snarled and fought for everything.

Anthony Ralston didn’t even last the first-half before Ange Postecoglou had to rejig his back four with Josip Juranovic switching from left-back to his more accustomed right-sided berth while Adam Montgomery went to the No.3 slot.

MATCHWINNER…lightning-swift Kyogo Furuhashi thumps in the only goal past the helpless Craig Gordon.

The Greek-Australian had to made two more switches within moments of each other in the 71st minute when Filipe Jota pulled up and Mikey Johnston came on in his place.

Stephen Welsh then went down and it was clear he would be unable to continue and that left Postecoglou with no option to put on Nir Bitton into central defence beside Carl Starfelt, who was one of the stars on his return.

The Tynecastle outfit smelled blood and saw their chance with their opponents rocked by three injury setbacks and a team that had to adapt while on the run.

Thankfully, they managed to see it over the line and, when the points are being counted in May, this could be a massive victory for a resilient and grimly determined Celtic side. 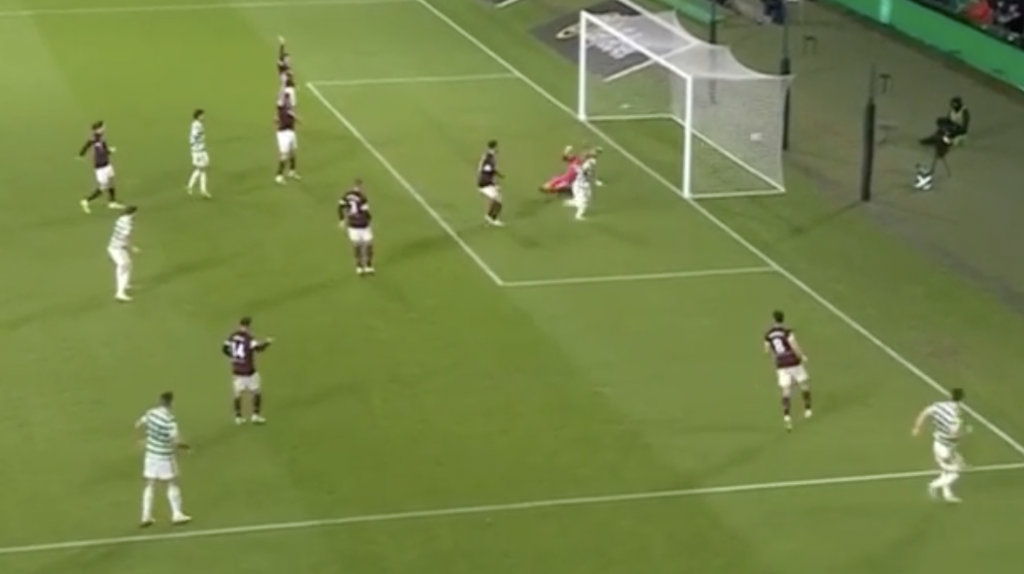 Kyogo, perpetual motion right from the kick-off, claimed the game’s only goal in the 33rd minute when the Hoops shredded the visting rearguard with a series of swift passes with James Forrest knocking the ball in front of Tom Rogic.

The Aussie playmaker nonchalantly rolled a pass into the tracks of the rampaging Ralston storming down the right for the umpteenth time.

The right-back fired a cross into the box and the Japanese striker moved quicker than anyone else to meet the ball first-time at the near post from just inside the six-yard box and his effort thundered beyond the helpless Craig Gordon.

It was nothing more than Celtic deserved after pressing the Edinburgh club into retreat for a great percentage of the opening period.

In fact, Postecoglou’s men should have been celebrating the barrier-breaking goal in the 10th minute, but for an astonishing miss from Forrest from practically under the crossbar. 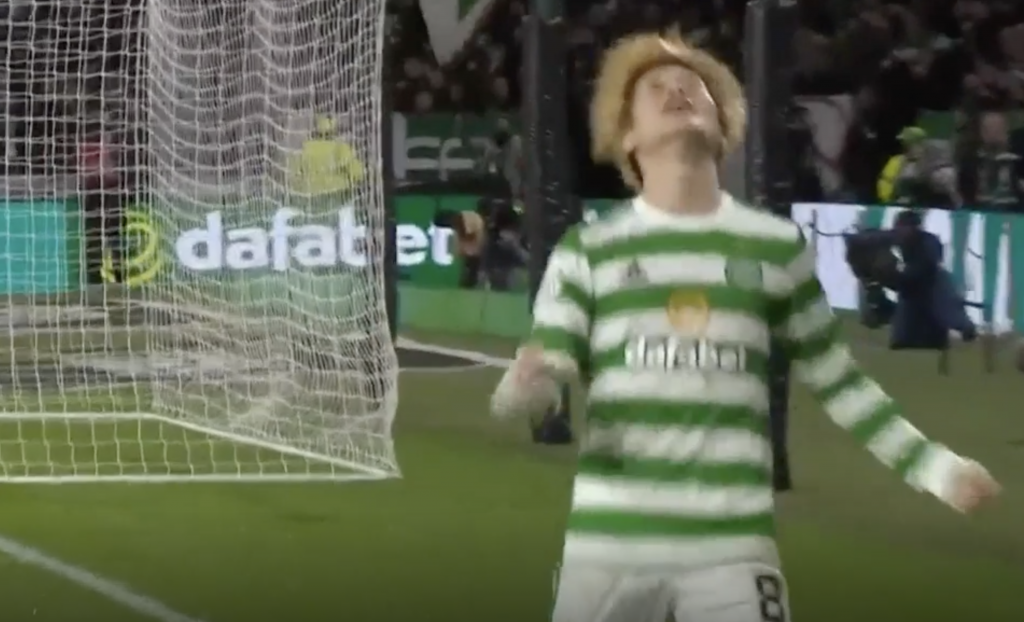 IN PARADISE…Kyogo Furuhashi celebrates his 14th goal of the season.

David Turnbull, another excellent performer on a testing evening, intercepted a clearance from the ex-Hoops keeper and fed a pass to the ever-willing Jota who cut inside onto his right foot to lash a low drive at goal.

Gordon dived to his left, but fumbled the ball into the tracks of Forrest who was so amazed at the gift that he hit the rebound against the upright from smack in front of goal.

Hearts had escaped a few moments earlier when Starfelt, making his return in place of Cameron Carter-Vickers who was missing for “personal reasons”, nodded on a right-wing free-kick from Turnbull, but the ball took a deflection of Stephen Kingsley and swept wide with Gordon rooted to his line. 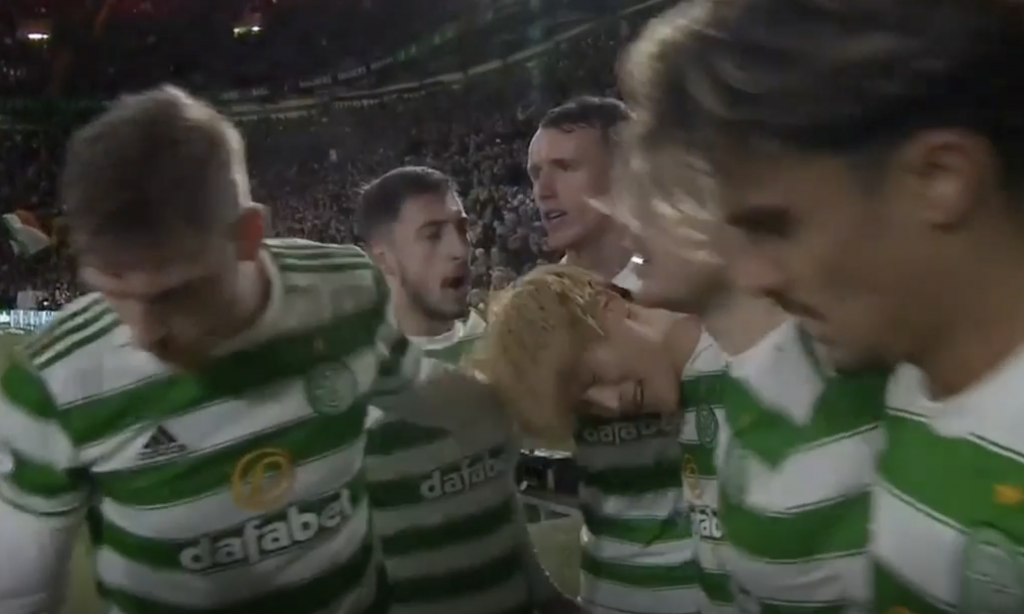 HOOP HOOP HOORAY…Kyogo Furuhashi is congratulated by his delighted team-mates.

Jota then flashed a 20-yarder over the bar with the keeper breathing a sight of relief and Gordon then denied Callum McGregor with a high-flying save to tip his 25-yard drive wide of his right-hand upright.

That was followed shortly afterwards by the withdrawal of the impressive Ralston and Postecoglou’s first revamping of his line-up.

In the 63rd minute, Juranovic had the opportunity to ease the tension when he was picked out by Jota. but the Croatian international, totally unmarked, blazed wildly over the crossbar when at the very least he should have worked Gordon.

Just beforehand, the Hoops had been given a fright when an unmarked Kingsley headed wide from a Barrie McKay left-wing corner-kick. The former Ibrox winger also had an opportunity late in the game, but slashed his effort wide of Joe Hart’s left-hand post. 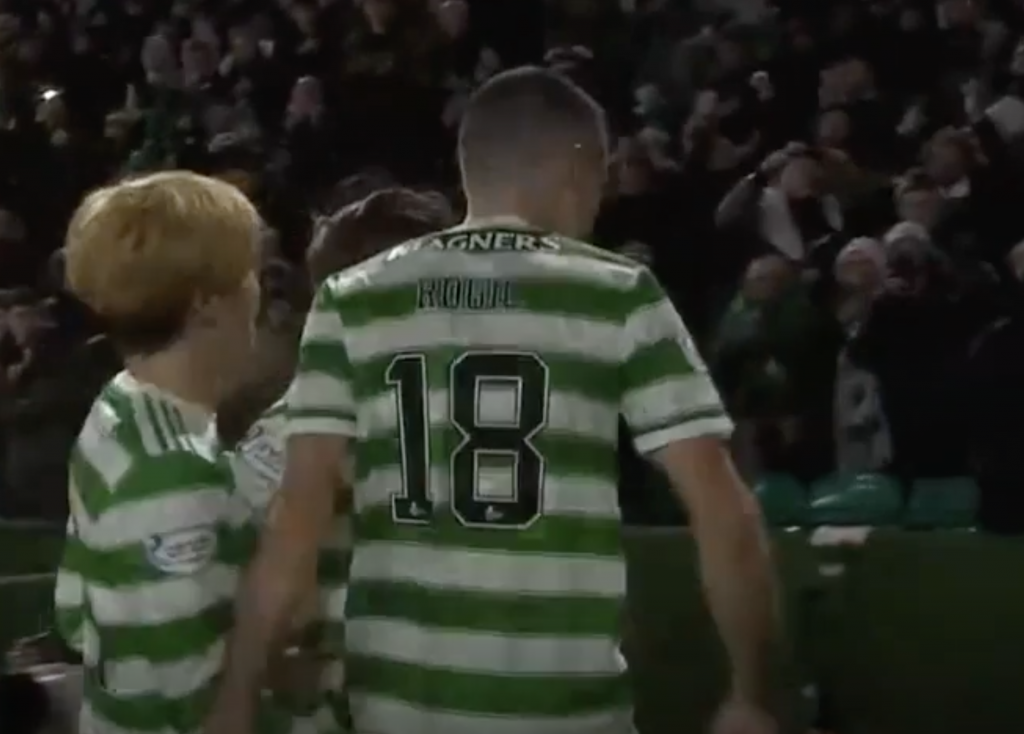 CELEBRATIONS…goalscorer Kyogo Furuhashi and playmaker Tom Rogic share the joy with the fans.

There can be no argument the changes shook Celtic out of their stride, but Forrest blew the chance to settle the issue and atone for his earlier miss when he was set up by Kyogo. With only Gordon to beat, he slammed his effort too close to the netminder who stuck out a leg and diverted the effort wide of the target.

A bit more composure from the experienced Scotland international winger would have saved a lot of anxiety among the home fans as the clock ticked down with five minutes added on in stoppage time.

At the end of the day, there are three more points in the bag and no-one can deny Postecoglou’s gallant performers deserved all they got at the end of a nerve-shredding evening in the east end of Glasgow.