THIS victory will not go down in the annals of fame, but it could prove to be absolutely crucial at the end of the season.

It was more about perspiration than inspiration as Celtic racked up a catalogue of near things throughout a tension-laden 90 minutes-plus in the drizzle at Parkhead this afternoon.

An exquisite finish from Tom Rogic in first-half stoppage time gave the Hoops the three points against a Fir Park outfit who were up for a Sunday scrap.

It wasn’t easy on the eye and Ange Postecoglou will acknowledge the debt they owe keeper Joe Hart who made two magnificent saves with the encounter goalless.

With a fully-fit and functioning Kyogo Furuhashi and Filipe Jota in the line-up, it wouldn’t have been such an afternoon of anxiety for the home fans.

BANG…Tom Rogic watches as his shot flies high past the stranded Liam Kelly for the points-clincher.

In the fourth minute, James Forrest had a shocking miss from six yards when he screwed the ball wide of target with only Liam Kelly to beat.

The build-up was excellent with the winger playing a neat one-two with Callum McGregor to go clean through, but he lost his composure when it mattered most and rolled an effort wide of the keeper’s left-hand post.

Kelly might have got a touch, but he really should have been left helpless the moment Forrest was set up by his skipper.

Moments later, Liel Abada and Josip Juranovic combined on the right to set up a chance for Rogic, but his first-time drive was diverted by a frantic defender as it sizzled towards the net.

Without a recognised main striker, David Turnbull appeared to be in the false nine position with Abada and Forrest on the flanks and Rogic further upfield in support.

WHAT A MISS…James Forrest fails to give Celtic an early lead as his timid effort eludes the target with keeper Liam Kelly grounded.

There was a scare for the Hoops in the 13th minute when Nir Bitton surrendered possession and the ball was worked swiftly to Callum Slattery who let fly with a left-foot effort from 20 yards.

Joe Hart was at full stretch to his right as the ball thumped against the top of the crossbar and bounced to safety.

The Hoops’ injury jinx struck again in the 18th minute when Forrest went down in obvious distress. After a few moments, it was clear he would not be fit to continue and Mikey Johnston came on in his place as a straight swap wide on the left.

Referee Euan Anderson incensed the home support when he failed to show a card after Bevis Mugabi floored Rogic. It was a cynical foul that prevented the Aussie from moving into an attacking position. It was an obvious booking, but the Well defender got away with his indiscretion. 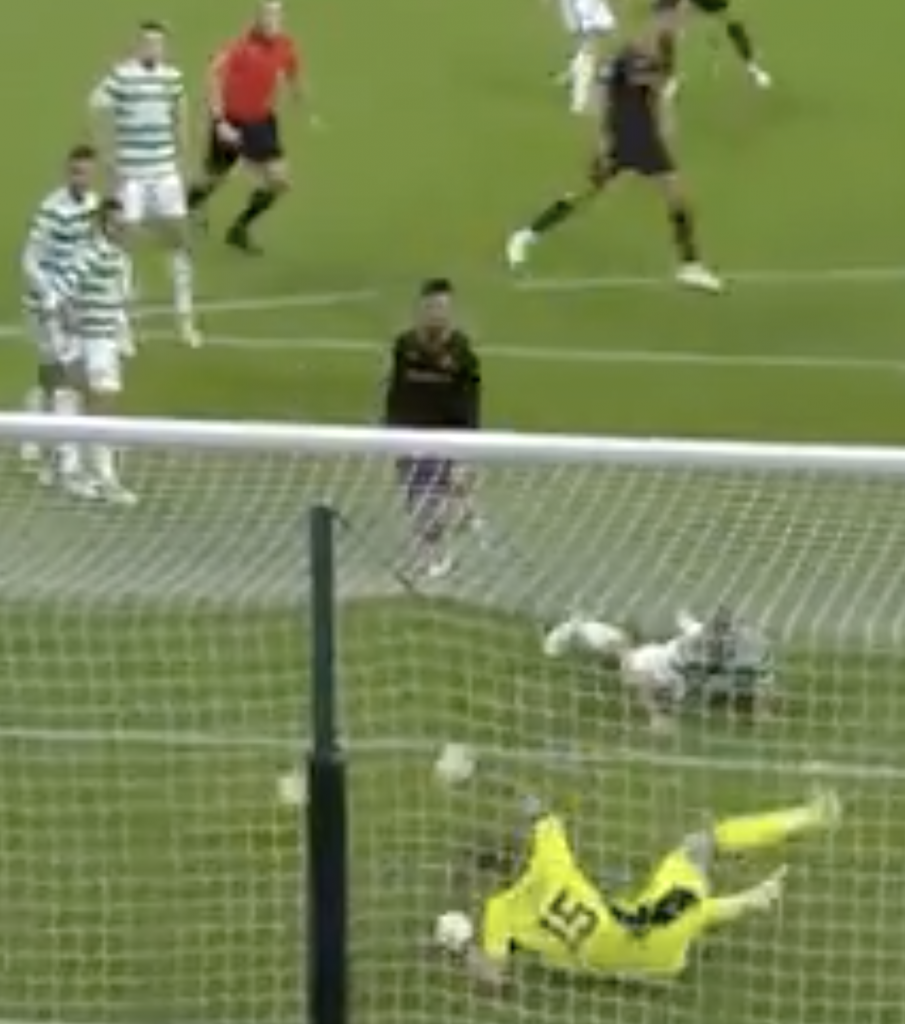 HART STOPPER…keeper Joe Hart changes direction to plunge to his left to push away a deflection from the grounded Cameron Carter-Vickers.

In the 25th minute, Hart twice thwarted Well to protect his goal. The 34-year-old keeper made a breathtaking save to keep out a deflection from Cameron Carter-Vickers after a shot from Sean Goss. The ball broke loose and once more the defiant netminder spread himself bravely to block a follow-up effort.

It was a brilliant piece of goalkeeping from the man who earned 75 international caps for England and who has become such a key performer for Postecoglou since his arrival early in August.

Worryingly, Celtic looked disjointed and clearly missed the injection of pace normally provided by the injured Kyogo and Filipe Jota in attack. Their goal threat was also markedly absent. 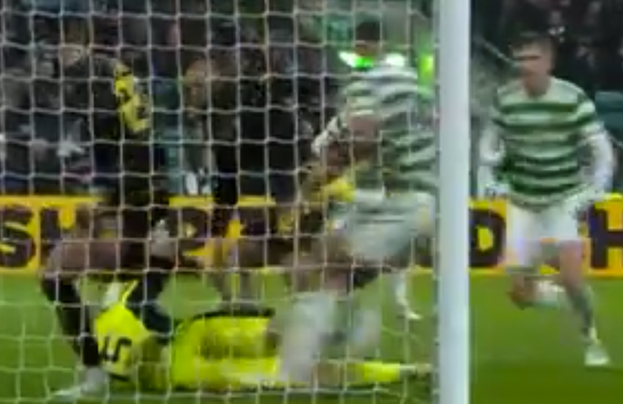 IN THE THICK OF THE ACTION…Joe Hart goes down bravely to defy Motherwell attackers.

However, a flash of trickery from Johnston almost unlocked the backdoor when he cut in from the left to zip a low right-foot drive past the scrambling Kelly, but the ball whipped just wide of the the right-hand upright.

Ex-Celt Tony Watt escaped a yellow card shortly afterwards when he clearly tripped Johnston, but the match official looked the other way.

Seven minutes from the interval, an amazing reflex save from Kelly kept out a deflected 20-yard effort from Turnbull. The keeper appeared to be going the wrong way until he flicked out a left hand to divert the ball over the bar.

Jake Carroll clearly deflected a shot from Johnston past the post, but the ref missed that, too, and refused the Celt’s claim for a corner-kick.

Slattery, who had been spoken to earlier,  was booked after a wayward challenge on Johnston that saw the Hoops awarded a decisive free-kick. 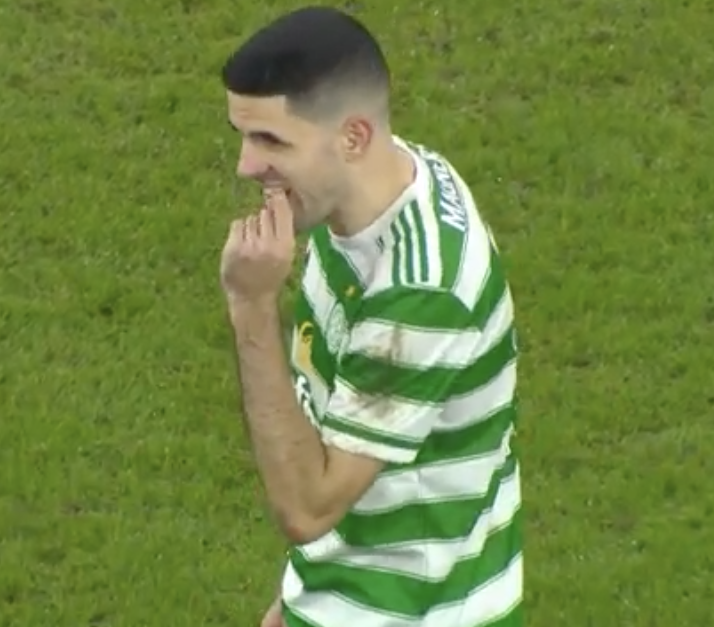 SOMETHING TO CHEW OVER…Tom Rogic after scoring the only goal of the game.

With the game nudging into first-half stoppage time, Turnbull rolled the ball across the penalty area and Rogic, completely unmarked, produced a mesmerising finish to guide a left-foot drive high past the keeper to his right.

The goal had been a long time coming and was well deserved. It was greeted with as much glee as relief by the fans who had encouraged the team from the start.

Celtic started the second-half on the front foot when Rogic had a shot saved at the right-hand post by Kelly and then the Aussie playmaker released Abada who picked out Greg Taylor, but his hurried shot was blocked by Stephen O’Donnell.

Johnston, desperate to score a goal after a lengthy barren period, then walloped a right-foot drive wildly over the top.

The Hoops kept the pressure, but it was obvious they were missing the cutting edge provided by an out-and-out striker.

That fact was emphasised in the 57th minute when Abada set up Rogic just inside the box, but his first-time right-foot effort was wretchedly off target as it flew, high wide and horrible. 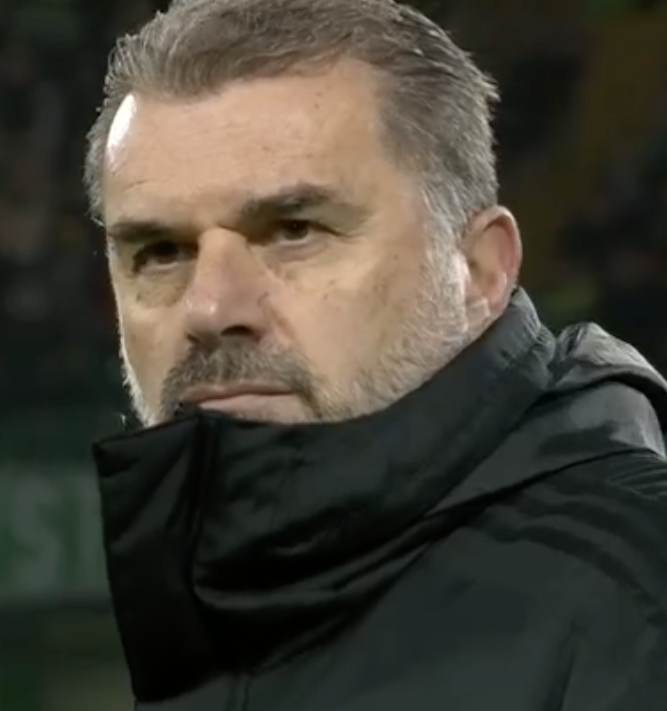 WATCHING BRIEF…Ange Postecoglou looks on as Celtic grind out a win against Motherwell.

In the 64th minute, Johnston was denied when he sent in an eight-yard header from a sublime cross from Rogic, but Kelly once agin proved equal to the task when he got down quickly to his right to push the effort for a corner.

And it was Kelly to the rescue again at his near post when Turnbull picked out Taylor with a cute set-play, but the defender’s close-range effort was bocked by the Well netminder.

In the 70th minute, Celtic took a clever corner-kick on the left with a neat little trick between Taylor and Turnbull, but it was too smart for ref Anderson who called it back to be taken again. The whistler was not having one of his best days. 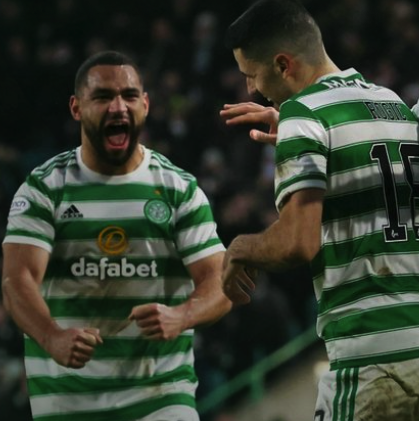 Anthony Ralston came on for Johnston in the 78th minute with Abada switching to the left.

Moments later, Rogic passed up a fabulous opportunity to double the advantage after Ralston had sent Juranovic scampering clear on the right. The Croatian international picked out the unmarked Aussie, but he ruined the move by slashing the ball well off target. It was a dreadful miss.

Thankfully, it didn’t matter in the end, but this win was anything but comfortable.